Biden calls for prosecutions of those who defy Jan. 6 committee 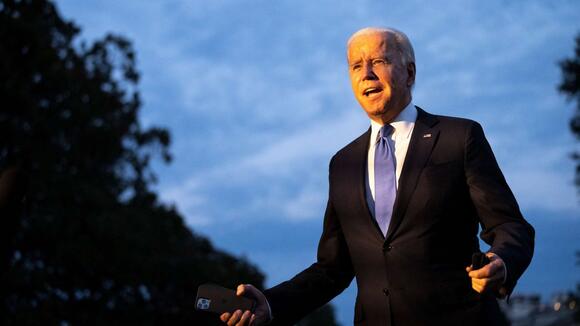 "The Department of Justice will make its own independent decisions in all prosecutions based solely on the facts and the law. Period. Full stop," DOJ spokesperson Anthony Coley said.

The statement came after comments from Biden following his arrival back at the White House Friday when he was asked what his message is for those who defy subpoenas from the Jan. 6 select committee.

"I hope that the committee goes after them and holds them accountable," Biden said after returning from a trip to Connecticut.

When asked whether he thinks those individuals should be prosecuted by the Justice Department, Biden answered, "I do, yes."

Biden's comments came just a day after the House committee investigating the Jan. 6 insurrection announced it would meet next Tuesday to consider criminal contempt proceedings against Steve Bannon, a former Trump aide who has refused to comply with a subpoena seeking testimony and any communications he may have had with with the former president in the days around the storming of the Capitol.

As both a candidate and while in office, Biden has repeatedly pledged to put up a wall between the White House and the Justice Department on criminal matters that critics had argued had completely deteriorated during his predecessor's years - where Trump repeatedly called for the prosecutions of his political enemies and pressured officials to take actions they later said they resisted.

"Though the Select Committee welcomes good-faith engagement with witnesses seeking to cooperate with our investigation, we will not allow any witness to defy a lawful subpoena or attempt to run out the clock, and we will swiftly consider advancing a criminal contempt of Congress referral," the committee said in a statement.

Prior to their statement Friday seemingly pushing back against Biden's comments, the Justice Department has repeatedly declined to comment to ABC News on how it might act if and when the U.S. House votes for a criminal contempt referral stemming from a Jan. 6 committee witness declining to cooperate.

Pelosi was 100% the one who invited ANTIFA and told the cops to stand down. but hey, track every cell phone and arrest everyone else, costs a lot more and serves no justice.

right it is you and your administration that should be prosecuted but mainly you and you son. such wastefulness of tax payer money like they have wasted all of tax payers money

What a waste of Taxpayers money. How about going back to energy independence Joe? How about not taking money from special interest groups, how about term limits for this fkd up administration!

The House Select Committee to Investigate the Jan. 6 Attack on the U.S. Capitol has been busy. In the five months since the probe was launched, the committee has issued dozens of subpoenas to high-profile members of former President Trump’s circle, as well as a smattering of other MAGA-affiliated figures involved in the effort to overturn the results of the 2020 election. The process has been fraught for a number of reasons, but revelations that have emerged from Rolling Stone’s conversations with cooperating sources indicate the committee could be sitting on a mountain of material — material that could clarify what...
CONGRESS & COURTS・21 HOURS AGO
The Guardian

John Eastman is the second witness who has invoked or plans to invoke the Fifth Amendment in response to a January 6 committee subpoena.
PRESIDENTIAL ELECTION・18 HOURS AGO
The Independent

The attorney, who helped former President Donald Trump contest the 2020 election, asserted his right against self-incrimination in a Dec. 1 letter to the Capitol riot panel.
WASHINGTON, DC・18 HOURS AGO
US News and World Report

Transportation Secretary Pete Buttigieg, in North Carolina on Thursday for an event promoting the new infrastructure law, had nothing but gushing praise for Vice President Kamala Harris, who in turn lauded the agenda of the man who beat both of them in the 2020 Democratic presidential primary: President Joe Biden.
PRESIDENTIAL ELECTION・1 DAY AGO
MarketWatch

President Joe Biden on Friday signed a bill that will keep the federal government running through Feb. 18, resolving the threat of a weekend shutdown. Washington is staring down other must-pass items, however, including raising the debt limit and an annual defense bill. Top Democrats are also aiming to pass Biden's massive social-spending and climate bill in the Senate before Christmas, though that timeline could slip.
WASHINGTON STATE・16 HOURS AGO
Business Insider

The House committee investigating the Jan. 6 Capitol insurrection has postponed a deposition with a former Justice Department official Saturday due to a “medical condition that precludes his participation," according to a panel spokesman. The committee had scheduled the second interview with Clark, who had aligned himself with former President Donald Trump last year as he tried to overturn his defeat, after Clark declined to answer questions at his first deposition in November. The panel voted Wednesday to recommend contempt charges against Clark but said it would hold off on a vote of the full House and give him...
CONGRESS & COURTS・11 HOURS AGO
WashingtonExaminer

Wyoming Republican Rep. Liz Cheney, vice chairwoman of the House select committee tasked with investigating the Jan. 6 attack on the U.S. Capitol, issued a warning to former President Donald Trump amid his posturing that he wanted to debate members of the committee: Lie, and there will be criminal penalties.
CONGRESS & COURTS・2 DAYS AGO
Markets Insider

Manchin may be about to hand his party a lump of coal when it comes to passing Biden's spending bill. He's not onboard with passing it by Christmas, risking a lapse in monthly checks to families. "No question that it would be a blow to lower-income and middle-class households," one...
ELECTIONS・34 MINUTES AGO
Washington Post

Over four years in the White House, President Donald Trump proved exceptionally adept at using his office to manipulate the legal system. But the Constitution gives no role — or powers — to ex-presidents. The result is that Trump’s run of evading accountability may finally be ending, as most recently shown by an appellate court’s skepticism Tuesday toward his attempt to block the House Jan. 6 Committee investigation.
PRESIDENTIAL ELECTION・2 DAYS AGO

(CNN) — Then-President Donald Trump tested positive for Covid-19 three days ahead of his first 2020 presidential debate with Joe Biden -- though he also had a negative result in that same timeframe, according to excerpts from a forthcoming book from the former Republican president's chief of staff reported by The Guardian.
PRESIDENTIAL ELECTION・2 DAYS AGO
Seattle Times

News organizations side with Bannon in battle to get Jan. 6 prosecution documents

A coalition of news organizations, including The Washington Post, has sided with former Trump White House adviser Stephen Bannon in asking a federal court to release documents that are part of Bannon’s prosecution for refusing to testify before the Jan. 6 congressional committee. Bannon is fighting a proposal by prosecutors...
CONGRESS & COURTS・2 DAYS AGO
The Guardian

The House committee investigating the Jan. 6 attack on the U.S. Capitol interviewed Georgia Secretary of State Brad Raffensperger for several hours Tuesday in a meeting that included discussion of former President Donald Trump's efforts to overturn the 2020 election results. “I spoke to the January 6th committee to ensure...
GEORGIA STATE・3 DAYS AGO

Jan. 6 panel to vote on contempt against former DOJ official

If approved by the panel, the recommendation of criminal contempt charges against Clark would go to the full House for a vote as soon as Thursday.
CONGRESS & COURTS・2 DAYS AGO
Washington Examiner

The recent revelation that Speaker Nancy Pelosi’s Jan. 6 committee issued a subpoena based on blatant lies is just one more indication of that mob’s illegitimacy. The train of abuses includes stacking the committee with Trump-haters and belligerently biased members of Congress, removing Republicans from the committee who were appointed by Republican Leader Kevin McCarthy, and issuing a bogus contempt citation of Steve Bannon, who was awaiting a judicial determination on former President Donald Trump’s claim of executive privilege.
WASHINGTON, DC・3 DAYS AGO
WAFB.com

WASHINGTON (AP) — Mark Meadows, Donald Trump’s former chief of staff, is cooperating with a House panel investigating the Jan. 6 Capitol insurrection and providing some documents, putting off for now the panel’s threat to hold him in contempt, the committee’s chairman said Tuesday. But the panel “will continue to...
CONGRESS & COURTS・3 DAYS AGO
USA TODAY

House Jan. 6 committee to vote Wednesday on whether to hold former DOJ official Jeffrey Clark in contempt for defying subpoena

A House panel will vote Wednesday on whether to hold former DOJ official Jeffrey Clark in contempt for defying a subpoena in the Jan. 6 probe.
CONGRESS & COURTS・4 DAYS AGO