After 5 straight ALCS trips, are the Astros a dynasty? 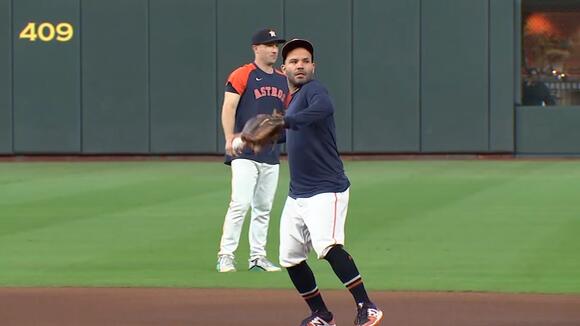 After making five straight American League Championship Series, some Astros fans are starting to wonder if you can call the team a dynasty. While the Astros are once again in the ALCS, there's no doubt the past five years have been special. "They've got to enjoy this ride, because it doesn't happen," University of Houston associate professor Demetrius Pearson said. Pearson works in sports and fitness administration at the University of Houston. His professional background has allowed him to acquire a wealth of sports history. What he's seen out of Minute Maid Park has been historic. "A very successful run," Pearson said. "Let's be frank. They have done some things that certainly Astros teams haven't done in the past." Successful, yes. But, are the Astros a dynasty? The term is used to define teams that have dominated for several years. This year is the fifth straight ALCS trip for the 'Stros. "I think that's a little premature right now," Pearson said. "Yes, they've been most successful over the past five years." Pearson said another championship would help. Even if the Astros won, there might be some doubts because of the 2017 cheating scandal. SEE ALSO: White Sox reliever implies Astros may have been stealing signs in Games 1 and 2 of ALDS Pearson said don't let rumors ruin this run for you. "There are always going to be haters out there, and those who are less successful are going to be most vocal about the past," he said. In the 90's, the Rockets won back-to-back. A World Series win this year would give the Astros another trophy, this time stamped 'D' for dynasty. "They've made their mark," Pearson said. "There's no question about it, and they are on the brink of being a dynasty." To get the second title, the Astros first have to get through the team that knocked them out of the 2018 postseason: The Red Sox. Follow Nick Natario on Facebook , Twitter and Instagram .

Carlos Correa has made an official decision on his qualifying offer from the Houston Astros. Correa has declined the Astros’ $18.4 million qualifying offer, according to Jon Heyman. His days in Houston are over. The 27-year-old star is now the top free agent in baseball and is bound to receive...
MLB・15 DAYS AGO
NJ.com

Houston, we have a problem. The New York Yankees watched the Astros swoop in Wednesday and sign free-agent right-hander Justin Verlander to a one-year, $25 million contract. That’s good money for a 38-year-old coming off Tommy John surgery. The Yankees were among a handful of teams linked to the two-time...
MLB・12 DAYS AGO
ABC13 Houston

After four months in Houston, the hard-throwing righthander is taking his talents to Chicago.
MLB・6 DAYS AGO
FanSided

The Houston Astros were able to get a deal done with Justin Verlander. What will their starting rotation look like next season?. Justin Verlander is officially going back to the Houston Astros. After initially turning down Houston’s qualifying offer, the talented and experienced starting pitcher came to an agreement with the Astros.
MLB・12 DAYS AGO

Astros Confident That Justin Verlander Will Bounce Back After Surgery

Houston Astros righty Justin Verlander is one of the greatest starting pitchers of his generation, but MLB fans haven’t seen him on a big-league mound since July of 2020. That’s because the veteran underwent Tommy John surgery last fall. Anytime a pitcher undergoes Tommy John surgery, it raises some questions...
MLB・11 DAYS AGO
CBS Sports

Justin Verlander's first career foray into free agency did not last long. Verlander is returning to the Houston Astros after declining the one-year, $18.4 million qualifying offer prior to Wednesday's deadline. His younger brother, Ben, broke the news on Twitter. Contract terms are unknown. Verlander has not pitched since Opening...
MLB・12 DAYS AGO
Houston Chronicle

Free-agent righthander Justin Verlander rejected a one-year, $18.4 million qualifying offer from the Astros on Wednesday, finalizing an outcome that felt foregone as the past week progressed. But 37 minutes after rejecting the qualifying offer, Verlander and the Astros agreed to a one-year contract worth $25 million with a player...
MLB・12 DAYS AGO
Bleacher Report

The Houston Astros are reportedly "being ultra aggressive" in the pursuit of free-agent Starling Marte, according to Bob Nightengale of USA Today. Houston already made one big move this week after re-signing Justin Verlander on a one-year, $25 million deal, per ESPN. The team has other tough decisions this winter...
MLB・12 DAYS AGO

Bill Virdon, who starred as MLB player and manager, dies at 90

Bill Virdon, the 1955 National League Rookie of the Year who later won Manager of the Year awards in both leagues, has died at the age of 90, the Pittsburgh Pirates announced Tuesday. Virdon was given his first opportunity to be a manager in 1972 by the Pirates -- with...
MLB・7 DAYS AGO
ABC13 Houston

The Houston Astros have agreed to a two-year, $17 million deal with right-handed reliever Hector Neris, a source confirmed to ESPN. Neris, 32, started the 2021 season as the closer for the Phillies but lost the job in June. He finished the season with a 4-7 record with 12 saves and a 3.63 ERA in 74 games.
MLB・3 DAYS AGO
Sportsnaut

As the 2021 season concludes, baseball fans and teams are excited for the exciting crop of MLB free agents who
NFL・6 HOURS AGO
FanSided

The Houston Astros added a high-leverage reliever on Saturday in Hector Neris, and while we wait for the deal to become official, the 40-man roster holds one spot for two signings. The other, of course, is Justin Verlander, who re-signed with the ball club over a week ago. There has...
MLB・2 DAYS AGO
Inside The Phillies

That’s how some teams approach MLB free agency, including the New York Yankees, who are just two years removed from handing ace Gerrit Cole a record-setting nine-year, $324 million contract. Expect general manager Brian Cashman to do some more spending this winter, according to SNY MLB insider John Harper, who...
MLB・22 DAYS AGO
FanSided

The Atlanta Braves are on top of the world, and rightly so. But just as the World Series ends, the offseason begins. These Braves won’t be back to potentially repeat. The Braves surprised all of baseball, taking a team without Ronald Acuña, Jr. and a suspect bullpen to the MLB mountaintop. Now, Alex Anthopoulos must start all over again.
MLB・27 DAYS AGO
bleachernation.com

If you want to know what the ABSOLUTE FLOOR is for a Carlos Correa free agent contract, the Houston Astros just supplied it. After reports of previous extension efforts that came up well short, the Astros have made an offer to retain Correa now that he is actually on the doorstep of free agency:
MLB・23 DAYS AGO
The Spun

Former Mets pitcher Pedro Feliciano reportedly passed away in his sleep on Sunday night. ESPN’s Eduardo Perez first had the news on his Twitter account on Monday morning. Feliciano was just 45 years old and was reportedly jet skiing on Sunday with his family. Feliciano played nine seasons in the...
MLB・22 DAYS AGO
Larry Brown Sports

Freddie Freeman has donned only a single uniform throughout his Major League Baseball career. And if the Atlanta Braves have their way, it’s the only uniform he’ll ever wear. But the path to that end may not come without come some hiccups. Freeman is currently a free agent and seeking...
MLB・17 DAYS AGO