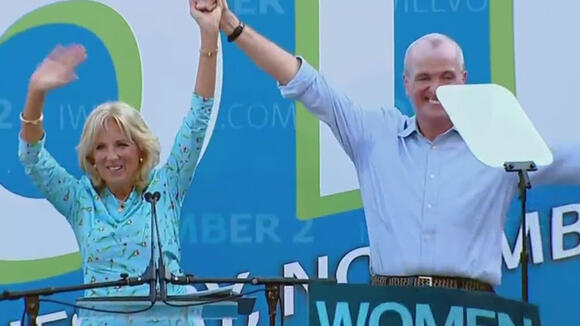 First Lady Dr. Jill Biden spent part of Friday in New Jersey, campaigning for Murphy in his bid for re-election.

The event at Middlesex College in Edison was to urge voters to head to the polls for early in-person voting, which is being offered for the first time in New Jersey.

The rally was said to be one of Biden’s first major campaign stumps since becoming First Lady.

“I’m so excited to be here today. Even though I’m a Philly girl, I was born, like Phil said, in Hammonton, New Jersey, so I’m so glad to be back in my other home state,” she said.

Meanwhile, Ciattarelli has announced that the GOP’s national chair will join him for a campaign rally next week.

Ronna McDaniel will attend an event on Tuesday at the Burlington County GOP headquarters in Medford. The rally is also to support legislative candidates.

Just sad man. White House is in shambles. Pushing socialism. No products to be bought and sold . Inflation burning like a California wildfire. Folks. Welcome to your NEW NORMAL. Kick these non Americans to the curb.

Bet we have mask mandates for restauants,restaurants, school attendance if Murohy gets in again; he's just waiting until after the election. We will be just like California.

Meanwhile, Joe has his Scooby-Doo pajamas on, eating his ice-cream and drawing in his favorite coloring book.

NEW YORK (CBSNewYork) — Amid growing concerns over the Omicron variant, New York City Mayor-elect Eric Adams has traveled to Ghana in West Africa. Adams says the trip carries great importance to him: “I made a promise to myself that I would visit Ghana following the 400-year anniversary of slavery in America and the election, to show how far we have come and remember how far we still must go. This election to me was, among other things, about resetting a negative narrative so that we can have a more just and united future. I will continue to be in contact with...
NEW YORK CITY, NY・11 HOURS AGO
CBS New York

PATERSON, N.J. (CBSNewYork) — More than 6 million people in New Jersey are fully vaccinated. That includes people who work, study or live in the Garden State. CBS2’s Leah Mishkin went to Paterson on Tuesday to see how the city is once again leading the way in getting people vaccinated. Andre Sayegh, the mayor of Paterson, gave the room a thumb’s up in the morning after getting his COVID-19 booster shot. “The best weapon is this vaccine,” Sayegh said. With a new variant inching closer, he said now is the moment to redeploy and double down. The mayor has recruited a team he calls...
PATERSON, NJ・8 HOURS AGO
CBS New York

NEW YORK (CBSNewYork) — New York City Mayor-elect Eric Adams wants judges to use discretion when considering bail. He was asked about bail reform and keeping the city safe Wednesday on “The View.” “You can’t have someone arrested with a gun on Monday and then out on the street on Tuesday. As the mayor, I appoint criminal court judges, and I am going to be extremely clear. You must make sure that those who are posing imminent threat to our city, they are not going to be placed back on my streets and back into my community,” Adams said. Adams says he would like for judges to utilize Kendra’s Law to compel people with severe mental illness to take medication and undergo psychiatric treatment.
NEW YORK CITY, NY・6 DAYS AGO