‘I Know A Lot Of People Who Have Quit’: Friday Deadline For Boston Hospital Employees To Get COVID Vaccine 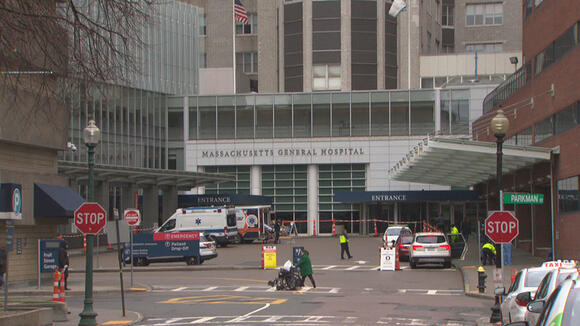 BOSTON (CBS) – Friday was deadline day at three major hospitals in Boston. “I know a lot of people who have quit their jobs because they didn’t want to get the vaccination,” said nursing student Ariana Tanner. She works at Massachusetts General Hospital where employees were told to show proof they’ve had shots against COVID-19 by Friday, October 15th.

“I know a lot of employees are not getting vaccinated,” said Oyuky Vilchis, who works at the information desk. Mass General Brigham, which oversees both Mass General and Brigham and Women’s Hospital, sent a message to employees Thursday. “Non-compliant workforce…will be placed on unpaid leave and lose Epic and network access at the end of their shift on Wednesday.” They then have until November 5th to either show documentation or be fired for good.

“I’ve been on the front lines, and so we have felt exposed,” said Mass General cardiologist, Dr. Jonathan Passeri. “It’s a lot better now that we’ve had the vaccine. Last year it was very difficult to be taking care of patients with COVID.”

That’s why 97% of employees have reported being vaccinated at Mass General, Brigham, their affiliates, with the same percentage at Boston Medical Center. That leaves more than 2,100 unvaccinated employees combined.

While BMC says it will have no impact on patient care, the tension can be heard in the voices of healthcare workers across the city. “It’s hard,” one medical assistant confided. “What do you do? You know you’ve got to take care of the people who are most vulnerable, which are patients, but you also have to take care of people who want to make a living. I wouldn’t want to be in the position of making the decisions that they’re having to make,” she said.

Other major hospitals in Massachusetts also have vaccination mandates in place, but their employees still have a few weeks to comply before those deadlines at the end of the month and beginning of November.

Don't quit, let them terminate you, so later on if the SCOTUS rules that this mandate was illegal, then they'll have to give you back the job plus all the back pay!

It takes a lot of nerve to place mandates on a portion of the workforce that basically stood up and volunteered through COVID-19.

To the person stating the terminated can get unemployment for the mandate, here in Massachusetts the law states that no you don't qualify for unemployment because it was basically your choice/choices.

COVID-19 Vaccine: The WHO Warns Vaccinated People of Having a “False Sense of Security”

Some people had gotten vaccinated for COVID thinking that they won’t have to take other precautions anymore. Some of them were thinking that the pandemic is approaching its end in this way, but the World Health Organization (WHO) is once again there to practically say “not so fast!”. The WHO...
PHARMACEUTICALS・1 DAY AGO
CBS LA

MORENO VALLEY (CBSLA) — Hundreds of people at two Riverside County community centers mistakenly received Pfizer COVID-19 doses that were frozen longer than manufacturer recommendations, according to Riverside University Health System officials. Staff discovered on Tuesday that the vaccine doses had been administered to 324 patients in Jurupa Valley on Mission Boulevard between Oct. 8 and Nov. 23, and Riverside Neighborhood Clinic on Indiana Avenue between Oct. 23 and Nov. 23, health officials said. The doses in question were found to have been stored in the freezer longer than manufacturer recommendation. In spite of their “improper storage from freezer to refrigeration to administration,” the doses do not pose a danger to patients. However, the doses may have lost their potency, and officials say the CDC recommends these patients get a repeat dose as soon as possible. Riverside University Health System staff is reaching out to the impacted patients, and implementing measures to prevent this incident from happening again. Officials say patients who received a Pfizer at these locations, but are not contacted by staff, are not impacted by this storage issue. However, people who are concerned that they received their doses at these locations during these time frames can call (800) 945-6171.
RIVERSIDE COUNTY, CA・1 DAY AGO
The Times Herald

When 32-year-old Marysville resident Sydney Jowett went to the hospital for a COVID-19 infection, her greatest fear was dying and leaving behind her children. "I'm just thankful to be alive because all of the nurses and doctors there didn't think I was going to be able to make it," Jowett said.
MARYSVILLE, MI・2 HOURS AGO
CBS Boston

BOSTON (CBS) — The Massachusetts Department of Public Health reported 5,058 new confirmed COVID cases and 24 additional deaths in the state on Friday. The numbers reflect a two-day period as the state did not report any COVID-related data on Thanksgiving. Health officials said the total number of confirmed cases in the state is now 847,030. The total number of confirmed deaths is now 18,939. There were 171,111 total new tests reported. As of Friday, the seven-day weighted average of positive tests in Massachusetts is 3.37%. There are 771 people currently hospitalized for a coronavirus-related illness. There are also 156 patients currently in intensive care.
MASSACHUSETTS STATE・1 DAY AGO

Some states know a lot about vaccinated people who have gotten COVID-19. Pennsylvania doesn't

PHILADELPHIA — Each week in Oregon, state health officials produce a public report documenting how many people have contracted the coronavirus even after getting the vaccine, including data about their ages, races, the counties where they live, which COVID-19 variants they caught, and how sick it made them. That type...
PENNSYLVANIA STATE・2 DAYS AGO
Daily Mail

About one million Victorian workers must now be fully vaccinated to continue working after a major vaccination deadline passed overnight. All those in jobs on the state's authorised worker list were required to have two doses of a COVID-19 vaccination by Friday, November 26. Industries on the list include AFL...
WORLD・2 DAYS AGO
WSET

Carilion Clinic to require employees get COVID-19 vaccine by January

ROANOKE, Va. (WSET) — The Carilion Clinic is joining other hospital systems in Central Virginia by mandating employees get the COVID-19 vaccine. Carilion officials said it must comply with the Centers for Medicare and Medicaid Services mandate. The mandate requires healthcare organizations to fully vaccinate their teams as a term...
ROANOKE, VA・3 DAYS AGO
Whitefish Pilot

Logan Health to require all employees to get COVID vaccine

Logan Health is requiring its entire staff to have received at least once dose of the Covid-19 vaccine by Dec. 6 in order to comply with a federal rule announced earlier this month. In a message sent to staff on Tuesday, hospital leadership explained that its decision to comply with...
PUBLIC HEALTH・3 DAYS AGO

BOSTON (CBS) — Massachusetts hospitals are once again being ordered to reduce elective procedures by the Baker Administration as the health care system is strained by workforce shortages amid the coronavirus pandemic. “Effective November 29, 2021, any hospital or hospital system that has limited capacity must begin to reduce non-essential, non-urgent scheduled procedures to ensure adequate hospital capacity for immediate healthcare needs,” the administration said in a statement. The Department of Public Health defines these electives “as procedures that are scheduled in advance because the procedure is not a medical emergency and where delay will not result in adverse outcomes to the...
MASSACHUSETTS STATE・4 DAYS AGO
bigbendsentinel.com

Wondering who can get a COVID-19 vaccine booster shot and when? Here’s what Texans need to know.

TEXAS — It’s been more than 10 months since the first COVID-19 vaccines became available in the United States. As of late November, more than half of all Texans have been fully vaccinated against the virus and, despite two spikes in cases and hospitalizations this year — the first during the winter months and the second triggered by the highly contagious delta variant during the summer — the vaccination effort has been pivotal in mitigating the pandemic.
TEXAS STATE・4 DAYS AGO
WTOP

Private-sector employees in the District now have to be offered two hours of paid leave to get a COVID-19 shot — both for themselves and for their children. An emergency law signed by D.C. Mayor Muriel Bowser last week also requires up to eight hours of paid leave for recovery time.
LAW・4 DAYS AGO
localsyr.com

SYRACUSE, N.Y. (WSYR-TV) — Crouse Hospital has terminated 45 employees for refusing to comply with New York State’s COVID-19 vaccine mandate after losing their religious exemptions, according to a spokesperson. Monday was the deadline for health care workers who were granted religious exemptions in New York to get the COVID...
SYRACUSE, NY・5 DAYS AGO

More than 90% of federal employees will have had at least one COVID-19 vaccine dose by the end of Monday, the deadline for the largest workforce in the country to get vaccinated under a mandate imposed by President Biden in September. The vast majority of the 3.5 million employees covered...
PUBLIC HEALTH・5 DAYS AGO
Daily Mail

Sajid Javid has ordered an urgent review to look at racial bias within medical equipment after a study found oxygen level readers used in hospitals are less accurate on people with darker skin. The Health Secretary, 51, plans to work alongside American counterparts within Joe Biden's administration to deliver new...
PUBLIC HEALTH・7 DAYS AGO
WGNO

Nurse tells why she’s refusing COVID shot, not letting her kids get it either

A registered nurse, who despite having seen the ravages of COVID-19 first hand, will not get the vaccine.
SOCCER・8 DAYS AGO
WGAU

FITCHBURG, Mass. — A CVS pharmacy technician who was supposed to give a 4-year-old boy a flu shot mistakenly gave him a dose of the pediatric COVID-19 vaccine instead, WFXT reported. Meghan Cameron told WFXT that she took her son, Jack, to get a flu shot at a CVS in...
FITCHBURG, MA・8 DAYS AGO
FingerLakes1.com

Health systems across the region will have to get employees vaccinated immediately, or face consequences of the state’s vaccine mandate. After weeks of uncertainty around the September mandate requiring all healthcare workers at large healthcare systems to get the COVID-19 vaccine or face termination – the state has issued guidance to those systems.
ROCHESTER, NY・10 DAYS AGO
deseret.com

Do fully vaccinated people get hospitalized with COVID?. Fauci, the White House medical adviser on the coronavirus, said there’s been a rise in hospitalizations among fully vaccinated people as of late, as those people have not gotten their booster shots, according to NBC News. “What we’re starting to see now...
PUBLIC HEALTH・9 DAYS AGO
Daily Mail

The nation's top infectious disease expert says that COVID-19 hospitalizations are rising among people fully vaccinated who have not had booster shots. Dr Anthony Fauci, the director of the National Institute for Allergy and Infectious Diseases, said waning immunity from the initial shots is leading to a rise in severe cases among immunized Americans.
PUBLIC HEALTH・9 DAYS AGO
Lovely County Citizen

Unless they have a religious or medical exemption, Eureka Springs Hospital employees are required to be fully vaccinated against COVID-19 by Jan. 4. At the Eureka Springs Hospital Commission’s regular meeting Monday night, hospital CEO Angie Shaw announced a Nov. 5 ruling by the Centers for Medicare & Medicaid Services that requires employees at all healthcare facilities participating in Medicare or Medicaid to receive at least one dose of the COVID-19 vaccine by Dec. 6. The employees must be fully vaccinated by Jan. 4, Shaw said.
EUREKA SPRINGS, AR・9 DAYS AGO