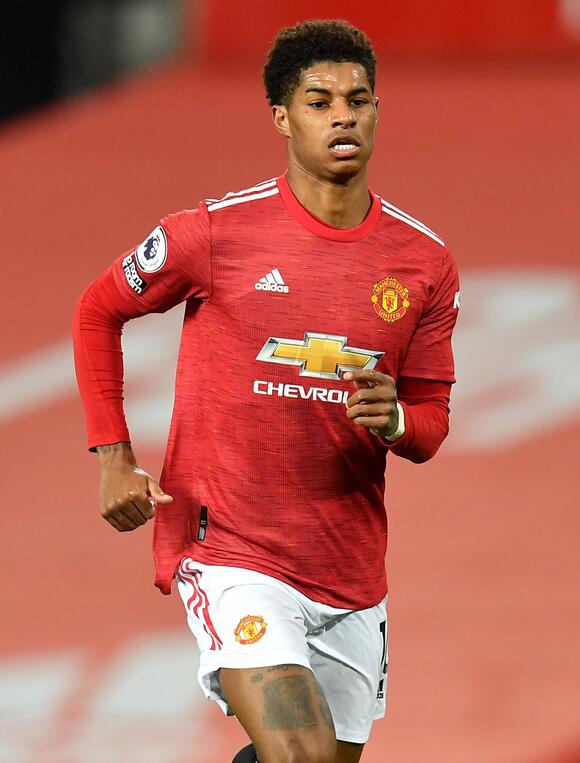 The 24-year-old forward could make his first appearance of the season in Saturday’s Premier League game at Leicester after recovering from shoulder surgery.

Rashford, who went under the knife in August following England’s penalty shoot-out defeat by Italy in the Euro 2020 final, will be included in United’s squad.

Solskjaer said: “I know we’ll see the best of Marcus in the years to come.

“He’s done remarkable things at a young age and he’s now coming into his best age for a footballer.

“He’s learning. He’s getting more and more experience. He’s had time to reflect on what he’s done off the pitch as well, because he’s done some fantastic things, and now maybe prioritise his football and focus on football.”

Rashford, who became an MBE in the Queen’s Birthday Honours list in 2020 for his free school meals campaign, was dogged by the injury during the latter part of last season.

It affected his movement and training, but he still made 57 appearances in all competitions for United, scoring 21 goals and making 15 assists. 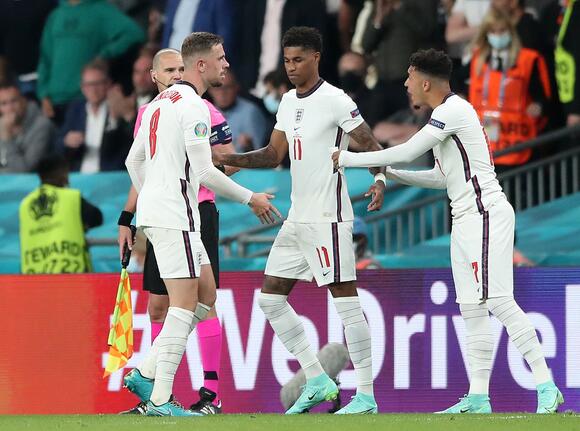 “He’s got a challenge on his hands here at Man United and a challenge to play for England and I think Marcus is one of those who takes up those challenges,” Solskjaer said.

“He’s going to express himself and his talent and he knows we want a lot from him, but also we’ll give him the time to get back to what he was and what he can be.”

Rashford, who scored twice on his United debut as an 18-year-old against Midtjylland in the Europa League in 2016, will embark on his seventh Premier League season.

“He does look fresh,” Solskjaer said. “He looks keen, he looks fit. He’s bulked up a little bit, some muscle.

“Of course, he had to bear a lot of responsibility for us because we had injuries and different players out and at such a young age he’s done so much for the team.

“He’s done so much off the pitch as well and I think that time away for him was time for him to focus on himself.”

Since Rashford’s last appearance for United – in their Europa League final penalty shoot-out defeat to Villarreal in May – Cristiano Ronaldo, Jadon Sancho and Raphael Varane have been added to the squad.

“For us now, he comes back into a different team,” Solskjaer added. “He’s got Jadon here, Mason (Greenwood) has grown, Cristiano is here.

“I want to see that nice smile and enthusiasm he’s shown so many times and if he comes on, if he starts, just enjoy yourself and express yourself.

“That’s what Man United players do and that’s what we want.”

Ole Gunnar Solskjaer has urged his Manchester United players to respond positively to the pressure they are facing as questions on his own future at Old Trafford continue. The international break has seen several reports suggest it is a question of when, not if, Solskjaer is replaced after a run of four Premier League defeats in six – including chastening home losses to Liverpool and Manchester City.
PREMIER LEAGUE・13 DAYS AGO
Telegraph

At the conclusion of their side’s spirited, deserved and comprehensive victory over Manchester United at Vicarage Road, the Watford fans were gleefully chanting: “Ole’s at the wheel.” No wonder. If Ole Gunnar Solskjaer were in charge of all the clubs they have to play this season relegation would be not remotely an issue. Frankly they would be flying. Europe here they come.
PREMIER LEAGUE・12 DAYS AGO
SB Nation

Report: Ole Gunnar Solskjaer to be sacked by Manchester United

Per multiple reports, the Manchester United board of directors have decided to sack Ole Gunnar Solskjaer. An official announcement is expected in the coming hours, and the search will begin once again for a new manager on a permanent basis. It is rumored that Darren Fletcher or Michael Carrick could...
PREMIER LEAGUE・11 DAYS AGO
The Independent

When Cristiano Ronaldo and Bruno Fernandes were away with Portugal last week, the two naturally discussed Manchester United at length. Both liked Ole Gunnar Solskjaer but neither felt he was up to it. That feeling had spread around the entire dressing room.Outgoing executive vice-chairman Ed Woodward was well aware of this. It was why there was greater pressure on Solskjaer going into the Watford game, and a sense of unease.Still, nobody expected it to get as bad as that at Vicarage Road. Then again, that has been the story of the modern Manchester United, and particularly Solskjaer’s time. They...
PREMIER LEAGUE・11 DAYS AGO

Under-fire Manchester United boss Ole Gunnar Solskjaer believes that he is still the man to lead the club and is confident he can arrest their current form. United were thrashed 4-1 by Watford on Saturday after yet another embarrassing performance. Goals from Josh King and Ismaila Sarr saw the hosts race into a two-goal lead, before substitute Donny van de Beek - who has barely played under Solskjaer - pulled one back.
PREMIER LEAGUE・12 DAYS AGO
ESPN

Ole Gunnar Solskjaer on Man United exit: It was time to step aside

Ole Gunnar Solskjaer has said it was time to "step aside" after Manchester United announced his departure as manager. Solskjaer lost his job as manager on Sunday following Saturday's 4-1 defeat at Watford. Manchester United are on a run of five defeats in seven league matches and are six points off the qualification places for the Champions League.
PREMIER LEAGUE・11 DAYS AGO
SPORTbible

Ole Gunnar Solskjaer's departure from Manchester United was confirmed on Sunday morning, and further details are emerging regarding the details of his ill-fated tenure in charge. The Manchester Evening News reports that a list of platitudes was hung on the wall of Solskjaer's office, with the pick of these being:...
PREMIER LEAGUE・11 DAYS AGO
punditarena.com

His former teammate has weighed in. Gary Neville has not taken long to respond to Ole Gunnar Solskjaer’s sacking. The former Manchester United captain took to Twitter to pay tribute to Solskjaer, who was fired as United manager on Sunday morning. Alongside some pictures of the two playing together, Neville...
PREMIER LEAGUE・11 DAYS AGO

Manchester United caretaker boss Michael Carrick has dedicated his side's win at Villarreal on Tuesday night to predecessor Ole Gunnar Solskjaer. The Norwegian was given his marching orders on Sunday after a terrible run of results, with Carrick being placed in temporary charge ahead of their crucial Champions League tie.
PREMIER LEAGUE・8 DAYS AGO
punditarena.com

“There’s no point saying too much about it…”. Ole Gunnar Solskjaer felt the need to apologise for smiling in his post-match interview, after Manchester United lost 4-1 to Watford on Saturday. United lost the game, and will be somewhat relieved that it was only 4-1, as David de Gea saved...
PREMIER LEAGUE・12 DAYS AGO
punditarena.com

Ole Gunnar Solskjaer reveals what’s next for him

Ole Gunnar Solskjaer took part in a farewell interview with Manchester United, after the club sacked him on Sunday morning. Solskjaer was let go after a terrible month in charge of the club, leaving them 12 points off top spot in a season where many felt they could challenge for the league.
SOCCER・10 DAYS AGO
San Diego Union-Tribune

Ralf Rangnick has been granted a work permit to start his interim tenure as Manchester United manager
SAN DIEGO, CA・7 HOURS AGO

Follow all the action as Manchester United face Arsenal in the Premier League this evening. Ralf Rangnick’s work permit was granted on Thursday morning, meaning this will be the last game of Michael Carrick’s tenure as caretaker manager. His brief stint in charge can be considered a success so far, though, with United defeating Villarreal in a crucial Champions League tie before holding leaders Chelsea to a 0-0 draw at Stamford Bridge. However, the club are still languishing in tenth in the table and need a significant and sustained upturn in results in order to resurrect their hopes of...
PREMIER LEAGUE・1 HOUR AGO
Insider

"It is unacceptable that the person responsible for awarding such a prestigious prize could lie in this way," Ronaldo said.
SOCCER・2 DAYS AGO
SPORTbible

Lionel Messi emphatically denied a request from a director involving his wife ahead of winning his seventh Ballon d'Or on Monday night. Messi beat Robert Lewandowski, Jorginho and Karim Benzema to the prize, which was presented to him by former teammate and close friend Luis Suarez. Before the ceremony got...
SOCCER・2 DAYS AGO
The Independent

When Thomas Tuchel comes in after games and scans the other results, he doesn’t automatically go to Liverpool or Manchester City. At least not yet.“There are some teams behind us who show consistency, who show quality, who show determination,” the Chelsea manager said last week. “This is what it is. You have a right to be proud of your competition here, in the Premier League, and for us it feels good because we are in the middle of that race and we want to stay here. I don’t know if it will settle down.”There is a bit of a...
PREMIER LEAGUE・1 DAY AGO
ESPN

Count the Ballon d'Or as one of those grand old institutions that's insanely popular. There are several reasons for it, too. There's history: The Ballon d'Or dates back to 1956, which means it predates the European Championships, yellow and red cards, substitutions, color TV, remote controls and of course, FIFA (the video game). There's the fact that top players really, really care about winning it: Clubs mount campaigns on behalf of their star players, guys like Cristiano Ronaldo (despite already having five of these at home) get annoyed when it gets canceled (like it did last year due to the coronavirus pandemic), while Bayern Munich striker Robert Lewandowski's face lit up like a child hearing reindeer footsteps on the roof when he found out he was among the favorites.
MLS・2 DAYS AGO
punditarena.com

One of the most important signings Man United have made in a long time. On Cristiano Ronaldo’s second debut for Manchester United, the legendary footballer returned to Old Trafford in the best possible way. He scored two goals against Newcastle, and he lifted the entire crowd. The team looked buzzing...
PREMIER LEAGUE・11 DAYS AGO
The Guardian

Minute-by-minute report: Will Tottenham get the better of Brentford? Join Paul Doyle to find out
PREMIER LEAGUE・12 MINUTES AGO
The Independent

John Sillett, fondly known as ‘Snoz’ throughout the world of football because of his large nose, will forever be remembered for leading Coventry to FA Cup glory in 1987.The nickname suited the larger than life Sillett as he certainly had a nose for drama during a career that began at Chelsea and reached its zenith when the unfancied Sky Blues won the cup by beating Tottenham 3-2 in thrilling fashion at Wembley.It remains the only major honour in Coventry’s 138-year history.Sillett, who has died at the age of 85, said his great pal and former Chelsea team-mate Jimmy Greaves coined...
PREMIER LEAGUE・2 DAYS AGO