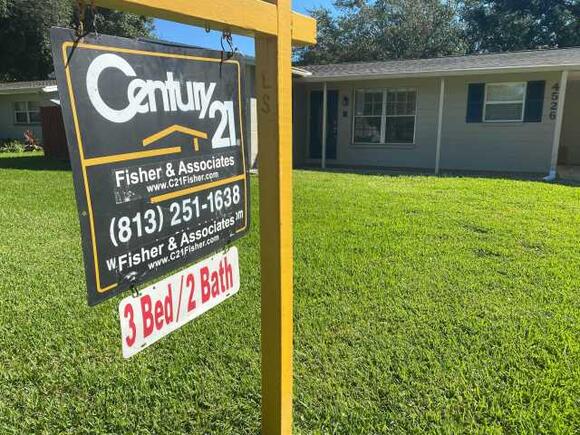 Incredibly challenging. That’s how some potential homebuyers are describing the hunt for real estate.

Tampa Bay is in the midst of a hot seller’s market, which means it’s great for anyone looking to sell their home but complicated for those looking to buy.

Robin and Ramon Herrera aren’t too picky. They recently relocated from Connecticut and have been renting a home in Tampa Bay. Now, the couple would like to purchase a home. They are hoping to find some land, a few extra rooms, closet space, and maybe a pool.

Yet, finding their little slice of paradise is proving to be a challenge.

“We see one we like that comes on the market one hour and the next hour it can be gone,” explained Ramon as he and his wife toured a home Friday in South Tampa.

“I’m not the only one who will tell you that. A lot of my colleagues still sit here and say you know it’s not for the faint of heart because you have to be on your A-game,” Willis explained.

Willis says homes are staying on the market just 21 days, according to Stellar MLS via Broker Metrics. That’s down 60% from a year ago, and Tampa Bay’s inventory is less than half of the already low national average.

“You’re looking at a home and 10 minutes later there are offers and multiple offers on it. Truly I have been at a home, called the real estate agent and said I’ll submit and offer, and she said don’t worry I’ve already got 5 really good offers on it,” Willis added.

On the flip side, Willis says homes he is selling will often get 10-12 offers within the first 24 hours.

Cash sales are also up significantly, as much as 123% in Hillsborough County over the past year.

“They’re paying cash on hand and how can you compete with that?” Ramon Herrera questioned.

Some sellers are even asking buyers to waive inspections or pay the difference if a house appraises lower than it is listed for.

However, there are good signs. Inventory is slowly ticking up across Tampa Bay, which is helping to cool down the sizzling seller’s market. Interest rates also remain mostly competitive.

Willis suggests if you see a house you like to act immediately, and if you can expand your location radius, that’s helpful too.

Robin Herrera can’t wait to find a home of their own. “I would love to find something and just have my own home. It’s nice to rent but your own home, you put your mark on it.”

In this overheated housing market, buyers could lose out on their dream home to an out-of-town investor, so how is it possible to compete and get the house you want?. Brandon Haefele, the president and CEO of Catalyst Mortgage, joined Mae to break down the challenges and offer some strategies for buyers.
REAL ESTATE・1 DAY AGO
Cleveland.com

A lot more of the dynamics seen in 2021 — but at a much less frenzied pace — is expected to be on tap for next year’s housing market. Redfin Corp. (NASDAQ: RDFN), Zillow Group Inc. (NASDAQ: ZG), Realtor.com and the National Association of Realtors, among others, have released their forecasts for the 2022 U.S. housing market, with similar themes, although some variations, among each source.
REAL ESTATE・1 DAY AGO
GOBankingRates

If you've thought about buying a second home as a vacation property, now may be a good time to do so. According to a recent report by Redfin, second-home buyer demand is slowing down, which will open...
REAL ESTATE・1 DAY AGO
wmar2news

We've all heard "seller's market" and "buyer's market", but what does it mean if you're currently looking to sell or buy a home? Our RE/MAX Ikon broker is here with our real estate rundown. Currently real estate is experiencing a seller's market, which means there is a limited inventory of...
REAL ESTATE・16 HOURS AGO

Price growth slowed a skosh and inventory ticked up slightly across the nation’s biggest metros in the third quarter. And while many potential first-time buyers have found their savings bolstered…
REAL ESTATE・23 HOURS AGO
franklinis.com

From Ho-Hum House To Hot Home: How to Keep Up In A Sizzling Real Estate Market

From Ho-Hum House To Hot Home: How to Keep Up In A Sizzling Real Estate Market. It has been a record year for home sellers. The migration to Tennessee from northern and coastal cities was documented by the Wall Street Journal and New York Times, among other national publications, making Franklin one of the hottest real estate markets in the country. And who can blame them? Those who showed up hoping to score bargain-basement properties experienced sticker shock. According to Redfin, the listing price for a typical four-bedroom is $262 per square foot, a 28.9% increase in one year. A house with 4,000 square feet or more could run a million dollars, up 45% from a few years ago, and multiple offers are customary.
FRANKLIN, TN・14 HOURS AGO
money.com

After increasing for 14 straight months, home price growth finally slowed in September. The latest CoreLogic Case-Shiller Home Price Index released Tuesday shows home prices increased 19.5% between September 2020 and September 2021. That's down from a record 19.8% year-over-year increase in August. To be sure, even as there are...
BUSINESS・1 DAY AGO
The Motley Fool

Raising the Rent -- and the Ceiling -- on Industrial Real Estate

The shift from "just in time" to "just in case" is underway.
REAL ESTATE・22 HOURS AGO

The Federal Reserve says that Generation X currently holds 41.5% of home mortgages in the second quarter of 2021, followed by baby boomers with 27.3% and then millennials with 26.7%. However, a new study from Realtor.com forecasts a generational shift with more … Continue reading → The post Can Millennials Take Over a Tough Housing Market in 2022? appeared first on SmartAsset Blog.
REAL ESTATE・21 HOURS AGO
The Motley Fool

How Risky Is Co-Buying a Home?

Buying a house with a friend or partner can be a great way to save money and build equity but comes with a lot of risks.
REAL ESTATE・1 DAY AGO
dsnews.com

Has released its latest iteration of their Real House Price Index (RHPI) for September which measures the price changes of single-family properties across national, state, and metropolitan areas, which are adjusted based on income, interest rates, and home-buying power. The ultimate goal of this is to provide a clearer picture of housing affordability.
REAL ESTATE・1 DAY AGO
GOBankingRates

To say the 2021 real estate market was competitive might be the understatement of the year -- at least in many areas. White hot buyer demand from 2020 carried over into the new year, creating...
HOUSING・2 DAYS AGO

Home Sellers: If You’re Only Going to Stage One Room, Make It This One

It’s no secret we’re in a seller’s market. And with homes flying off the market and many selling above list price, you might be tempted to put your house up for sale without upgrading your home’s décor. After all, why bother when so many buyers are already clamoring for a low supply of homes?
HOME & GARDEN・2 DAYS AGO
ABC Action News WFTS

A hot market and retirees price people out of Sarasota

"I think it would be more appropriate to say what's the blame, rather than who's to blame, and it's the market that is to blame."
SARASOTA COUNTY, FL・2 DAYS AGO
probuilder.com

Median home prices reached an all-time high of $359,975 at the end of a four-week period ending on November 21, a 14% year-over-year increase driven by limited supply and rising inflation. Higher home prices benefit sellers and suggest quick turnover with available homes lasting an average of 24 days on the market and 32% of homes under contract accepting an offer after just one week, according to Forbes.
BUSINESS・3 DAYS AGO
GOBankingRates

No doubt about it -- the real estate market has been white hot in 2021. But if you didn't make a move this year, and you're thinking about buying or selling -- or both -- next year, you'll want to...
REAL ESTATE・4 DAYS AGO
magazine.realtor

In some of the nation’s hottest housing markets, housing prices climbed by more than 30% this year. While prices are continuing to rise across the country, there are signs that steep price jumps are moderating. The median home list price has held steady over the past four months at around...
REAL ESTATE・3 DAYS AGO
mynews13.com

CINCINNATI — Listing a home is a big task, and getting it ready to list for top dollar can be stressful. That’s why two Cincinnatians decided to create a company to make it easier. And now, their business is booming and expanding across Ohio thanks to the hot real estate market.
CINCINNATI, OH・5 DAYS AGO
Rogersville Review

Pending home sales dipped in October as monthly accepted contract activity declined while the year-over-year comparison continued increasing. Pending sales are a leading indicator of housing activity based on signed contracts for existing single-family homes and condominiums sales in the region monitored by the Northeast Tennessee Association of Realtors (NETAR) Home Sales Report. Since resales go under contract 30 to 60 days before the sale closes, pending sales offer some insight about the direction existing home sales closing will take.
REAL ESTATE・5 DAYS AGO
Entrepreneur

Keep these nine things in mind to maximize your chances of success.
REAL ESTATE・6 DAYS AGO