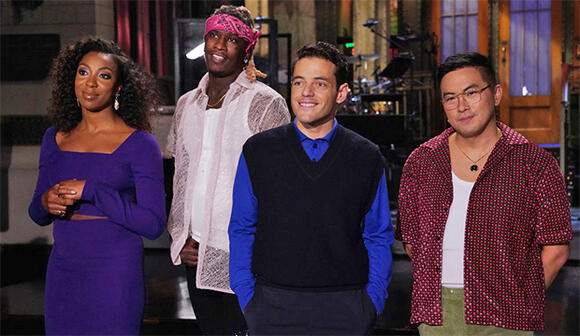 This weekend marks the first time Rami Malek is hosting “ Saturday Night Live ,” but it turns out he’s not being welcomed with open arms by the regular cast members. “You know Rami, a lot of people find your eyes unnerving, but I don’t see it,” Ego Nwodim jokingly tells him in the latest “SNL” preview video ( watch above ). When Bowen Yang challenges them to a staring contest, Nwodim takes one look into Malek’s peepers and declares matter-of-factly, “This man is a demon.” The episode airs Saturday, October 16 on NBC .

In another clip, Yang declares that he is actually hip-hop star Young Thug . “That’s me!” Yang shouts when Malek announces the week’s musical guest. Young Thug then plays along, saying he’s happy to meet Yang because he’s the “greatest rapper of all time.” This episode marks Young Thug’s first appearance on the “SNL” stage.

The video concludes with Nwodim and Yang confusing Malek’s latest film “No Time to Die” with box office bomb “Cats.” “That was good,” Yang states. “I mean, when Grizabella goes back to the Jellicle Ball and sings that song? Oh my God. Tears.” Demon-eyed Malek kindly tries to correct them, but Nwodim remains confident they’re referring to “the new Bond movie.”

Malek is on a hot streak with awards shows, winning the Best Actor Oscar for “Bohemian Rhapsody” (2018) and the Best Drama Actor Emmy for “Mr. Robot” (2016). He plays Lyutsifer Safin in “No Time to Die,” the current foe of James Bond ( Daniel Craig ). The film is already a box office hit, making its way into the U.S. Top 10 of 2021 after just one week in theaters.

The 47th season of “Saturday Night Live” premiered on October 2 with Owen Wilson hosting. Last weekend, Kim Kardashian West made headlines in her monologue thanks to her jokes about her family and O.J. Simpson . After Malek tackles this week’s outing, Jason Sudeikis is set to return to the “SNL” stage to oversee the October 23 episode.

Who watches that crap? Used to be hilarious until they went hard left partisan. I'll bet I haven't watched two hours in the last five years and most of that would have been Adam Sandler's show. The rest of it is untalented and not very funny.

The Newcomers of ‘Saturday Night Live’

“Saturday Night Live” (“SNL”) is one of the most beloved late-night institutions of New York City. Since 1975, the show has given us American political satire, ridiculously funny sketches, a lobster in a diner musical and some of Hollywood’s biggest comedians. Cast members have come on the show as unknown...
NEW YORK CITY, NY・6 DAYS AGO
Newsweek

'A Saturday Night Live Thanksgiving': How to Watch the 'SNL' Holiday Special Tonight

"Saturday Night Live" are back with a two-hour holiday special that is sure to have keep viewers entertained in the lead-up to Thanksgiving.
TV SHOWS・13 DAYS AGO
enstarz.com

Pete Davidson Getting Banned From 'SNL' Because of Kim Kardashian? Other Cast Members Are Not Happy Because of THIS

Is Pete Davidson on the verge of being fired or banned from "Saturday Night Live"?. His castmates said he has a lot of air in his head after being associated to Kim Kardashian, who is one of the most well-known people on the planet. Pete, who is claimed to be...
CELEBRITIES・14 DAYS AGO
cartermatt.com

NBC is shaking things up in a big way with their New Year’s Eve programming, and apparently, it involves giving Pete Davidson more air time. Today, the network confirmed that on Friday, December 31, they will air from 10:30 p.m. until 12:30 a.m. a two-hour event from Miami. The Saturday Night Live star technically isn’t given top billing for the special; instead, it’s frequent SNL musical guest Miley Cyrus! Miley’s New Year’s Eve Party Hosted by Miley Cyrus and Pete Davidson will feature a number of other guests and probably a lot of comedy bits; after all, Lorne Michaels is an executive producer on the project.
TV & VIDEOS・8 DAYS AGO

Jimmy Fallon and NBC’s all-star music competition series “That’s My Jam” is set to get a French adaptation that will be produced by TF1 Productions and Universal Television Alternative Studio. NBCUniversal Formats is handling international licensing on the show, which will mark the first international adaptation of “That’s My Jam.” Production is set to start next year. “That’s My Jam” is inspired by the wildly popular musical segments on NBC’s “The Tonight Show,” such as “Wheel of Musical Impressions,” “Musical Genre Challenge,” and “Slay It Don’t Spray It.” The French version will see celebrity guests team up and face off in musical...
MUSIC・16 HOURS AGO
NME

Steve Martin has jokingly offered his acting services to Joe Biden on Saturday Night Live. The actor recently met the US president at the Kennedy Center Honors, where SNL boss Lorne Michaels was honoured for his career. Biden poked fun at Michaels calling him “Mr. Wiseguy” and acknowledging how seven...
CELEBRITIES・15 HOURS AGO
The US Sun

KIM Kardashian and Pete Davidson's romance may be fresh, but the reality star is 'already talking about kids' with Saturday Night Live star Pete Davidson as estranged husband Kanye West remains 'in denial' about their relationship. Us Weekly reported in its latest print issue that the Keeping Up With the...
RELATIONSHIPS・18 HOURS AGO

First-time nominee Kenan Thompson is getting ready to host the 2021 People's Choice Awards for an in-person audience.
SANTA MONICA, CA・20 HOURS AGO