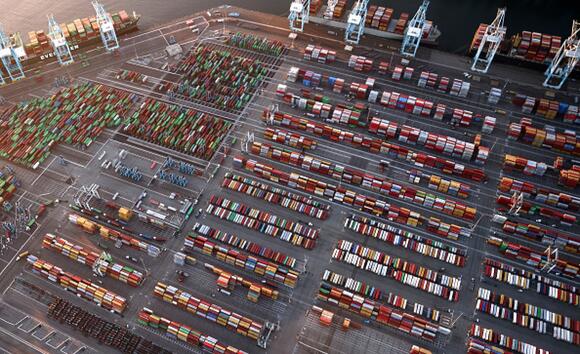 LONG BEACH, California — Crane operators who belong to a powerful union and earn up to $250,000 a year transferring containers from ships to trucks are worsening the supply chain crisis that threatens Christmas by goofing off on the job, frustrated truckers told the Washington Examiner .

The finger-pointing at the busy Los Angeles County ports comes as scores of container ships are anchored off the California coast, waiting in some cases for weeks to unload their freight. The Biden administration has scrambled to get shipping executives, port officials, and labor to tackle the problem. While the reasons for the burgeoning backlog are complex, truck drivers say not everyone seems to be working together.

“In 15 years of doing this job, I’ve never seen them work slower,” said Antonio, who has spent hours waiting at Los Angeles County ports for cargo to be loaded. “The crane operators take their time, like three to four hours to get just one container. You can’t say anything to them, or they will just go [help] someone else.”

The Washington Examiner spoke to six truck drivers near the Long Beach/Terminal Island entry route, and each described crane operators as lazy, prone to long lunches, and quick to retaliate against complaints. The allegations were backed up by a labor consultant who has worked on the waterfront for 40 years. None of the truckers interviewed for this story wanted to provide a last name because they fear reprisals at the ports.

The crane operators are part of the International Longshore and Warehouse Union, which also represents longshoremen. Veteran operators who have a set schedule make $65 an hour and are paid for up to 4,000 hours per year, which include hours they don't actually work - approximately $250,000 a year, according to labor consultant Jim Tessier , who represents longshoremen in disputes against the union.

“What you are talking about is perfectly described behavior,” Tessier said of the crane operators. “This is all a reflection of the management they have down there, the inmates run the asylum. The managers are all afraid to say anything because the operators are so powerful they get management fired if they don’t like them.”

Most truckers are independent contractors who are paid per container delivery and make a fraction of a crane operator's salary. They only arrive at the docks after receiving notification that the cargo is ready for pickup. Waiting hours for shipping containers to be loaded onto their trucks is frustrating, and those who have complained were swiftly dealt with, they say.

“They’ll go get the police and kick you out and tell you to leave,” said trucker Chris. “Then, you get banned from coming back in there.”

Or sometimes, the crane operator will mete out punishment by skipping the trucker and working on someone else, exacerbating the wait.

While three-hour waits are common, some truckers have been at the port for days.

“They will wait there all day and then come back the next day,” Chris said. “I know someone who kept coming back, and eventually, [the terminal] will charge you a storage fee if you don’t get the container out of there.”

Truckers unlucky enough to be waiting around lunchtime will watch as the entire crane crew stops work, instead of staggering their hours.

“They leave for two hours, and you are stuck with no one there,” trucker Brian said.

"The Port of Los Angeles broke two Western Hemisphere cargo volume records – one in May when it processed over 1 million TEUs – representing the ports busiest month in its 114 year history, and the other for moving over 10 million TEUs in a single year.

"In addition to the work taking place at the Port of Los Angeles, the Ports of Long Beach, Oakland, and the Northwest Seaport have also broken records throughout the summer and continue today to move cargo as quickly as the off-port supply chain will allow. As you can imagine, ILWU dockworkers are extremely proud of these accomplishments and their contributions to keeping our economy strong and nation moving forward."

As of Wednesday, 59 ships were at a berth unloading cargo at one of the three Los Angeles ports. Another 88 are anchored off the coast stretching along Orange County and around Catalina Island, according to the Marine Exchange, which coordinates the ship traffic. The wait time to come into port can be weeks, including one ship that has been in a holding pattern miles offshore since Sept. 9.

The backlog, stretching 20 miles along the coast, has forced many large retailers to circumvent the bottleneck and charter their own ships so products can be on shelves before the Christmas shopping season. Reuters reported that incoming cargo is up 30%, which is also part of the problem.

A secondary issue leading to the crunch is a lack of available chassis at the ports to place the cargo containers onto before they're hauled away by the truckers. While the truckers say they are making the same number of trips as previous years, for some reason, chassis are in short supply for those who don't own one, and they wait for returns to come in.

In an effort to clear the logjam, President Joe Biden negotiated a 24-hour port operation . One of Long Beach’s terminals has already been working around the clock. The Port of Los Angeles and the Port of Long Beach account for roughly 40% of all U.S. imports.

But the round-the-clock schedule probably won’t matter much because the crane operators work slower at night, said a trucker identified as Oscar.

“Compared to all the other years, they are definitely [working] slower now. I wait at least three hours every single day,” he said. Oscar makes two trips to the ports a day to pick up shipping containers full of electronics, which are dropped off in the greater Los Angeles area — a 10-hour process.

Oscar said each terminal has two massive cranes to load cargo and he’s never seen both of them operating at once. A survey of two dozen cranes in Long Beach by the Washington Examiner found at least half of them nonoperational.

However, one terminal in Long Beach has started using automated cranes, and truckers rejoice when they are summoned to pick up cargo there. It is efficient and quick.

“They have to hire extra men to work the cranes and don’t want to do it,” Tessier said. “There are a lot of things [terminal operators] could do but don’t do because it costs extra money. Shows how concerned they are about their customers.”

I’ll bet some people from the Army Corp of Engineers could operate those cranes with a day or two of training. If this is an example of “ good union paying jobs” Biden needs to rethink his whole plan to unionize most of the work force.

this is old news - they make more on OT. in high school, back in the 80s, friends who relatives were longshoremen working at the San Pedro Port talked about getting jobs after high school and making more money than doctors or lawyers.

Let's see.... what stellar Biden Appointee would this all fall under.... oh, that would be Department of Trancpertation, Pete Butigeig..... oh, she's of secret maternity leave with his husband Chasten adopted two children but aren't done with process... still trying to conceive.

More than 100 firefighters from the Los Angeles Fire Department were suspended without pay over their refusal to comply with the city's COVID-19 vaccine mandate.
LOS ANGELES, CA・1 DAY AGO
WashingtonExaminer

California clinics and politicians unveiled a plan for the state to become a "sanctuary" for those seeking abortions.
CALIFORNIA STATE・11 HOURS AGO
WashingtonExaminer

Fears about the new omicron variant have delivered a boost to vaccination rates since the Thanksgiving holiday.
SCIENCE・16 HOURS AGO

New York City will soon roll out a vaccine mandate for all private sector employees, despite the series of legal setbacks that have befallen President Joe Biden’s attempt to do the same thing on the federal level.
NEW YORK CITY, NY・22 HOURS AGO
WashingtonExaminer

Phoenix backs off from vaccine mandate after federal ruling

Arizona’s capital city has hit the brakes on a planned vaccination mandate for city workers in January.
PHOENIX, AZ・18 HOURS AGO
WashingtonExaminer

Tacoma Narrows Bridge could be paid off early by the legislature

New legislation proposed in Washington state would pay off the Tacoma Narrows Bridge and bring an end to the tolls paid by drivers to use it.
WASHINGTON STATE・16 HOURS AGO
WashingtonExaminer

A historically high number of people quit their jobs in October, according to data released by the Department of Labor on Wednesday.
ECONOMY・19 HOURS AGO
WashingtonExaminer

A boat with a "Let's go Brandon" theme had its holiday boat parade award taken away on Saturday due to its political messaging, which poked fun at President Joe Biden.
BOATS & WATERCRAFTS・7 HOURS AGO
WashingtonExaminer

UK and Australia join US in diplomatic boycott of Beijing Olympics

The United Kingdom and Australia have joined the United States in boycotting the 2022 Chinese-hosted Olympics.
SPORTS・19 HOURS AGO
WashingtonExaminer

US military preparing for potential conflict with China over Taiwan

Pentagon strategists are preparing for a potential confrontation with China over the fate of Taiwan, senior administration officials told lawmakers.
FOREIGN POLICY・11 HOURS AGO

The Kellogg Company announced on Tuesday it will replace approximately 1,400 employees two months after they began a work strike.
BUSINESS・17 HOURS AGO
WashingtonExaminer

Getting your booster may help you defend against COVID-19's omicron variant.
MEDICAL & BIOTECH・20 HOURS AGO
WashingtonExaminer

The American Tort Reform Association has ranked Louisiana the sixth-worst civil court jurisdiction in the country, making the state a top “judicial hellhole” for another year.
LOUISIANA STATE・12 HOURS AGO
WashingtonExaminer

It's "not your average desk job."
WASHINGTON, DC・13 HOURS AGO

Biden orders federal government to be carbon neutral by 2050

Employees at a Seattle-area hospital have received a refund of thousands of dollars in union dues after a ruling from the National Labor Relations Board (NLRB) found that the money was collected improperly.
SEATTLE, WA・14 HOURS AGO
WashingtonExaminer

The city of Baltimore is willing to offer fully vaccinated city employees $1,000, according to city officials.
BALTIMORE, MD・15 HOURS AGO
WashingtonExaminer

Iranian President Ebrahim Raisi faces a “last chance” to negotiate a return to the 2015 nuclear deal following an abortive meeting last week that has all but convinced U.S. and European officials that the regime has no sincere intention to rehabilitate the pact.
WORLD・8 HOURS AGO