‘THIS IS HOME’: Watch Zach Ertz’s Emotional Goodbye To Philadelphia After Being Traded To Cardinals 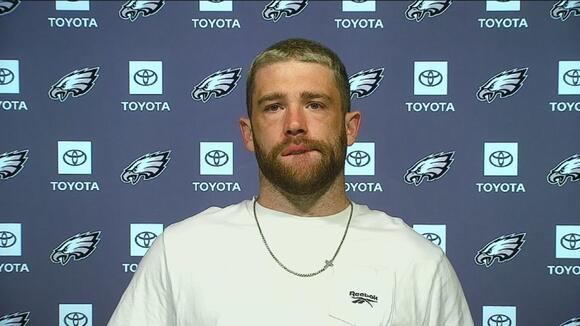 PHILADELPHIA (CBS) — A career in Philadelphia has ended for an all-time Eagles great. It’s been an emotional week for Zach Ertz, who juggled the emotions of knowing a trade was coming and playing his final game at Lincoln Financial Field Thursday night.

As people in Ertz’s life started to find out he was leaving Philadelphia, there was one thing they didn’t understand, and it kind of “irked” him. While his wife Julie Ertz is originally from Arizona, and it’s closer to California where he grew up, they no longer call those states home.

“This is home. Philadelphia is home,” Ertz said. “And that was tough to articulate to people, that I love this place, I’ve said it all along. It’s a great opportunity to be here and I loved it here. I did the best I could every day and I can leave knowing that and this isn’t going to be the last you’re going to see of me in this city.”

Ertz got emotional as he talked about his love for the City of Brotherly Love after being traded to the Arizona Cardinals on Friday , and rightfully so.

He’s spent his whole career in this city. He and Julie grew roots here.

He didn’t want to leave the organization that drafted him with the 35th overall pick in the 2013 NFL Draft, making his final game in midnight green at Lincoln Financial Field extremely emotional.

“I was crying at my locker last night for 30 minutes and I felt bad because the guys didn’t really know, but I couldn’t help it,” Ertz said.

Last season he wanted a contract extension, and when an agreement wasn’t reached, there was speculation the Birds’ final game against Washington would be his final appearance at the Linc.

Being able to come back this season and end his career with the Eagles at Lincoln Financial Field in front of a stadium full of die-hard fans was priceless.

“It was special,” Ertz said. “Last January against Washington, there were no fans so it was weird and I’m glad I didn’t end it like that last January and it was special last night. Obviously, we didn’t win, which sucked, but it was fun. It was fun to do what I do out there and I felt like I played great and was myself.”

There are two types of athletes that come into the City of Philadelphia. The ones who can acknowledge the passion that Philadelphia fans have when it comes to watching their teams succeed and the ones who can’t handle the brutal honesty and criticism they might face in here.

“That’s what I loved about this place. People were honest. They’re blunt,” Ertz said.

Ertz embraced this city and the passionate fans. He didn’t get offended by criticism because he knew he was working hard in order to help the Eagles win. This is all he feels the city wants — to see their team win games.

“Standards are so high for a reason, the fans care so much,” Ertz said. “It’s tough for some people, but I loved it and that was the bottom line, I loved playing here. I didn’t care if I got booed, got bad things said on a Monday after a terrible game on Sunday because I knew I was going to be in here on Monday.”

Ertz leaves behind a legacy Eagles fans will never forget.

He is second in the franchise’s catch total behind Harold Carmichael with 579 receptions — just 11 away from surpassing Carmichael.

“Who knows maybe I’ll come back and get 12 more catches and Harold can be No. 2, but I’ll let him have it for a few more years, maybe forever but it’s been fun,” Ertz said.

Ertz also recorded 6,267 yards and 38 touchdowns with the Birds.

In 2018 he set a franchise and an NFL record for tight ends with 116 receptions. Ertz ended that season with 1,163 yards and eight touchdowns. He also caught the game-winning touchdown in Super Bowl 52.

Cardinals' Ertz giving back to his new community

PHOENIX — If Kyler Murray returns Sunday in Seattle, that's a big boost for the Cardinals' high-scoring offense. The more points they score, the more hungry mouths they feed across Arizona thanks to the newest Cardinal, Zach Ertz, and his Ertz Family Foundation. Zach, his wife Julie, and The Athletes'...
NFL・11 DAYS AGO
FanSided

As the time runs out on the NFL’s 11th week of action, the Philadelphia Eagles have a few more hours to celebrate their first winning streak of the season before the focus shifts to the hated New York Giants for the first of their annual two-game series with Big Blue.
NFL・9 DAYS AGO
Yardbarker

It was the perfect setting for tight end Zach Ertz to have his best game as a Cardinal in a critical situation. Coming off what could have been a dispiriting 34-10 home loss to the Carolina Panthers, the Cardinals traveled to Seattle with a 5-0 road record to play a team that Ertz had never beaten during his career with the Eagles.
NFL・9 DAYS AGO
fantasypros.com

Some of the NFL’s brightest stars came to play in Week 11. Jonathan Taylor (RB – IND), Austin Ekeler (RB – LAC), Justin Jefferson (WR – MIN), and Justin Herbert (QB – LAC), to name a few, had amazing fantasy weeks. The stars, however, weren’t the only players who stood out. We’ll dig into the players whose performances this past week interest us the most and analyze their prospects moving forward on a scale of 🔥-to-🔥🔥🔥🔥🔥 along with their stats (half-point PPR scoring) and positional rank for the week.
NFL・7 DAYS AGO

SEATTLE — With Kyler Murray sidelined for a third week in a row, the Arizona Cardinals used lockdown defense to defeat the Seattle Seahawks 23-13 on Sunday. Bouncing back from a rough game last week, backup QB Colt McCoy led an 82-yard drive that was aided by a pass interference call on Seattle to set up an easy 1-yard score to Zach Ertz.
NFL・9 DAYS AGO
Arizona Cardinals

The Cardinals were fresh off a poor performance last week at State Farm Stadium and already without quarterback Kyler Murray and wideout DeAndre Hopkins for the third consecutive game Sunday. Tight end Zach Ertz understood the assignment of being underdogs at Lumen Field, one of the loudest stadiums in the...
NFL・9 DAYS AGO
NBC Sports

The Cardinals don’t have quarterback Kyler Murry or receiver DeAndre Hopkins. But they do have tight end Zach Ertz for backup quarterback Colt McCoy. And Ertz got in the end zone for a 1-yard touchdown to cap Arizona’s 16-play, 82-yard opening drive for a 7-0 lead. McCoy completed 7-of-8 passes...
NFL・9 DAYS AGO
Yakima Herald Republic

Seahawks' Jamal Adams, D.J. Reed to be game-time decisions vs. Cardinals after being injured in practice

Nov. 20—RENTON — Half of the Seahawks' starting secondary — safety Jamal Adams and right cornerback D.J. Reed — is listed as questionable and considered a game-time decision for Sunday's home game against Arizona. Coach Pete Carroll said both players suffered injuries in practice this week and sat out Friday...
NFL・10 DAYS AGO

The NFL injury report is always filled with some of the game’s best stars, leaving fans and fantasy football managers
NFL・16 HOURS AGO
Sportsnaut

Minnesota Vikings schedule: Taking their frustration out on the Lions

Check out odds, plays and more for the Arizona Cardinals vs. Chicago Bears NFL Week 13 matchup on December 5, 2021.
NFL・3 HOURS AGO
Sportsnaut

Check-in here throughout the year for the NFL games today full weekly schedule. Including links to Sportsnaut’s season forecasts for
NFL・17 HOURS AGO

San Francisco 49ers schedule: Looking to keep it going in the Pacific Northwest

Los Angeles Rams schedule: Getting it right against the Jaguars

The Colts traded for Carson Wentz with hopes of becoming contenders. Now they're stuck in purgatory and faced with a brutal decision.
NFL・28 DAYS AGO
FanSided

Buccaneers made the wrong decision on big free agent

The Buccaneers and Richard Sherman aren’t the match they were made out to be. Hindsight is a dangerous thing. In the moment, it looked like the Buccaneers were becoming a Super Bowl favorite when they signed corner Richard Sherman to their depleted secondary. “The next Super team,” some fans called them.
NFL・15 DAYS AGO