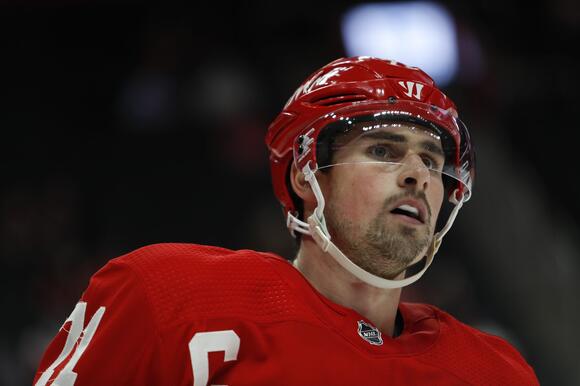 One way or another, it sounds like the Red Wings will be without Dylan Larkin for the next couple games. Maybe longer.

A day after getting ejected from Detroit's season-opener for punching Lightning forward Mathieu Joseph after Joseph slammed him into the boards from behind without being penalized, Larkin was facing a suspension in a hearing with the NHL's department of player safety -- after which he was planning to visit a specialist for an unspecified injury that kept him out of practice Friday.

And Jeff Blashill is understandably 'pissed off' for the Red Wings captain.

"If you remember at the end of last year, Larks late in the game against Dallas got cross-checked to the back of the neck with enough force that he spent the night in the hospital and spent eight weeks in a cervical hard collar," Blashill said. "There was no penalty on the play, which, that happens, things happen fast, and there was no suspension. So if you’re Dylan Larkin, or if you’re us, you kind of think it sets a standard that that's not worthy of (a penalty) and we gotta police ourselves a little bit, and certainly that’s what I think would go through his head."

Playing in his first game since Jamie Benn's cross-check to the neck cost him the final two weeks of last season, Larkin gets run into the boards with his head down -- and his neck bears the brunt of the blow. He gets up and sees that there's no penalty called on Joseph.

"At that point, again, he’s thinking we have to police ourselves out there," Blashill said. "I talked last night about not losing emotional control, but I certainly understand it. I think Larks would tell you he’d like to take that back, that really what he was trying to do was get (Joseph's attention to fight him), but personally we'd like to be in a position where it's just a penalty on the original hit and then I don't know if anything happens. So I feel bad and I feel pissed off for Larks that he’s gotta take that punishment and then feels the need on a regular basis to defend himself. That's just the perspective of what we have."

Blashill also noted that Joseph "took a run" at rookie Lucas Raymond earlier in the game, which also went uncalled. That's part of being a highly-touted rookie in the NHL, and Blashill said both Raymond and fellow rookie Mortiz Seider are "tough, strong kids who do a good job of protecting themselves out there." But the Wings won't tolerate opposing teams targeting their top players much longer.

"I guess if it goes on, we have to get people in here to make sure that we’re protecting them," Blashill said.

So back to No. 71. Blashill said he'll "be disappointed" if Larkin receives supplemental discipline from the NHL; he described Larkin's offense Thursday night as nothing more than "a punch with a glove on." But more concerning to the Wings is Larkin's health. He wasn't able to practice Friday and Blashill said "I really don't know" how long Larkin could be sidelined. Which is another way of saying he doesn't know when Larkin will return. For now, the Wings are hoping for the best and likely fearing the worst. For the 25-year-old captain, any aggravation or reoccurrence of last year's neck injury would be a potentially major setback.

"I feel for him big time, and I kind of waffle between feeling for him and being pissed off that he’s gotta go through that," Blashill said. "It takes a toll on you emotionally. Again, taking that penalty is not something -- and he just told me this: he doesn’t want to take that penalty. We gotta be more disciplined. But as I watched it through, I also personally understand where he’s coming from."

Jeff Blashill’s Detroit Red Wings saw a nice start to the season, and just three games ago, were sitting 8-6-2 with your humble author wondering if maybe, just maybe, they would turn the corner. But losses to Columbus, Dallas, and Vegas place them at 8-9-2 heading into what Bally Sports...
NHL・13 DAYS AGO
Detroit Sports Nation

The Detroit Red Wings lost defenseman Moritz Seider for the second half of last night’s 3rd period against the Vegas Golden Knights after the rookie defenseman blocked a shot and immediately hobbled off the ice, requiring assistance from the training staff to make it to the dressing room. Thankfully, he...
NHL・14 DAYS AGO
Detroit News

Red Wings' Dylan Larkin gets off to a roaring start, despite disjointed season

Detroit — How good has Dylan Larkin been offensively this season?. To put it in perspective, Larkin's goal Saturday in Arizona was his ninth of the season. Last season — and, yes, there were variables such as a shortened NHL season because of the pandemic and Larkin's injury late in the season that forced him to miss games — he scored all of nine goals in 44 games.
NHL・11 DAYS AGO
Detroit Sports Nation

The Detroit Red Wings are 0-3 so far on their four game road swing. For the third straight game, the Red Wings gave up five goals to their oppositions and looked completely hapless defensively. “I thought honestly we obviously made some mistakes and pucks went in, but we were better...
NHL・14 DAYS AGO

Dylan Larkin proving his worth to Detroit Red Wings

While it’s been an up and down season for the Detroit Red Wings, one key consistent for the team has been the play of captain Dylan Larkin. Since scoring the first goal of the season on opening night against the Tampa Bay Lightning, he’s been one of the most consistent producers on the roster, and there’s been a major difference in their overall play when he’s been absent from the lineup.
NHL・10 DAYS AGO
MLive.com

DETROIT – The season has been fragmented and frustrating at times for Dylan Larkin, but the Detroit Red Wings captain has overcome obstacles in what has been the best start of his seven-year career. With 10 goals and 18 points, Larkin has eclipsed his previous highs through 17 games (seven...
NHL・7 DAYS AGO
Yardbarker

The Detroit Red Wings are beginning to emerge from a deep rebuild, and with any luck, will be back in playoff contention within the next few years. Longtime fans can still easily recall the team’s heartbreak prior to its 1997 Stanley Cup championship, not to mention the sustained excellence of the organization from its first modern-day championship in 1997 to its last playoff appearance in 2015-16.
NHL・10 DAYS AGO
Detroit Sports Nation

The Michigan Wolverines defeated the Ohio State Buckeyes on the gridiron on Saturday afternoon, breaking a winless streak against their chief rivals of eight straight games and earning their first ever Big Ten East title; they’ll be competing for the Big Ten Championship this Saturday against Iowa. And you can...
DETROIT, MI・4 DAYS AGO

Captain Dylan Larkin was in a great mood following the Detroit Red Wings overtime win on Saturday night but it was not just his own team’s win that he was happy about. As you can see in the video below, Larkin did his post-game presser in a Michigan hat. “It’s...
NHL・6 DAYS AGO
Detroit Sports Nation

The Detroit Red Wings placed forward Tyler Bertuzzi in COVID-19 protocol shortly before their game tonight at Little Caesars Arena against the Seattle Kraken; Bertuzzi is the only active unvaccinated player not only on the Red Wings roster but in the entire National Hockey League. Following tonight’s 4-3 shootout victory,...
NHL・2 DAYS AGO
Fox17

(WXYZ) — Red Wings goaltender Alex Nedeljkovic paid off a friendly wager he made with forward Dylan Larkin over Saturday's Ohio State-Michigan game. As a result of the Wolverines' 42-27 win over the Buckeyes, Nedeljkovic, an Ohio native, posed for photos wearing a custom No. 71 Michigan football jersey sporting Larkin's name.
NHL・3 DAYS AGO
Detroit News

Ted Kulfan takes a look at the improving Red Wings (12-9-4), who have won four games in a row heading into Saturday's game against the New York Islanders at Little Caesars Arena and ex-Red Wing Nick Libett is the interview guest on this week's podcast. In episode 63 of OctoPulse,...
NHL・10 HOURS AGO

Holland said he made good decisions and bad decisions during his tenure as GM, “probably lots” of both. By the end, he said “it was time for change.”
NHL・24 DAYS AGO
97.1 The Ticket

Sadly, NFL Europe folded in 2007, with five of the six teams based in Germany. The next year, the Lions became the first team in NFL history to go 0-16.
NBA・22 DAYS AGO
97.1 The Ticket

Even O.J. Simpson is perplexed by Lions' offense: "Who is calling these plays?"

Inside Ford Field, Campbell’s play-calling had a lot of fans scratching their heads – or screaming themselves hoarse. Likewise in living rooms around America.
NFL・8 DAYS AGO
97.1 The Ticket

Raymond, Seider go back to back for Rookie of the Month. Nedeljkovic next?

Raymond leads all rookies with 21 points in 23 games on the season. Seider’s 14 points are tied for second. Hey, these guys are pretty good.
NHL・2 DAYS AGO
97.1 The Ticket

'They don't say much about Detroit.' Javy Baez is here to change that.

They can be a great team in the near future, with Baez at the center of it. He knows the road ahead of him, having traveled it with the Cubs.
MLB・2 DAYS AGO
The Associated Press