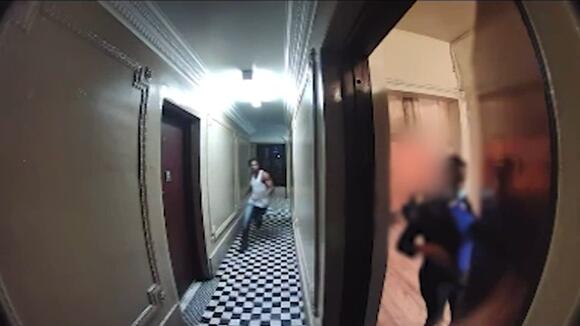 A man with 37 prior arrests has been charged in the case of a woman chased to her Bronx apartment before he tried to break in. Terrifying video of the incident, which happened around 2 a.m. at a multi-unit residential building near East 168 Street and Sherman Avenue in the Concourse Village section on September 23, quickly went viral . Police said tips from the public helped them rack down 41-year-old Orisha Luckey, who is now charged with burglary. The 50-year-old woman was followed into her building, and the video shows her barely getting into her apartment and closing the door mere seconds before the man reaches her. He eventually gave up and fled the scene, and the victim was not hurt, but she was shaken up. She did not want to be identified, but she spoke of the harrowing incident. "There were two guys outside, and they were looking suspicious," she said. "He followed me inside the building, and he said 'Miss, miss,' twice." She said it only took seconds before she realized he was around the corner as she quickly tried to open the apartment lock. ALSO READ | Teen girl shot in head in Brooklyn park released from hospital

Her instincts were spot on, and she said after watching the video that she knows she was very lucky. "I feel very scared," she said. "I was saying, what if? What if I had the top door locked? What if I had the top door locked? He could've gotten me." The victim said she had never seen the man before, but her guard is now up -- and her husband and family now watch her leave the building. ---------- * More Bronx news * Send us a news tip * Download the abc7NY app for breaking news alerts * Follow us on YouTube

Suspects in two unrelated deadly stabbings at or near Penn Station are now in police custody.
NEW YORK CITY, NY・1 DAY AGO
ABCNY

4 wanted in fatal shooting of man, injury of another in Jamaica

Police say a 40-year-old man was shot in the head and chest. He died at Jamaica Hospital.
QUEENS, NY・1 DAY AGO
ABCNY

According to the NYPD, the precincts where both incidents took place each have seen shooting incidents increase by around 37% compared to this time in 2020.
BRONX, NY・2 DAYS AGO

Dramatic video shows the 50 foot tree on Sixth Avenue going up in flames. The suspect is identified as 49-year-old Craig Tamanaha, who is homeless.
MANHATTAN, NY・2 HOURS AGO
ABCNY

A restaurant owner and his nephew's wife could up to 25 years to life behind bars for allegedly setting their Newburgh restaurant on fire in 2017.
NEWBURGH, NY・1 HOUR AGO
ABCNY

Hate crimes are on the rise in New York City, but the NYPD says they are making progress in fighting them.
NEW YORK CITY, NY・13 HOURS AGO

Parents are outraged over a series of fights that have broken out at a high school on Staten Island.
STATEN ISLAND, NY・14 HOURS AGO
ABCNY

A man has died after being shot in the neck in the lobby of a Bronx building.
BRONX, NY・3 DAYS AGO
ABCNY

Police are investigating after a man was stabbed in the eye in Manhattan on Sunday.
MANHATTAN, NY・2 DAYS AGO

Three people, including a child, were injured after the first floor of a Bronx hair salon collapsed into the basement.
BRONX, NY・2 DAYS AGO
ABCNY

Now the officers' story is inspiring others who are holding out hope for their own miracle.
NEW YORK CITY, NY・59 MINUTES AGO
ABCNY

Detectives say the two men had gotten into an argument with another passenger.
MANHATTAN, NY・4 DAYS AGO
ABCNY

Police in Suffolk County are investigating after one man was killed and two others were injured in a shooting on Sunday morning.
SUFFOLK COUNTY, NY・3 DAYS AGO
ABCNY

A search is underway for a man wanted in a knifepoint robbery that took place inside a junior high school in Queens.
QUEENS, NY・4 DAYS AGO
ABCNY

A second man who was stabbed by a knife-wielding suspect near Columbia University on Thursday, was a visiting student doing research at the school.
MANHATTAN, NY・2 DAYS AGO
ABCNY

Gunshot victims were rushed to the hospital after rival gangs opened fire outside the Roosevelt Houses in Bedford-Stuyvesant, injuring eight people on August 16. But when detectives went looking for video evidence, they came up short.
NEW YORK CITY, NY・1 HOUR AGO
ABCNY