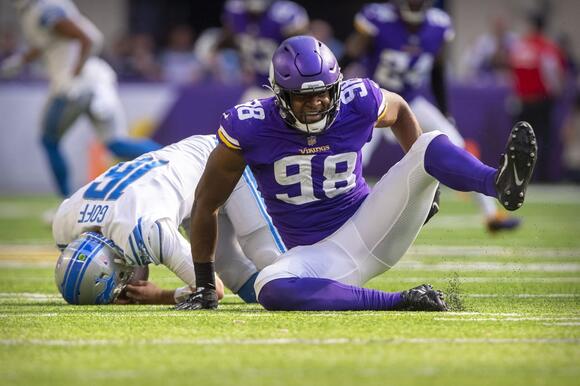 Discover player props odds, plays, and insights for Jared Goff in his Week 6 contest with the Detroit Lions against the Cincinnati Bengals.

Before Jared Goff hits the field for Sunday's game, which starts at 1:00 PM ET on FOX, here are some key facts and figures you should know ahead of placing a bet on his player props. Goff and the Detroit Lions (0-5) take on the Cincinnati Bengals (3-2) in Week 6 at Ford Field.

The Cincinnati Bengals host the Pittsburgh Steelers in what will be the second meeting between these two in the 2021 season. The Bengals are 6-4 and sitting in second place in the division and a No. 5 seed in the AFC playoffs while Pittsburgh is 5-4-1, third in the division, and on the outside of the playoffs looking in longingly.
NFL・10 DAYS AGO
Sports Illustrated

She was on a shoot with SI Swimsuit when Goff threw for the game-winning touchdown.
NFL・2 DAYS AGO
ClutchPoints

The Los Angeles Rams and the Detroit Lions swapped quarterbacks back in the offseason, with Matthew Stafford going to LA and Jared Goff getting shipped to Motown. While it’s clear that the Rams are having considerably more success with their new quarterback than the Lions with theirs, that hasn’t been the case of late, as both teams have gone winless in their respective last three games.
NFL・8 DAYS AGO
Sports Illustrated

Check out odds, plays and more for the Denver Broncos vs. Detroit Lions NFL Week 14 matchup on December 12, 2021.
NFL・4 HOURS AGO

Check out odds, plays and more for the San Francisco 49ers vs. Cincinnati Bengals NFL Week 14 matchup on December 12, 2021.
NFL・3 HOURS AGO
Sportsnaut

Amon-Ra St. Brown is a stud – ‘and will be for as long as he wants to be in this league’

There’s a reason beyond his ball skills that the Lions trust him. But St. Brown’s ball skills are real, along with his knack for getting open.
NFL・2 DAYS AGO
Sports Illustrated

NFL Division Winner Odds: Which Non-Division Leader Would You Bet to Win?

The hierarchy of the eight NFL divisions is beginning to shake out. The Buccaneers, for instance, are -20000 to win the NFC South. It wouldn’t be wise to throw some money on the Saints to make a run and take the division crown considering the chokehold Tampa Bay has on the division.
NFL・11 HOURS AGO

Kirk Cousins Reacts To Losing To The Winless Lions

Kirk Cousins wasn’t happy about losing to the Lions, but he knows the Vikings will have to make short memory of that game. The Steelers come to Minneapolis on Thursday night after a 20-19 win over the Ravens which effectively saved their season. Minnesota, on the other hand, is now...
NFL・2 DAYS AGO
The Spun

A heartwarming video of Jared Goff’s girlfriend, Sports Illustrated Swimsuit model Christen Harper, is going viral on social media. On Sunday, the Detroit Lions won their first game of the season, beating the Minnesota Vikings on a walkoff touchdown. This was the first win for Goff in Detroit, as well as the first win for head coach Dan Campbell.
NFL・2 DAYS AGO
Sports Illustrated

Analyzing the player props to target when the Steelers visit the Vikings this Thursday night.
NFL・13 HOURS AGO
ClutchPoints

Nick Chubb speaks out on Baker Mayfield after tough performance for Browns vs. Lions

It’s been a bumpy road for the Cleveland Browns this year. The offense has struggled at times and the team managed to earn an ugly win over the Detroit Lions on Sunday. Nick Chubb balled out but pointed out how Baker Mayfield’s toughness is keeping the squad motivated. According to...
NFL・17 DAYS AGO
Sports Illustrated

The Detroit QB details how the last 11 months has impacted his outlook on the game. Plus, another tough injury in Baltimore, Tua and the Dolphins are on the rise and more.
NFL・2 DAYS AGO
Sportsnaut

Super Bowl 2022: The Tampa Bay Buccaneers are the reigning NFL champions, but who'll make the playoffs — and lift the Lombardi Trophy at the end of this season?
NFL・1 DAY AGO
SB Nation

To say the Cincinnati Bengals have had a weird 2021 season would be an understatement. The team needed a walk-off field goal to beat the lowly Jacksonville Jaguars in Week 3, lost to the Green Bay Packers in overtime in Week 5 in a game that featured six total missed kicks, and gave up 400 yards passing to Mike White in a Week 8 loss to the New York Jets. Despite all of that, the Bengals still entered Week 13 at 7-4 and with a favorable path to make the AFC playoffs.
NFL・2 DAYS AGO
Sportsnaut

NFL TV ratings, a look forward: The 2021 NFL regular season has arrived, following a 2020 campaign that saw interest
NFL・1 DAY AGO
The Spun

The first NFL team eliminated from playoff contention is shockingly not the Detroit Lions. The Lions entered Sunday afternoon without a win on the season, but they managed to pull one out in shocking fashion, defeating the Minnesota Vikings on a walkoff touchdown. Houston, meanwhile, fell to 2-10 on the...
NFL・3 DAYS AGO
Sportsnaut

The NFL injury report is always filled with some of the game’s best stars, leaving fans and fantasy football managers
NFL・1 DAY AGO
Sportsnaut

Our week 14 NFL Start ‘Em Sit ‘Em fantasy football advice is here. Who should I start? Who should I
NFL・1 DAY AGO
Fox News

Ex-NFL player tees off on Lions' Jared Goff, says he and Colin Kaepernick could play better

The Detroit Lions and Pittsburgh Steelers ended in a tie on Sunday and prompted questions about the future of Jared Goff as the starting quarterback for the NFC North squad. Goff failed to throw a touchdown pass for the second straight game and it was the fifth game this season he failed to throw one. On Sunday, he finished 14-for-25 with 114 passing yards and was sacked four times.
NFL・23 DAYS AGO