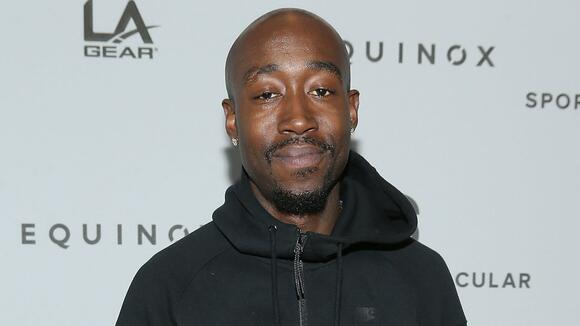 Rapper Freddie Gibbs is the latest entertainer to offer to throw hands with another public figure. The Alfredo creator has challenged sociopolitical activist, Dr. Umar Johnson , to a boxing match for the prize of $5 million.

During an interview following his performance at the Austin City Limits Festival this past Saturday (Oct. 9), Gibbs disparaged the popular pundit, who recently challenged former heavyweight champ, Mike Tyson , to a boxing match earlier this month.

“Dr. Umar soft as hell,” Gibbs told the interviewer backstage. “Dr. Umar gonna pick a fight with Mike Tyson because that’s a political move for the internet but you never said you wanna fight Freddie Kane. Mike Tyson ain’t gonna fight your fat a**, man. You fat as f**k, bro. You cannot f**k with Tyson.”

The Grammy-nominated rapper then threw down the gauntlet, guaranteeing that he’d score a swift victory over Johnson if the two were to ever step in the ring. “I got love for Dr. Umar but I will whoop your a**s in the first round and I will get high and drunk on every drug,” the Gary, Indiana native boasts. “I will f**k you up. I’d need about $5 million to fight you. I got sh*t to do.” Dr. Umar has yet to respond.

Gibbs’ tough talk stems from his latest sitdown on Hotboxin’ with Mike Tyson podcast, in which he commented that Dr. Umar would disapprove of him and Tyson’s relations with white women. Tyson, who claimed to have no knowledge of who Dr. Umar was, voiced his disagreement with Johnson’s train of thought, concluding, “If there’s any hate involved, he can’t be cool.”

After catching wind of Gibbs and Tyson’s comments, Umar issued his own response, promising to go toe-to-toe with Tyson with the only stipulation being that either Bernard Hopkins or Floyd Mayweather help train him to prepare for the bout.

“How much can we charge for the tickets?” Johnson asked. “Iron Mike and King Kong. I’m ready for this as long as Bernard Hopkins is training me. If I can’t get Bernard, I want Floyd [Mayweather].”

Rick Ross feat. Jazmine Sullivan And 21 Savage – “Outlawz” Kicking off the rollout for his forthcoming album, Richer Than I’ve Ever Been, Rick Ross unleashes the debut single from his 11th solo effort, which finds the MMG boss mobbing over an opulent backdrop constructed by AraabMUZIK and Fabian Marasciullo. Featuring Jazmine Sullivan, who lends her lush vocal stylings on the hook, and 21 Savage, who continues to assert himself as one of the best guest performers in the game, “Outlawz” is an impressive effort from Rozay that has fans officially counting down the days to the release of what he...
MUSIC・15 DAYS AGO
Vibe

Don’t call it a comeback or a reunion. New Edition returns, but this time, Roxbury’s finest teamed up with New Kids On The Block for an epic “Battle Of Boston” at the 2021 American Music Awards on Sunday night (Nov. 21). New Edition has not graced the AMA stage since 1997 when they performed “I’m Still In Love With You” from their 1996 reunion album, Home Again, and won the award for “Favorite Soul/R&B Band, Duo or Group.” Ahead of the legendary set, VIBE spoke with Bobby Brown and Johnny Gill to get their take on the “battle,” find out the status of...
MUSIC・5 DAYS AGO
Vibe

Snoop Dogg unveils the music video for “Murder Music,” the lead-single from his forthcoming album, Algorithms, and his first release under the Def Jam umbrella. Directed by D. Baker, the visual takes inspiration from both King Kong and Tha Dogg Pound’s accompanying clip for their own 1995 single, “New York, New York,” with Snoop perched atop the Empire State Building like Kong, and trucking through the Manhattan streets like he did over a quarter-century ago. Yet, this time around, Daz Dillinger and Kurupt are replaced by Benny the Butcher, Jadakiss, and Busta Rhymes, as Tha Doggfather galvanizes the trio of...
NEW YORK CITY, NY・17 DAYS AGO
SPORTbible

Boxing icon Muhammad Ali secretly admitted that he didn’t believe he could beat a prime Mike Tyson in a dream super-fight. That is according to boxing legend George Foreman, who asked his former rival if ‘Iron’ Mike “could beat anybody.”. Ali, who passed away in 2016 at the age of...
COMBAT SPORTS・16 DAYS AGO

It was a horrific week for hip-hop fans following the tragic passing of rapper Young Dolph. The 36-year-old Memphis native was fatally shot during a trip to his favorite bakery back home, ruining the week for all fans of the community leader. Dolph was much more than just one of the successful independent artists of his time -- he was somebody who always looked out for the people around him, including everybody on his Paper Route Empire label, his family, friends, and more. He was a good person, and it's heartbreaking to realize that he's truly gone.
CELEBRITIES・5 DAYS AGO
The FADER

Freddie Gibbs and Jadakiss, both masters of hard street-talk, are in possession of two of my favorite voices in rap music. They last teamed up on “Krazy” way back in 2012. And today, the Indiana and New York rap icons have reunited for the new song “Black Illuminati.”. “They want...
MUSIC・8 DAYS AGO
NME

Madlib has surprised fans by playing two unreleased tracks during his set at Las Vegas’ Day N Vegas last night (November 13). In videos posted on social media, the producer is seen playing an unreleased Black Star number and another unreleased collaboration with Freddie Gibbs. Watch the videos below. Madlib...
MUSIC・13 DAYS AGO

YouTuber Logan Paul has been warned that Mike Tyson would KILL him, were the pair to meet in the ring. There has been increasing speculation that Tyson and Paul will pencil in an exhibition bout for 2022. Tyson made his return to boxing with an exhibition bout against Roy Jones...
COMBAT SPORTS・3 DAYS AGO
Sportsnaut

Mike Tyson’s next fight: Everything you need to know

If you watched Mike Tyson at the height of his powers in the 1980s, and at his lowest lows following
COMBAT SPORTS・1 DAY AGO
DJBooth

This article previously appeared on Audiomack World. Best of the Week highlights the latest and greatest new songs on Audiomack across genres and across the globe. For a playlist of this week’s selections, click here. Freddie Gibbs teams up with the legendary Jadakiss for “Black Illuminati,” recalling both their triumphs...
MUSIC・3 DAYS AGO

Freddie Gibbs' Hilarious Oscars Impression Turns Him Into A Meme

Freddie Gibbs is known to troll people and joke around a lot, even when poking fun at himself. On Wednesday (November 24), Gibbs was in his jokester bag once again when he hit up Twitter with a video of himself pregaming before an event with friends. In the video, fans...
CELEBRITIES・1 DAY AGO
HollywoodLife

Floyd Mayweather Jr. is back with his ex girlfriend Gallienne Nabila, and the couple were spotted enjoying a date night in Los Angeles at a Lakers game. Floyd Mayweather proved his rekindled romance with model girlfriend Gallienne Nabila was going strong when the pair sat courtside at the Houston Rockets and Los Angeles Lakers game on November 2. The boxer, 44, put his unique fashion sense on display in a black sweater featuring a white graphic print, along with ripped black jeans and black leather boots. His on again/off again girlfriend Gallienne, 24, stunned in a black, scoop-neck long sleeved top along with tight leather pants and strappy gold pumps. She accessorized her fit with gold necklaces and rings, as she styled her raven tresses in loose waves.
LOS ANGELES, CA・24 DAYS AGO
golfmagic.com

Phil Mickelson BURNED by his own sister after Tiger Woods tweet

Phil Mickelson has been shut down by his own sister Tina following his most recent tweet to Tiger Woods. Mickelson tweeted a message about his arch rival Woods upon seeing the 15-time major champion take to Twitter at the weekend with a video of his golf swing. Woods' video went...
GOLF・3 DAYS AGO
boxingnewsandviews.com

George Foreman Reveals The Only Fighter Sonny Liston Ever Spoke Of

Former heavyweight champion Sonny Liston was known to be a quiet individual in his time. A man who kept to himself and stuck with his friends and family. A very intelligent man Liston in many ways. He did make some ‘friends’ or ‘acquaintances’ in boxing however. None more so than...
COMBAT SPORTS・2 DAYS AGO

Baby E Talks Working With Lil Wayne, Kevin Gates, Not Being Treated Well From The Other Young Money Artists & More

Baby E recently participated in a Q&A (question and answer) session with a Lil Wayne Discord server that you can read in full below. During their conversation, E discussed a possible collaboration album from himself and Wayne, how a lot of the stuff announced from the Young Money camp is actually all talk, what Weezy is like as a person (says he is very chill but “got a temper from hell though… seem him break a bunch of sh*t), and much more.
MUSIC・2 DAYS AGO
Larry Brown Sports

Floyd Mayweather defeated Logan Paul in a boxing exhibition match in June. Five months later, Mayweather is finally admitting the harsh truth about the exhibition. Paul, 26, is a social media personality. Though he has an athletic background, he is far from a professional boxer. That’s why people were so surprised — and impressed — that Paul lasted eight rounds against Mayweather and looked pretty good. No winner was announced in the fight because it was an exhibition, but Paul was commended for his effort.
COMBAT SPORTS・7 DAYS AGO
HipHopDX.com

The N.W.A biopic Straight Outta Compton arrived in 2015 and painted a Hollywood portrait of the pioneering West Coast gangsta rap group. Considering director F. Gary Gray only had so much time to tell the story, plenty of details were left out. For starters, J.J. Fad wasn’t even mentioned despite their undeniable impact on the success of Ruthless Records and Dr. Dre’s assault on former Pump It Up! host Dee Barnes was conveniently omitted, too.
CELEBRITIES・3 DAYS AGO