Bitcoin at $60K Thanks To (Probable) Bitcoin Futures ETF 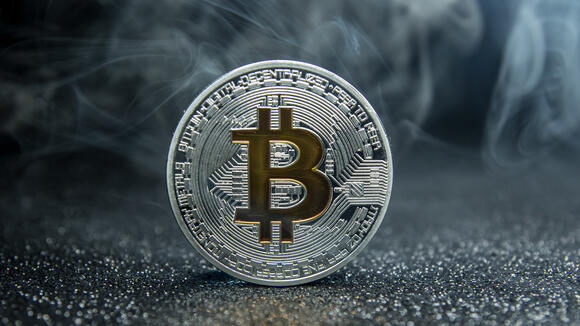 Here we go again. Bitcoin broke the $60,000 ceiling this morning, boosted by the probable debut of a Bitcoin futures exchange-traded fund (ETF) next week.

While a far cry from a “pure” Bitcoin only ETF — which the Securities and Exchange Commission has been stalling its decision on for months now — the new ETF is giving traders and investors hope that this could pave the way for an approval.

“It is clear that the recent spike in BTC’s price is directly related to the rumor that the SEC will move ahead with the U.S. first Bitcoin ETF approval,” Mikkel Morch, executive director and risk management at crypto hedge fund ARK36, told GOBankingRates in a statement. “It is becoming increasingly likely that at least one of the major contenders for a BTC futures ETF, such as Valkyrie or Van Eck, could be approved in the coming days and ahead of SEC’s hard November deadlines. As Valkyrie Investments updated its futures-backed ETF prospectus with the ticker BTF on Wednesday, the company is thought to have the biggest chances of winning this race (in) the near future.”

The ProShares Bitcoin Strategy ETF is scheduled to debut Tuesday at the New York Stock Exchange. Unlike Bitcoin ETF applications that SEC has  rejected, the proposal by ProShares is based on futures contracts and were filed under mutual fund rules that SEC chairman Gary Gensler has said provide “significant investor protections,” Bloomberg reports. The ETF is based on bitcoin futures that trade on the Chicago Mercantile Exchange and seeks to provide capital appreciation primarily through actively managed exposure to bitcoin futures contracts, according to the SEC filing. It does not invest directly in Bitcoin.

More: 8 Best Cryptocurrencies To Invest In for 2021

There is, however, one catch: The ETF goes active unless the Securities and Exchange Commission objects to the filing, which can happen right up until midnight Monday, according to CNBC.

Bloomberg reports, however, that the Bitcoin futures ETF is “said not to face any opposition at SEC, according to multiple sources, and that it’s “pretty much done deal.””

This was somewhat corroborated by the SEC, who tweeted yesterday: “Before investing in a fund that holds Bitcoin futures contracts, make sure you carefully weigh the potential risks and benefits…”

Investors and investment managers have anxiously been awaiting a decision from the SEC on the approval of Bitcoin ETFs, which would have to be traded on the “exchange” — in other words, on the stock market (and therefore, only during the hours the stock market is open). Right now, cryptos don’t have any such limitations and can be traded anytime.

See: How To Make (or Lose) Money With Bitcoin, Explained in One Chart
Find: Offset Crucial Bitcoin Tax While You Can — This Lucrative Loophole Could End in 2022

While several companies have filed crypto ETFs with the SEC, the commission has either rejected or delayed its decisions on many of them. VanEck, for example, registered its ETF in March, and the SEC usually takes 45 days to approve or disapprove a filing. The commission has issued several notices to extend the review period. Just last month, the SEC said it intends to take an additional 60 days to review the proposed rule change and “accordingly, designates Nov. 14, 2021, as the date by which the commission shall either approve or disapprove the proposed rule change.”

Morch adds, however, that a Bitcoin ETF approval is likely already priced in at this point. And that investors should be aware that the hopes for a sustained rally above the $60,000 barrier and further through the previous all-time high may as well turn into a “buy the rumor, sell the news” scenario.

“In any case, it is worth noting that the price went from $40,000 to $60,000 in an almost straight line and it would be natural for Bitcoin to take a breather after such a long run up,” he adds.

This article originally appeared on GOBankingRates.com : Bitcoin at $60K Thanks To (Probable) Bitcoin Futures ETF

As the U.S. Centers for Disease Control and Prevention announced the first confirmed case of the Omicron variant in the U.S. on Wednesday, Dec. 1, the Dow Jones Industrial Average dipped by more than...
STOCKS・22 HOURS AGO
GOBankingRates

Meme Stocks You couldn't turn on the financial news in 2021 without hearing about trading in so-called "meme stocks." Meme stocks are loosely defined, but their most common characteristics...
STOCKS・21 HOURS AGO
GOBankingRates

Do you want to buy Bitcoin? Here is a guide to help you understand how much Bitcoin is and how you can buy, store and manage your your cryptocurrency.
MARKETS・19 HOURS AGO
dailyhodl.com

Economist and trader Alex Kruger says that Federal Reserve Chair Jerome Powell’s remarks at the U.S. Senate hearing on November 30th are bearish for Bitcoin (BTC). Kruger tells his 101,600 Twitter followers that Powell’s comments that the Fed could accelerate tapering by reducing bond purchases and that inflation is not “transitory” weakens Bitcoin’s chances of hitting a new all-time high (ATH) in December.
BUSINESS・20 HOURS AGO

Veteran trader Mark D. Cook, who passed away recently, closely monitored the market's health and was convinced that U.S. stocks are due for a major hit.
STOCKS・18 HOURS AGO
MarketWatch

Cathie Wood is no stranger to big calls – and she's just made another huge one. The Ark Invest founder and CEO told CNBC Wednesday she thinks the metaverse will be a multitrillion-dollar opportunity that will impact every part of the economy. "It's a big idea that will probably infiltrate...
STOCKS・1 DAY AGO
The Motley Fool

All three should be surefire winners over the long term.
STOCKS・1 DAY AGO

A weekly look at the most important moves and news in crypto and what's on the horizon in digital assets.
STOCKS・19 HOURS AGO
u.today

The U.S. Securities and Exchange Commission has expectedly shot down WisdomTree's proposal to launch a spot Bitcoin exchange-traded fund. In its order, the SEC explains that the rejection is necessary to protect investors from "fraudulent" and "manipulative" acts. As reported by U.Today, VanEck's spot Bitcoin ETF proposal was rejected as...
MARKETS・22 HOURS AGO
GOBankingRates

Stablecoins are increasingly under regulatory scrutiny. Just last month, the Treasury Department issued its long-awaited report on the assets, which, when "well-designed and subject to appropriate...
MARKETS・19 HOURS AGO
24/7 Wall St.

The wild back-and-forth swings in the market at these nosebleed levels seem to indicate that some rough sledding could be coming our way. Getting some safety into portfolios now makes good sense.
STOCKS・4 HOURS AGO

The omicron panic is overdone. Buy the dips in these stocks, says JPMorgan.

Stock futures are pointing to a rebound, after reports of the first U.S. omicron coronavirus case clobbered Wall Street in a wild day of trading.
STOCKS・1 DAY AGO
Seeking Alpha

BTC has consolidated nicely after its most recent record run. Cryptocurrencies have been hot in the past few months to say the least, with many of them doubling in that time frame, or better. The mothership, Bitcoin (BTC-USD), has been a relative underperformer given the money that has flowed to smaller coins, but I see the current setup as quite bullish, and I continue to think we’re going to see new highs in the relatively near future. Below, we’ll take a look at why I like the chart for a continued rally, and why the regulatory environment continues to improve for the world’s largest anti-fiat.
MARKETS・1 DAY AGO
dailyhodl.com

One under-the-radar altcoin is surging after a surprise listing by top US crypto exchange Coinbase. In a new blog post, Coinbase says that the Biconomy (BICO) token will start trading on Coinbase Pro later today once appropriate liquidity conditions are met. BICO is an Ethereum-based altcoin that powers Biconomy, a...
MARKETS・1 DAY AGO
MarketWatch

Even the most generous of valuation gauges shows the U.S. stock market is overvalued

The price-to-book ratio is higher, and therefore more bearish, than at almost any other time in recent decades.
STOCKS・3 HOURS AGO
The Motley Fool

Investors could rotate back toward these "pandemic" plays soon.
STOCKS・1 DAY AGO
MarketWatch

The stock is trading at a beaten-down level, and there's a transformation plan starting to get underway.
STOCKS・4 HOURS AGO
The Motley Fool

Is DiDi Global Stock a Buy?