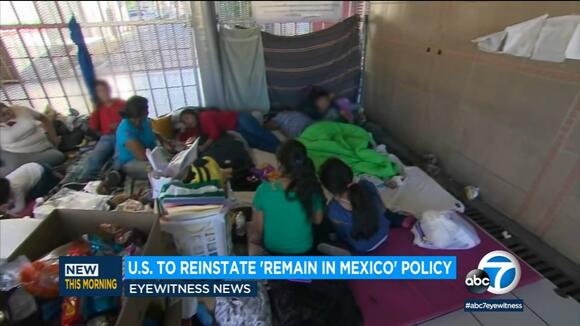 The Biden administration said it plans to reinstate a Trump-era border policy next month to make asylum-seekers wait in Mexico for hearings in U.S. immigration court, complying with a judge's order. It hinges on approval of the Mexican government, which has raised concerns that U.S. officials are working to address, the Justice Department said in a court filing late Thursday. Mexico wants cases to generally conclude within six months and ensure that asylum-seekers have timely and accurate information about hearing dates and times and better access to legal counsel. Mexico also wants exemptions for "particularly vulnerable populations" and better coordination on locations and times of day that asylum-seekers are returned to Mexico. About 70,000 asylum-seekers have been subject to the "Remain in Mexico" policy, known officially as "Migrant Protection Protocols," which President Donald Trump introduced in January 2019 and Biden suspended on his first day in office. A federal judge sided with the states of Texas and Missouri by ordering the Biden administration in August to reinstate the policy "in good faith." The court filing says it should be in effect around mid-November. U.S. District Judge Matthew Kacsmaryk in Amarillo, Texas, a Trump appointee, left open the possibility that the administration could try again to end the policy, and officials say they will release a plan soon that they hope will survive legal scrutiny. U.S. Homeland Security Alejandro Mayorkas ended the policy in June after an internal review, saying it achieved "mixed effectiveness." Illegal border crossings fell sharply after Mexico, facing Trump's threat of higher tariffs, acquiesced in 2019 to the policy's rapid expansion. Asylum-seekers were victims of major violence while waiting in Mexico and faced a slew of legal obstacles, such as access to attorneys and case information. The administration will rebuild tent courts in Texas border cities of Laredo and Brownsville at a monthly cost of $24.6 million to operate, according to the court filing, and is working to ensure there is capacity in a system that is backlogged with 1.4 million cases. Mexico's Foreign Relations Department said Thursday that it has concerns about asylum-seekers getting fair treatment in court under the policy, having access to legal counsel and being safe. Mexico said it also has raised questions about another U.S. policy to expel migrants without a chance to seek asylum. Trump invoked those powers, known as Title 42 authority, in March 2020 on grounds of preventing spread of the coronavirus. The Biden administration has strongly defended the special powers. "Mexico will continue discussion with the U.S. executive branch, with the aim of achieving a regional migration policy that is safe, orderly and regulated," the Foreign Relations Department said. U.S. officials say the renewed "Remain in Mexico" policy will be applied to people who don't qualify for Title 42 authority. The policy was last used largely on people from Spanish-speaking countries but officials say eligible nationalities have not been determined. Broad outlines of the reinstated policy come as the Biden administration has yet to develop the "humane" asylum system that the president promised during his campaign after quickly dismantling many Trump policies. Illegal border crossings have soared under Biden's watch, with record numbers of unaccompanied children and, in September, the arrival of about 15,000 mostly Haitian migrants at a camp in Del Rio, Texas. Homeland Security said in a statement that it "remains committed to building a safe, orderly, and humane immigration system that upholds our laws and values." MORE | Migrant family stuck at border fleeing violence in homeland

A migrant family that fled Nicaragua is detailing the harrowing violence in their homeland and the separation they have endured as they seek asylum in the U.S.

Sparks flew on the set of ABC's "The View" Friday as co-hosts clashed over President Biden's decision to restart the Trump-era "Remain in Mexico" policy. During a segment discussing Biden's decision, co-host Ana Navarro butted heads with Sunny Hostin and guest host America Ferrera over the policy, with the latter two excoriating Biden for breaking his campaign promise to end it, and the former arguing that the policy discouraged people from attempting to make the dangerous journey to the southern U.S. border.
PRESIDENTIAL ELECTION・3 HOURS AGO
Business Insider

John Eastman is the second witness who has invoked or plans to invoke the Fifth Amendment in response to a January 6 committee subpoena.
PRESIDENTIAL ELECTION・6 HOURS AGO
San Diego Union-Tribune

If the president needs to sweat the details before he can end the program, as courts have ruled, he must do so
SAN DIEGO, CA・22 HOURS AGO
CBS News

U.S. finalizes plan to return migrants to Mexico under Trump-era policy as soon as next week

The U.S. government has finalized plans to return non-Mexican asylum-seekers to Mexico under a Trump-era border policy that the Biden administration could reinstate next week because of a federal court order, senior U.S. officials announced Thursday. After months of negotiations, the two countries are close to brokering an agreement to...
POTUS・1 DAY AGO

US human rights groups have criticised the reinstatement of a Trump-era policy requiring asylum seekers to wait in Mexico while claims are processed. The American Immigration Council said it was a dark day for the US and the rule of law. US President Joe Biden had suspended the policy, calling...
POTUS・15 HOURS AGO
Axios

The Trump-era "Remain in Mexico" program will resume Monday as long as Mexico officially approves the plan, as expected Thursday, U.S. administration officials told reporters. Why it matters: President Biden has been forced by court order to restart the controversial program, which makes asylum seekers wait in Mexico for their U.S. court hearings. The administration is simultaneously seeking to end the program, again.
POTUS・1 DAY AGO
spectrumlocalnews.com

US officials: US next week will reinstate policy forcing asylum-seekers to remain in Mexico under court order

SAN DIEGO (AP) — US officials: US next week will reinstate policy forcing asylum-seekers to remain in Mexico under court order. Copyright 2021 The Associated Press. All rights reserved. This material may not be published, broadcast, rewritten or redistributed without permission.
MEXICO, NY・1 DAY AGO
The Associated Press

US will resume policy for asylum-seekers to wait in Mexico

SAN DIEGO (AP) — The Biden administration has struck an agreement with Mexico to next week reinstate a Trump-era border policy that forces asylum-seekers to wait in Mexico for hearings in U.S. immigration court, U.S. officials said Thursday. Revival of the “Remain in Mexico” policy comes under a court order...
POTUS・1 DAY AGO

On Wednesday, I noted reports that the Biden administration had significantly increased deportation flights of recent illegal immigrants to their home countries. This was a break from President Joe Biden’s early commitment to policies supporting open borders and a step toward a law enforcement approach. Today, it is being reported...
PRESIDENTIAL ELECTION・1 DAY AGO
New York Post

US announces deal with Mexico to restart Trump-era asylum policy

The Biden administration will resume the “Remain in Mexico” policy next week after reaching an agreement with the Mexican government, according to the Department of Homeland Security. “Following the Government of Mexico’s independent decision to accept individuals returned pursuant to MPP, the Departments of Homeland Security and Justice will work...
POTUS・1 DAY AGO
Washington Post

The Biden administration has reached a deal with the Mexican government to restart the Trump-era “Remain in Mexico” program that requires asylum seekers to wait outside U.S. territory while their claims are processed, U.S. and Mexican officials said Thursday. Implementation of the program, formally known as the Migrant Protection Protocols...
IMMIGRATION・1 DAY AGO
Washington Times

Mexico said Thursday that it will allow the restart of a Trump-era border policy that immediately sends illegal immigrants back across the boundary after the Department of Homeland Security announced it would speed up court hearings, offer vaccinations and help improve conditions for the migrants. The Biden administration made clear...
POTUS・1 DAY AGO

The immigration pragmatists strike back?

Ever since President Joe Biden ended former President Donald Trump’s most effective border security policies, thus causing a chaotic surge of migrants at the southern border, immigration has consistently been Biden's worst polled issue . As early as August, however, there were rumblings that a “pragmatist” wing in the White...
POTUS・2 DAYS AGO
Business Insider

Insider asked Republicans poised to take charge what they'd do if American voters decide to put them back in the majority in Congress.
U.S. POLITICS・3 DAYS AGO
Fronteras Desk

Monday was the final day of a public comment period for a Department of Homeland Security proposal that seeks to re-establish the Deferred Action for Childhood Arrivals program, or DACA, the Obama-era program that allows some undocumented immigrants brought to the U.S. as children to apply for a work permit and temporary protection from deportation.
U.S. POLITICS・3 DAYS AGO

WASHINGTON, Nov 30 (Reuters) - U.S. appeals court judges on Tuesday signaled skepticism toward former President Donald Trump's bid to keep records about his conversations and actions before and during the deadly Jan. 6 Capitol riot by a mob of his supporters away from congressional investigators. A three-judge panel of...
POTUS・3 DAYS AGO
WashingtonExaminer

President Joe Biden's administration announced its 10th round of judicial nominees last week in an aim to fill vacancies left by a pair of retiring judges from the 2nd and 6th Courts of Appeals, continuing a fast-paced trend of nominations to offset the judicial legacy left by his predecessor.
PRESIDENTIAL ELECTION・4 DAYS AGO
Fox News

MEXICO CITY (Reuters) – The Biden administration and Mexico’s government have still not come to an agreement on the reinstatement of a Trump-era program that forced asylum seekers to wait in Mexico for U.S. court hearings, two Mexican government officials said Wednesday. The news outlet Axios reported earlier Wednesday that...
U.S. POLITICS・9 DAYS AGO