The Molalla Pioneer is the community’s best source for local news, local readers count on. Every day it deliver stories about local people, events and what’s happening at city hall and in local schools.​ 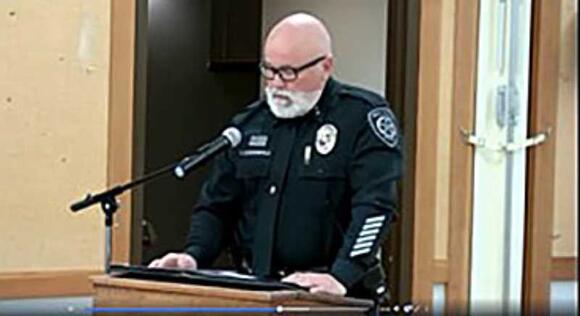 Frank Schoenfeld will retire, Steve Deller will move his family to Texas, they announced Oct. 13.

Schoenfeld has been with the Molalla Police Department for six years.

"I would like to tell you all in person that I have submitted and received acceptance for my retirement," Schoenfeld told the council Oct. 13. "This is kind of hard for me. My last day will be Nov. 30, which makes my retirement date Dec. 1, 2021.

"I've served this agency and this wonderful city of Molalla with great pride for the past almost six years. The most difficult part of this decision is stepping down from my role as chief, your chief. I've tried to do my best to represent you, my department and our citizens."

Schoenfeld has enjoyed a 32-year career in law enforcement. He said he couldn't have asked for more and that he felt "so blessed." But he added that it was time to step down and let "this amazing team" that he's helped build in Molalla continue ahead. He went on to list some of the accomplishments he'd been part of in Molalla.

He said he'd do all he could to help his successor with a smooth transition.

During councilor comments, Deller told the council Oct. 13 would be his final council meeting and he'd miss working with the city and council.

"We got here 13 years ago and thought it would be my forever home," Deller told the council. "I've really enjoyed working with this team here.

"The values of Molalla are just incredible … there's unity and independence -- the people are stubborn and they are helpful and I love it. I wish the State of Oregon espoused the same values as we see here, but it doesn't."

Deller said that he and his family would be moving to Texas, saying they felt a calling to make this move. "God gave us a sign -- we got a definite sign, a real push in that direction," Deller said. "It's all coming together much faster than expected."

New COVID-19 variant, which Oregon has so far avoided, alters state pandemic planningCOVID-19'S new omicron variant raises concerns just as Oregon hit two key markers in its recovery from the deadly delta variant that swept through the state last summer. New infections have fallen under 100 per 100,000 people statewide, while the positive test rate dropped under 6%, according to the latest County COVID-19 Community Transmission Report, released Monday, Nov. 29. The new lows were part of a four-week trend of falling numbers. The good news was tempered by growing concerns of the new omicron variant reported late last week...
PUBLIC HEALTH・2 DAYS AGO
Mollala Pioneer

Brenna Vaughn is executive director of the Northwest Hydroelectric Association. Kurt Miller is executive director of Northwest RiverPartnersHow can Build Back Better not include a staple like hydropower? According to the most recently available data from the state of Oregon, hydropower represents 37% of our electricity resource mix, coal 27%, natural gas 25%, wind 5%, and solar around 1%. The Pacific Northwest, including Oregon, Washington, Idaho and Western Montana, is the largest hydropower producing region in the nation, representing about 40% of U.S. hydropower output. It's no coincidence the Northwest can boast the most affordable clean energy, the lowest...
OREGON STATE・2 DAYS AGO
Portland Tribune

Anyone wanting to have a chance to fill the empty Molalla City Council seat needs to get paperwork in soon. The City of Molalla is looking to fill a vacant city council seat and the deadline for those interested to apply is coming fast. The seat was recently held by...
MOLALLA, OR・9 DAYS AGO
Portland Tribune

Republican lawsuit fails to derail map approved by Democratic lawmakers, and no appeal was filed by the deadline. The congressional redistricting plan passed by the Oregon Legislature's Democratic majorities will stand. A special panel of five retired judges dismissed a Republican-led challenge to it. The panel's Nov. 24 decision will...
CONGRESS & COURTS・9 DAYS AGO

Nonprofit group already has surpassed its previous year's total for distribution. Gleaners of Clackamas County already has exceeded its previous year's total for giving out emergency food boxes to residents, processing over 6.3 million pounds so far this year. As a food-share organization distributing 5.2 million pounds in 2020, Gleaners...
CLACKAMAS COUNTY, OR・8 DAYS AGO
Portland Tribune

On Sunday, Nov. 21, community members gathered in Lake Oswego to protest against Shull, who has faced pushback for bigoted social media posts. In 2020, while walking through the intersection at Carman Drive and Kruse Way, Sarah Al Qirem was told by a classmate that she was unwelcome in Lake Oswego because of her race.
CLACKAMAS COUNTY, OR・11 DAYS AGO
Portland Tribune

8,000-square-foot space designed to meet growing need for food aid across county. Clackamas Service Center will be having a ribbon cutting ceremony at its new warehouse. This creates a second location for the nonprofit organization to serve unsheltered people and families experiencing food insecurity. Clackamas Service Center Executive Director Debra...
CLACKAMAS, OR・10 DAYS AGO

Redistricting court ruling sets off scramble for seats in Salem

Candidates find their footing in new state districts as map guiding new congressional seats awaits decision. Long-delayed campaigns for the 2022 Oregon Legislature were given a green light on Monday, Nov. 22, by the state Supreme Court. Justices dismissed a pair of lawsuits seeking to block a redistricting plan approved...
SALEM, OR・10 DAYS AGO
Portland Tribune

A look at the police and fire calls responded to in Canby and Molalla for the H-P issue of Nov. 24, 2021. 12:35 a.m.: Response to request for motorist assistance. SE 1st Ave. 12:55 a.m.: Subject arrested for DUII and Reckless Driving. Driver was also cited for Driving Uninsured and Exceeding Speed Limit (31+ mph over limit). Hwy 99E.
MOLALLA, OR・13 DAYS AGO
Portland Tribune

Clackamas DA: 'Work to do' on race disparities in criminal justice

The second floor work will allow for a portion of the police command staff to move and create more room overallThe Molalla City Council agreed to a bid that will help them renovate the second floor of city hall in the near future. "This remodel of this particular portion of city hall is based on moving our police command staff to the second floor so we can create a little extra room for our police department until we move them all to their new facility at some point," City Manager Dan Huff told the council. "We know that will take...
MOLALLA, OR・16 DAYS AGO
Portland Tribune

Clackamas County chair: We need to be resilient during disasters

Tootie Smith: Emergency preparedness improvements are well under way in several areas. Fall is a beautiful time in Oregon, especially this year as we turn the corner from the pandemic and close out the wildfire season without any major fire incidents. This fall also delivers a thorough report to Clackamas...
CLACKAMAS COUNTY, OR・18 DAYS AGO
Portland Tribune

Elected board members outline recent efforts to help homeless people in response to leaders urging them to do more. Clackamas County commissioners, in response to last month's joint letter from nearly 160 community leaders urging increased spending on supportive housing services, said the county has either "completed" or is "well underway" on the immediate actions requested.
CLACKAMAS COUNTY, OR・19 DAYS AGO
Mollala Pioneer

Under Supreme Court decision, new sentence is likely life imprisonment; case returns to Clackamas County.Serial killer Dayton Leroy Rogers has had his death sentence overturned again by the Oregon Supreme Court, which under a recent ruling has narrowed the application of the death penalty to match a 2019 law. The latest decision, which the court released Friday, Nov. 12, is likely to result in life imprisonment for Rogers, now 68. He has been in prison since his 1989 conviction on 13 counts in connection with the deaths of six women, whose bodies were found in a forest near Molalla in...
CLACKAMAS COUNTY, OR・20 DAYS AGO
Mollala Pioneer

Aiosa: To honor Oregon veterans, let's ensure all of them are housed

About 1-in-8 of Multnomah County's houseless residents are veterans. Together, we can help get them what they need.A man, recently separated from his wife and living in his car. A former carnival worker who had almost everything he owned â€“ laptop, wallet, cell phone, birth certificate â€“ stolen from him. A cancer patient who suffered three heart attacks between the ages of 50 and 55. What do all three of these very real people have in common? They're all veterans â€“ and until recently, they've all experienced houselessness in Portland. Houselessness has become one of the biggest challenges...
OREGON STATE・25 DAYS AGO

The Molalla Pioneer is the community’s best source for local news, local readers count on. Every day it deliver stories about local people, events and what’s happening at city hall and in local schools.​