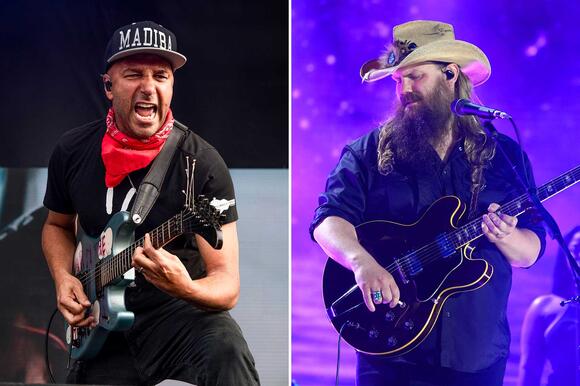 Tom Morello recruited a slew of A-list guests for his new solo album The Atlas Underground , from Bruce Springsteen and Eddie Vedder to Mike Posner and Bring Me the Horizon. He also tapped into the country music world, enlisting Chris Stapleton for the track “The War Inside.” Both the song and the LP are out now.

“The War Inside” opens with the Rage Against the Machine guitarist’s signature tone, a flurry of staccato high-pitched notes that subsides to reveal Stapleton’s earthy vocal. “I can’t leave when I want to/I can’t see when the sun’s gonna shine,” he sings, leading up to a chorus that’s full of desolation, despair, and the realization that something’s got to give. “I need to change the things that I believe,” Stapleton howls, “I can’t win the war inside.”

By song’s end, Stapleton’s vocals are once again framed by Morello’s skronky guitar solo. Stapleton adds some guitar work too, backed by his regular band of drummer Derek Mixon, bassist JT Cure, and guitarist Dave Cobb, who co-produced the track in Nashville. Morello cut his guitar parts separately in L.A. — Stapleton posted a photo of himself on Instagram collaborating with Morello via FaceTime.

“The War Inside” is just the latest guest shot by Stapleton, who has collaborated with artists like Santana , H.E.R. and even Tonight Show host Jimmy Fallon in recent weeks.

Foo Fighters Get the Rock Out, But Not the Demons, in New ‘Studio 666’ Teaser

The Foo Fighters try to rock out in the face of an onslaught of supernatural forces in the new teaser for their upcoming horror-comedy flick, Studio 666, set to arrive Feb. 25, 2022.  The short clip opens like a standard music video or behind-the-scenes rock doc, with the band arriving at the studio, plugging in and starting to play. But in a classic horror twist, things start to go south when the whites of frontman Dave Grohl’s eyes suddenly turn black and then — even more disconcerting — he begins levitating.  The rest of the teaser doesn’t give anything away in terms...
MUSIC・3 DAYS AGO
Rolling Stone

“Weird Al” Yankovic is returning to the road next year for an encore run of his Ridiculously Self-Indulgent, Ill-Advised Vanity Tour that he’s calling The Unfortunate Return of the Ridiculously Self-Indulgent, Ill-Advised Vanity Tour. It will once against focus on his lesser-known album tracks and skip over nearly all of his famous parody songs. It kicks off April 23rd, 2022 and wraps up October 29th with Yankovic’s first-ever show at New York’s Carnegie Hall. Along the way, he’s playing an incredible 133 shows. “I’ve loved doing every single incarnation of my live show, but honestly the Vanity tour is the most fun I’ve...
MUSIC・3 DAYS AGO
Rolling Stone

Adele is an avowed fan of country singer Chris Stapleton, with an appreciation that dates back to his pre-superstardom output. Bonus versions of her 2011 blockbuster 21 even included a cover of “If It Hadn’t Been for Love,” co-written by Stapleton and first recorded by his band the SteelDrivers. While Adele was interviewing for Rolling Stone’s latest cover story, she touched on her Stapleton fandom and their new collaboration. “Basically, I’ve been a fan of him since SteelDriver days,” she said. “I’ve been covering SteelDrivers for like nearly 12 years now. It’s just… his voice is just fucking brilliant.” On bonus versions...
MUSIC・13 DAYS AGO
q106fm.com

Has premiered a new solo song called “The Maze” featuring Andrew McMahon in the Wilderness. With soaring vocals from the “Cecilia and the Satellite” singer, “The Maze” is among the poppiest songs in the Rage Against the Machine guitarist’s catalog, though it still boasts an epic guitar solo. You can download “The Maze” now via digital outlets.
MUSIC・3 DAYS AGO

Listen to Kirk Hammett and Alex Lifeson join Tom Morello on the hard-riffing, EDM groove of new single I Have Seen The Way

’s second album of 2021, The Atlas Underground Flood, is out today and Morello has shared the latest single, which once again sees the Rage Against The Machine guitarist hit up his formidable contacts book for an all-star jam. Even before we get to the track’s electric guitar cohort, I...
MUSIC・3 DAYS AGO
sidestagemagazine.com

Grammy nominees were revealed on Tuesday, (Nov. 23) and with three each, Chris Stapleton and Mickey Guyton tied for most country nominations. Brothers Osborne, Miranda Lambert, and Sturgill Simpson all had two each. Also of note, Carrie Underwood got two nominations, including for Best Roots Gospel Album for My Savior....
MUSIC・12 DAYS AGO
Wide Open Country

We all know that Chris Stapleton has one of the best voices in the country industry, hands down. So why not pair it with one of the best pop voices of all time -- Adele? The duo decided to team up for her recent single, "Easy On Me" off her latest album, 30.
MUSIC・13 DAYS AGO

Tom Morello Had the Perfect Burn for the American Music Awards

The American Music Awards were last night (November 21), and as with most music award shows now, it served as a highlight of the biggest trends in the music industry. Depending on your tastes, the night could have been incredible or incredibly concerning. For Tom Morello, it was the latter....
MUSIC・14 DAYS AGO
WBKR

COUNTRY FANS! You Have to Listen to Adele’s Duet with Chris Stapleton

Let me preface this story with this. I. FREAKING. LOVE. ADELE. And I am still Bitter: Party of One over the fact that when tickets for her last North American tour went on sale, I was on a cruise in the middle of the Caribbean and had ZERO internet access and was unable to get seats. Still not over it. Won't be until she launches the 30 Tour. I am anxiously awaiting that announcement, which I assume will come shortly. But I am pretty pumped about this news too.
MUSIC・14 DAYS AGO
CMT

In very short order, Adele could have a No. 1 country single. Given that her partner on the duet take of her new album 30’s lead single “Easy On Me” — which has been serviced to country radio — is Chris Stapleton, it’s likely also going to be a long-awaited dream come true — she once pegged him as a “dream duet partner” — for the British superstar.
MUSIC・12 DAYS AGO
American Songwriter

It’s the story of ’s life. Writing, recording, and performing manically since he was 17 years old. When his fixed musical state ended abruptly around the onset of the pandemic in March 2020, Morello put down his guitar for the first time in his career. “It was the first creative...
MUSIC・10 DAYS AGO

Tom Morello Says Chris Cornell Had ‘One Foot in the Shadows’

Says his 2007 song “The Garden of Gethsemane” was inspired by a text sent to him by Chris Cornell, after the singer had gone missing for several weeks. They’d already recorded the final Audioslave album Revelations, and the band had gone their separate ways. Morello ended up including the track on his subsequent solo LP One Man Revolution, released under the banner of the Nightwatchman.
MUSIC・3 DAYS AGO
iHeartRadio

Maggie Rose regularly nods to her inspirations in her original recordings, bridging soul, rock, country, and funk alike on the 2021 album Have a Seat. Rose goes straight to one of the sources for a swirling, trippy cover of Rock Hall of Famer Carole King’s “I Feel the Earth Move” that was released on Friday. The track premiered earlier this week on SiriusXM’s Rock & Roll Hall of Fame station, for which Rose did a takeover to play music by some of her heroes. In its original form, King’s is a soulful stomper that leads off the classic album Tapestry. In Rose’s...
MUSIC・2 DAYS AGO
metalinjection

Legendary Black Sabbath riff overlord Tony Iommi is now streaming his new solo single "Scent Of Dark." The single comes alongside a cologne of the same name designed in collaboration with Italian perfume house Xerjoff and Sergio Momo. "I've had the riff for quite a while and I'd never done...
MUSIC・9 DAYS AGO
Webster County Citizen

Tom Morello wants as many "what the f***" factors in his music as possible. The Rage Against The Machine guitarist - who released his second solo album 'The Atlas Underground Fire' last month - has opened up about his need for innovation when it comes to how his instrument sounds on different songs.
MUSIC・5 DAYS AGO
Rolling Stone

The Beatles work through an early version of “I’ve Got a Feeling” in the first full clip from Peter Jackson’s upcoming documentary, The Beatles: Get Back.  Though the clip lasts just over a minute, it offers a fascinating glimpse into one aspect of the group’s creative process. Paul McCartney leads the rest of the band through a rough version of the track, ad-libbing lyrics and calling out chord changes, while George Harrison tinkers with guitar licks and John Lennon throws out some other melody options. The best part of the clip, however, comes at the very end. As the camera captures Lennon...
MUSIC・24 DAYS AGO
WNCY

Chris Stapleton and Old Dominion are stepping up to give back to an organization that supports creators. The two acts have donated items to The ASCAP Foundation’s silent auction to provide access to music education and talent programs for creators. Chris has donated a signed bottle of E.H. Taylor Jr....
CHARITIES・5 DAYS AGO