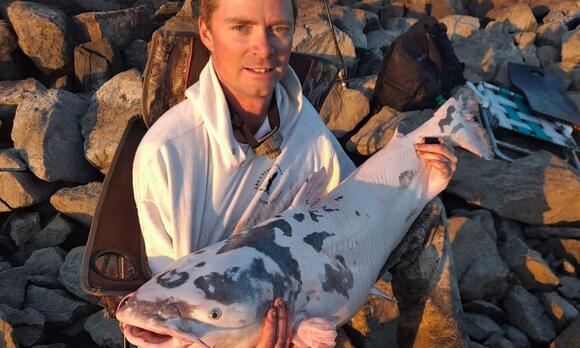 WEST ALTON, Mo. – Chad Hester was doing some overnight fishing this week in the Mississippi River near West Alton. Hester was with a friend when they couldn’t believe what they saw early Tuesday morning.

Using Asian Carp as bait, Hester caught a rare piebald blue catfish. The fish is distinct because it has both white and black markings. Hester quickly took some photos and weighed the fish at 36 pounds.

He then recorded a video showing the release of the fish back into the water.

“That way he can spread his genes in the wild and somebody else might have the opportunity to catch him,” Hester said.

Some fishing enthusiasts refer to the fish as a “one-in-a-million” catch. Hester plans to have someone create a replicate he can hang on his living room wall.

He also hopes anyone searching for some joy in their life will discover their own way to cope with stress.

Hester is a lifelong fisherman who learned how to fish from his father. Fishing helps him escape his worries.

“The second I step out of a vehicle with a rod in my hand and touch water, all that goes away,” he said.

Piebalds resemble ordinary blue catfish but they stand out because their white skin is marbled with prominent grey blotches. This also puts them at a disadvantage in the wild because it sticks out to predators.

How rare are they? For instance, the Lower Mississippi Conservation Committee catches tens of thousands of ordinary catfish every year. In 2014 they only caught two Piebald Blue catfish.

The stretch of the Mississippi River near Alton has seen its share of record-setting catches. A Florissant man caught a record-setting 130 lb catfish there in 2010. An Alton man landed a 124 pounder in 2005 . Piebald Blue catfish don’t appear to get that big but catching one can be just as memorable .

Duck-billed dinosaur may be one of many at Missouri site

ST. LOUIS, Mo. – Finding the fossils of a large duck-billed dinosaur in southern Missouri is exciting enough, but a paleontologist who helped lead the dig believes there are many more in the same area. The latest fossils are a specimen of Parrosaurus missouriensis, first discovered at the site in...
WILDLIFE・14 HOURS AGO
FOX 2

MONROE COUNTY, Mo. – The Missouri Department of Conservation has confirmed that a 16-point deer harvested in Monroe County is an antlered doe. Finding a female deer with antlers is possibly rarer than one in 5,000. Director of Conservation for the Quality Deer Management Association tells the Clarion Ledger that this can happen when the […]
MISSOURI STATE・21 HOURS AGO
FOX 2

An antlered-doe sighting isn't incredibly uncommon, with several sightings surfacing from season to season. Typically, a doe with some kind of antler simply has higher levels of testosterone.
MONROE COUNTY, MO・11 HOURS AGO

It’s a common daydream for anybody stuck in rush-hour traffic to and from work: I wish I could fly over these cars.
FORISTELL, MO・15 HOURS AGO
FOX 2

Bubba the tortoise back on his feet after skateboard success

Dickerson Park Zoo resident Bubba the tortoise is back on his feet after spending nearly a month on a skateboard.
SPRINGFIELD, MO・15 HOURS AGO
FOX 2

Hunters ages 6 through 15 harvested 3,477 during the late youth portion of the 2021 deer hunting season, according to the Missouri Department of conservation.
MISSOURI STATE・1 DAY AGO
FOX2Now

Mark Twain among notables along Missouri’s ‘Way of American Genius’

It’s Mark Twain Day in the state of Missouri. November 30 is the famous author’s birthday. This year, the day marks Twain’s 186th birthday. Twain was born Samuel Clemens in Florida, Mo. in northeast Missouri. His boytown home is in Hannibal. Twain helped put Hannibal on the map. The Mississippi...
MISSOURI STATE・16 HOURS AGO

ST. LOUIS – Tuesday is the second full day of Hanukkah, the Jewish festival of lights, and it is also the 9th Annual Menorah Car Parade. 100 cars are expected to roll starting at 6:30 p.m. from Chesterfield Central Park. Everyone is invited to join the parade. Cars will receive Hanukkah decorations to look the part. Click here […]
CHESTERFIELD, MO・23 HOURS AGO
FOX 2

Spire bills to rise about $14 monthly in St. Louis area

ST. LOUIS – Spire customers in Missouri are about to see a hike in their natural gas bills starting November 30. The rise in rates will be for both Spire East and West customers. Spire East residential customers will see a 22 cent increase per therm while Spire West will see a 39 cent increase […]
SAINT LOUIS, MO・23 HOURS AGO

ST. CHARLES, Mo. – A fire in St. Charles started Saturday due to a space heater being located too close to an inflatable couch. The St. Charles Fire Department said the fire occurred on Greendale Drive and everyone inside the home was able to make it out safely. “We know it’s getting cold out, but […]
SAINT CHARLES, MO・1 DAY AGO
FOX 2

A long-time lottery player from Ferguson has claimed a six-figure Show Me Cash prize.
FERGUSON, MO・1 DAY AGO
FOX2Now

ST. LOUIS, Mo. – Are you decorating your home for the holidays? One family is sharing their amazing display with St. Louis. Kristy Farrell Schires sent FOX 2 a message on Facebook to show off her husband’s Christmas display. It is very impressive. Schires describes the display:. “He hand-made the...
SAINT LOUIS, MO・14 HOURS AGO
FOX 2

Over 15 hours ahead of the grand opening of the Independence, Missouri Whataburger, one super fan was already in line.
INDEPENDENCE, MO・1 DAY AGO
FOX 2

JEFFERSON CITY, Mo. – It will begin to look a lot like Christmas Monday in Jefferson City. The Missouri Governor’s Mansion Christmas Tree will arrive between 7 a.m. and 8 a.m. Monday. The tree’s arrival will shut down a portion of Madison Street. The tree will be on display on Governor Mike Parson’s lawn. This year’s tree […]
MISSOURI STATE・1 DAY AGO
FOX 2

Missouri’s tallest menorah will be lit tonight in University City

ST. LOUIS – Hanukkah, the Jewish festival of lights began at sundown Sunday night. To celebrate, Missouri’s tallest menorah will be lit at 6 p.m. Monday at the Chabad Center along Delmar Boulevard in University City. Additional candles will be lit over the eight nights of the holiday. The holiday marks the rededication of the […]
MISSOURI STATE・1 DAY AGO
FOX 2

A man saved a 3-year-old girl whose mother tossed her out of a second-floor window to escape a fire at an apartment building in north St. Louis.
SAINT LOUIS, MO・1 DAY AGO