Miranda Lambert releases new single, 'If I Was a Cowboy' 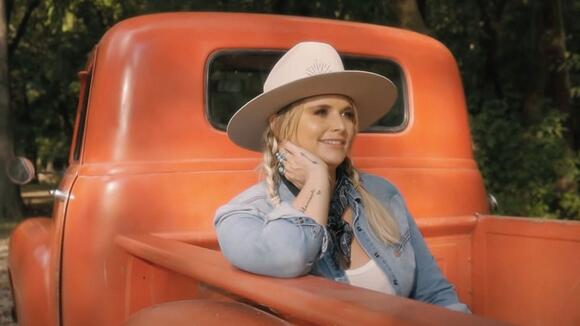 Miranda Lambert is kicking off a new musical chapter on Friday with the release of her dreamy, mid-tempo new single, “If I Was a Cowboy.”

The track paints a picture of life out on the open plains in the West, chasing freedom on horseback and seeing the world from under the brim of a Stetson hat.

MORE: Miranda Lambert cuddles up to her husband in romantic new music video

Lambert co-wrote the song with acclaimed Nashville producer Jesse Frasure, whom she met earlier this year while working on a very different kind of project: The dance remix of her song, “Tequila Does.”

Both creators behind “If I Was a Cowboy” had to dig into their imaginations to write the song, Lambert explained, as neither of them have much personal experience with the Wild West.

“It’s funny, he’s a Detroit boy, and I’m an East Texan, but somehow we wrote a song about the Wild West together,” she said in a statement.

“If I Was a Cowboy” hits radio channels next week.

In addition to gearing up for new solo music, Lambert recently announced that her band The Pistol Annies -- also featuring Angaleena Presley and Ashley Monroe -- will have a new Christmas album out this year.

Miranda Lambert has been keeping a low profile over the past week but that hasn't stopped her fans from checking in on her to make sure she's okay. The award-winning star was inundated with supportive messages urging her to "be safe" over the Thanksgiving weekend, as she shared a heartfelt message with her followers.
CELEBRITIES・18 HOURS AGO
995qyk.com

Kelsea Ballerini has been all over TV this week promoting her new book of poetry, and she shared an embarrassing moment with Drew Barrymore on her talk show about being at an industry party and things getting a bit sticky with Miranda Lambert. Kelsea offered, “I don’t really know Miranda;...
CELEBRITIES・14 DAYS AGO
HollywoodLife

Want to be in a Miranda Lambert music video? On Sunday, November 21, head over to Miranda’s Broadway bar, Casa Rosa, from 1:30pm – 3:30pm for a chance to be featured in an upcoming video. In a social media post, Casa Rosa stated, “If I was a cowboy, I’d be...
CELEBRITIES・12 DAYS AGO

Carrie Underwood and Miranda Lambert have both been nominated for two Grammys, capping off an incredible year for the pair. Both singers are nominated in the best country duo/group performance category; Carrie for her duet with Jason Aldean, and Miranda for her work with Elle King. WATCH: Miranda Lambert shares...
MUSIC・9 DAYS AGO
Outsider.com

The country superstar shared a thankful post on Instagram with her followers. She is beautifully radiant – inside and out. It feels like all celebrities post on Thanksgiving. Some share pictures of their family. Others, like Renee Felice Smith, share their beautiful food spreads. This year, Miranda Lambert shares her gratitude with a gorgeous self-portrait.
BEAUTY & FASHION・6 DAYS AGO
Whiskey Riff

Miranda Lambert is already in the giving spirit this year. With Thanksgiving being tomorrow and the holiday season officially upon us, she’s finding ways to give back through her foundation, MuttNation, and support local animal shelters across the country. They’re planning to give away $1,000 to 20 different animal shelters...
PETS・8 DAYS AGO
101.5 KNUE

So Awesome to See Miranda Lambert Love on Lindale, Texas

Everyone who has stopped in Lindale, Texas or even driven through it, it's easy to see that the whole city loves their hometown superstar, Miranda Lambert. But this love is not one sided as Miranda loves to show the love toward her hometown as well. It's clear as you can see in the video below from the front porch from the house that built her. Not every big time artists shows love back to their hometown, but Miranda is always happy to show some love to Lindale, Texas.
LINDALE, TX・14 DAYS AGO

It’s a big week for Parker McCollum. He just released his debut album, Gold Chain Cowboy, along with a new single and video for “Falling Apart.”. For the video, he played to a sold-out crowd of 20,000, as a film crew shot his concert in Dallas Texas back in July.
MUSIC・11 DAYS AGO
canadianbeats.ca

Toronto-based dance-pop artist Freddie Future is back with his latest single “Haunted“, including a cinematic music video. “Haunted” tells the emotional story of an attempt to make a relationship work even though the sand in the hourglass has run out. It’s an ever-relatable story of being so enamoured with someone it feels impossible to move on. Freddie worked with and friend Anthony Kalabretta to deliver a moody, melodic song that connects with listeners on multiple levels.
MUSIC・9 DAYS AGO
canadianbeats.ca

Raine Hamilton is drawing inspiration from the sky with her new single “Eclipse“. The release of the song coincided with the longest partial lunar eclipse since the 15th century, which occurred in November 2021. Hamilton connected with the event’s symbolism, noting this particular eclipse falls just shy of total darkness...
MUSIC・2 DAYS AGO

Fallon releases new single ‘My Own’

Irish producer and DJ Fallon dropped his new single, ‘My Own’, on Friday. It’s been dubbed as an ‘infectious tech house track from the get-go’. On the new track, Fallon told Mixmag: “I began this tune in the middle of winter during lockdown while I was craving and missing the club scene. I wanted to make a big, pumping club tune and base it all around the huge Whitney vocal, who I've always wanted to sample in a track.”
MUSIC・12 DAYS AGO
thesource.com

Saba has released his new single “Stop That,” which is currently available via The Orchard. The new self-produced track features co-production by Daoud and daedaePIVOT, which is the latest offering from Saba’s highly anticipated third solo album Few Good Things dropping on February 4, 2022. Speaking on the “Stop That,”...
MUSIC・14 DAYS AGO
guitargirlmag.com

Today, Nashville-based singer and songwriter Caroline Romano releases her electrifying new single, “Ireland in 2009.” Arriving on the heels of singles “Oddities and Prodigies” b/w “Lonely Interlude,” “The Hypothetical” and “PDA of the Mainstream,” the heavy-hitting new track is another impressive notch in the belt of this alt-pop trailblazer. An...
MUSIC・8 DAYS AGO
People

Nicole Kidman stepped out in style alongside husband Keith Urban at the 2021 CMA Awards. The Nine Perfect Strangers actress, 54, set the red carpet on fire as she showed off her midriff in an edgy cutout Saint Laurent by Anthony Vaccarello gown at country music's biggest night in Nashville on Wednesday.
CELEBRITIES・22 DAYS AGO
GMA

Florida rapper Lil Pump is officially back with new music, dropping his new single "Contacto" with the self-described "trap queen" from Puerto Rico, Nesi. The track arrives via Pump's new partnership with ONErpm, and it marks a serious shift in styles for the rapper. The Spanish record is expected to be included on Pump's upcoming collaborative album with Ronny J. It comes with a new video, which shows the two artists enjoying party vibes to their record.
MUSIC・6 DAYS AGO
localsyr.com

Baldwinsville natives Patrick, Andrew and Douglas Reeves are back at it again. The triplets also known as Council are debuting a new song just in time for the holidays. The trio formed the group known as “Council” and have performed at multiple New York City venues. They’ve also signed a record deal and are looking to make the next big step in the music industry.
BALDWINSVILLE, NY・10 DAYS AGO
canadianbeats.ca

Multi-award nominated Canadian singer-songwriter JP Sunga has unveiled his new single, “Dirty Water”. “Many of us tend to collect, carry, and keep baggage as we journey through our lives from negative experiences we’ve endured,” JP Sunga shares, “and it can really start to wear us down mentally, emotionally and even physically…
MUSIC・14 DAYS AGO