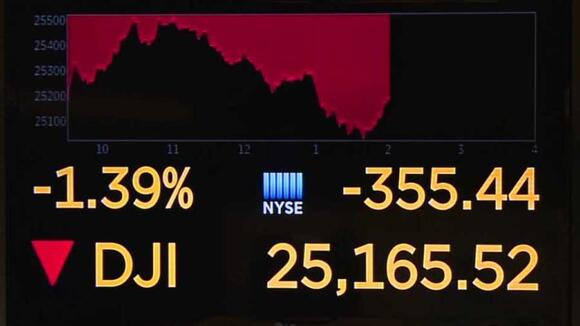 Leading the way for the S&P 500 was freight deliverer J.B. Hunt Transport Services, which peeled to a 5.8% gain after reporting stronger profits for the summer than Wall Street expected. Goldman Sachs and Prologis each rose about 2% on better-than-expected profit reports, while Alcoa surged 14.1% after it beat earnings expectations and announced a dividend payment and buyback of its stock.

They dovetailed with a report showing people spent much more at U.S. retailers last month than Wall Street expected. Sales at stores, restaurants and other retail establishments rose 0.7% from August instead of falling, as economists forecast.

Friday’s gain follows up on a 1.7% jump for the S&P 500 Thursday, its best day since March, which was driven by stronger-than-expected earnings reports and encouraging data on the job market. The S&P 500 is on track for a 1.7% gain for the week and its best weekly performance since July.

It’s a turnaround from a shaky few weeks, when the S&P 500 fell as much as 5.2% from its record set on Sept. 2. Worries about stubbornly high inflation, reduced support for markets from the Federal Reserve and a slowing economy helped to knock stock prices around. The S&P 500 is back within 1.6% of its all-time high.

Earnings reporting season has just begun, but early indicators are encouraging. All but one of the 19 companies in the S&P 500 that reported quarterly results this week topped analysts’ profit forecasts. Such strength is crucial after climbing interest rates heightened worries that stock prices had grown too expensive relative to profits.

The stronger-than-expected reports on the economy also help calm chatter about “stagflation,” which is the feared marriage of a stagnating economy and high inflation.

Of course, all is not clear yet. A report on Friday showing consumer sentiment was weaker than expected amid inflation worries helped to limit the market’s gains.

Still, stocks of companies whose profits are most closely tied to the strength of the economy were leading the way Friday. Other than financial companies, which benefited from the better-than-expected profit reports from several big-name banks, industrial businesses and energy producers were also among the strongest gainers.

Treasury yields also rose following the much stronger-than-expected report on retail sales. The yield on the 10-year note climbed to 1.56% from 1.52% late Thursday.

Higher Treasury yields in recent weeks have been holding back technology and other high-growth stocks recently. When bonds are paying more in interest, investors aren’t as willing to wait as long a time for big profit growth expectations to come to fruition or to pay as high prices for them.

Tech stocks in the S&P 500 rose a modest 0.4% Friday, less than the rest of the market, while the communication-services sector that includes many internet companies slipped 0.1%.

The price of benchmark U.S. oil rose 1.2% to $82.25 per barrel, continuing a powerful run that has sent it up nearly 70% this year and fanned worries about high inflation. The global benchmark for crude also climbed 1%, though the price of U.S. natural gas fell back by 1.4%.

Dec 6 (Reuters) - Early gains in a handful of companies tied to former U.S. President Donald Trump's social media venture fizzled out on Monday after the blank-check firm taking it public said it had received fact-finding inquiries from financial regulators. Digital World Acquisition (DWAC.O) fell 2.9% after gaining as...
STOCKS・15 HOURS AGO
The Motley Fool

Investors are bailing out of vaccine stocks. But should they be selling?
STOCKS・10 HOURS AGO
Motley Fool

Dow Sets Omicron Fears Aside for Best Win of 2021

Wall Street was determined to set omicron fears aside on Monday, after White House Chief Medical Advisor Dr. Anthony Fauci eased concerns regarding the severity of the new Covid-19 strain. The Dow added no fewer than 647 points, erasing Friday's losses and logging its best single-session gain since November 2020. The S&P 500 also logged a substantial win, while the tech-heavy Nasdaq reversed early-morning losses to walk away with gains. Elsewhere, a rebounding 10-year Treasury yield is in focus, while Bitcoin (BTC) partially recovered from this weekend's selloff to trade around $49,000.
STOCKS・22 HOURS AGO

With a volatile market punishing many stocks, these two companies are great investment opportunities right now.
STOCKS・15 HOURS AGO
The Motley Fool

4 of the Safest Dividend Stocks That'll Help You Crush Inflation

Stocks are solidly higher on Wall Street in afternoon trading Monday, aided by a broad rally that includes a mix of travel-related companies that stand to benefit from more reopening of the economy. The S&P 500 rose 1.2% as of 3:41 p.m. Eastern, on pace to make up nearly all...
STOCKS・23 HOURS AGO
The Motley Fool

AMSTERDAM, NETHERLANDS - DECEMBER 02: The passenger of a flight from South Africa is tested for the Coronavirus at Amsterdam Schiphol airport on December 2, 2021 in Amsterdam, Netherlands. The Netherlands and other nations worldwide temporarily banned most travellers from South Africa after a new variant of Covid-19 named Omicron was discovered. Omicron has sparked worries around the world that it could resist vaccinations and prolong the nearly two-year Covid-19 pandemic. (Photo by Pierre Crom/Getty Images) By Pierre Crom/Getty Images MARKET SNAPSHOT.
STOCKS・10 HOURS AGO
Entrepreneur

Fresh restrictions imposed by several countries in response to the spread of the COVID-19 omicron variant have reinvigorated the adoption of advanced technology solutions to support remote lifestyles. Furthermore, increasing...
STOCKS・18 HOURS AGO
24/7 Wall St.

Broadcom, Pfizer and these other top companies are expected to lift the dividends they pay to shareholders, and their stocks are rated Buy across Wall Street, making them excellent total return candidates.
STOCKS・16 HOURS AGO
NBC Dallas-Fort Worth

This ‘Hidden Gem' and Three Other Stocks Look Like Buy-The-Dip Names After a Volatile Week on Wall Street, Traders Say

Stocks are coming off a volatile week on Wall Street. The S&P 500 closed Friday with a weekly loss of more than 1%, its second down week in a row, as inflation worries, a weaker-than-expected jobs report, fears of a Federal Reserve tapering sooner than expected and the arrival of the omicron variant in the U.S. keeping investors on their toes.
STOCKS・20 HOURS AGO
The Motley Fool

The Bitcoin market and the S&P 500 have a big common risk heading into year-end. Are you prepared?
STOCKS・20 HOURS AGO
The Motley Fool

Find out what people are talking about.
STOCKS・9 HOURS AGO
MarketWatch

The Dow Jones Industrial Average on Monday afternoon was on track for its best point and percentage gain in more than a year, as investors bought a recent dip in stocks that has been at least partly precipitated by fears of the COVID omicron variant and worries about Federal Reserve policy. Monday's gains saw the Dow rise 2.1%, or 713 points, which would mark the sharpest percentage gain for the 30-stock index since Nov. 9, 2020 when it gained 834 points, or 2.95%, FactSet data show. The session's gain was being powered primarily by advances in UnitedHealth Group Inc. , Goldman Sachs Group Inc. , Home Depot and Visa Inc. . Only shares of Nike Inc. , salesforce.com and Verizon Communications Inc. were trading in negative territory among the Dow's components in afternoon trade.
STOCKS・13 HOURS AGO
The Independent

A top Wall Street strategist makes the case for quality small-cap stocks for 2022. These five Buy-rated stocks come with solid and reliable dividends, and they look like great ideas now for wary investors.
STOCKS・19 HOURS AGO
The Motley Fool

A surprise equity raise punished MercadoLibre, which is now down significantly from all-time highs.
STOCKS・18 HOURS AGO
The Motley Fool

There weren't a lot of big winners last week, but these stocks posted double-digit gains as many of their peers went the wrong way.
STOCKS・16 HOURS AGO
MarketWatch