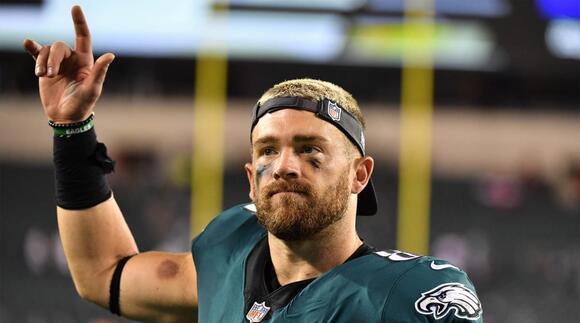 The three-time Pro Bowl tight end is on his way to Arizona.

The Eagles have traded longtime tight end Zach Ertz to the Cardinals for Tay Gowan and a 2022 fifth-round pick, the teams announced.

ESPN's Adam Schefter was the first to report the move.

The 6' 5" tight end was noticeably emotional following the Eagles' 28–22 loss to the Buccaneers on Thursday night. The 30-year-old seemed close to tears as he walked to the locker room alongside teammate Javon Hargrave and shared a moment with Philadelphia VP of security Dom DiSandro.

"I sat at my locker last night and cried for a half hour,” Ertz said on Friday about being traded. "...Philly will always be home. I love Philly.”

Ertz tallied four receptions for 29 yards and a touchdown Thursday night at Lincoln Financial Field. He commented Friday about how playing his "last game at home was special," and he knew he was being traded.

For him, "Philadelphia is home."

"These people love their team. They love the Eagles; they love their players. This city loves their players. They want to see us succeed as much if not more than we want to succeed," Ertz said. "For me, that's just what I loved about this place. People were honest. People, they're blunt. They don't care about you [apologizing] about a game on social media if you play poorly. They want to see you put in the work Monday through Saturday to get better for Sunday.

"For me, I think that's why I resonated in this city. It's because all I knew is how to work hard. That’s why I love this place.”

Ertz is owed approximately $5.5 million this season. He will not be available to play Sunday for Arizona, as players can compete only once a week. Throughout his Eagles career, he tallied 579 receptions, 6,267 yards and 38 touchdowns.

The Cardinals recently lost Maxx Williams to a season-ending knee injury and needed to find someone to fill the spot.

Ertz gave a teary-eyed interview in January when talking about the city of Philadelphia at the end of the 2020 season.

"The foundation that we have here in Philadelphia has been a pleasure," Ertz said. "I think we're just getting started with that [in] Philly. I think this city is the best city to play for and I couldn't have asked for a better experience.

The tight end previously said he wanted to stay with the Eagles but didn't believe the feeling was mutual in September 2020.

"I said all along I want to be here for the long run," he said. "I don't know for sure if that feeling is mutual, but I know I'm going to play this year like it is my last year and I'm going to leave everything I possibly have in the tank for this team."

Ertz was hoping to get a contract extension before the 2020 season, but talks died down when he reportedly received a low offer. He signed a five-year, $42.5 million contract extension in January '16 and reconstructed it multiple times to give the Eagles flexibility with the salary cap.

Ertz, 30, was a staple in Philadelphia since he was drafted by the team in 2013. He was a central part of the team's '17 Super Bowl run, catching seven passes, including a touchdown, in Philadelphia's 41–33 win over the Patriots in Super Bowl LII.

Meanwhile, Gowan has not been active for a game this year after being selected in the fifth round of the 2021 NFL draft.

Week 11 NFL picks: Rounding up the experts' predictions for Eagles vs. Saints

Following a big road win over the Broncos last Sunday, the Eagles return home in Week 11 for a date with the New Orleans Saints, the very same team the Eagles pulled off a big win over last season in Jalen Hurts' first NFL start. MORE ON THE EAGLES. Eagles...
NFL・7 DAYS AGO
inquirer.com

Eagles are alive in NFC East, Aaron Rodgers lies again, and the Philadelphia Union are on the cusp of history | Marcus Hayes

A month ago the Eagles lay listless at 2-5, looking up at the Cowboys, who’d won six in a row and seemed certain to win the division and likely to be the NFC East’s only playoff team. Then the Eagles won three of four, the Cowboys lost three of four,...
NFL・8 HOURS AGO
LehighValleyLive.com

DENVER — When the Eagles play well, as they did in their 30-13 shellacking of the Denver Broncos on Sunday, their 2022 NFL Draft outlook tends to take a hit. But Eagles fans shouldn’t fret, as the team is still poised to control the first-round board with three potential first-round picks.
NFL・11 DAYS AGO
Tyler Morning Telegraph

EMORY — The Tatum Eagles rallied from two touchdowns down in the fourth quarter to force overtime, but came up short after a failed extra point attempt to drop a 56-55 decision to Pottsboro on Friday in Class 3A Division I Region II bi-district action at Wildcat Stadium. Pottsboro (6-4)...
EMORY, TX・14 DAYS AGO

1. Not capitalizing on field position. The Broncos’ offense has had nine drives that started in opponent’s territory this year … and haven’t scored a touchdown. The breakdown: Four field goals, one missed field goal, one turnover and four end-of-game situations. PR Diontae Spencer’s 19-yard return set the Broncos up at the Philadelphia 45 (trailing 20-10) on Sunday. They had to settle for a field goal after RB Javonte Williams’ 20-yard touchdown was negated by penalty and the offense moved backward on TE Albert Okwuegbunam’s penalty.
NFL・11 DAYS AGO
NESN

Cardinals -2.5 Total: 56.0 Over -110 | Under -110 Odds to win Super Bowl LVI: Cardinals +950 | Seahawks +12000. The Seahawks got Russell Wilson back last week, but he put together one of the worst games of his entire career. He completed just 50% of his passes with two interceptions, and he averaged just 1.78 adjusted yards per attempt. Wilson was the league leader in adjusted yards per attempt before that outing.
NFL・9 DAYS AGO
Raleigh News & Observer

Who will win between Cardinals and Panthers? Our Observer experts pick the score

If you are a Carolina Panthers fan and have some sort of free-floating happiness when you hear the words “Arizona Cardinals,” that’s with good reason. The Panthers have been incredibly successful against Arizona. They are 11-4 in regular-season games vs. the Cards, which is the Panthers’ best winning percentage (73.3%) against any NFC team. You may also recall that the Panthers have whipped the Cardinals twice in the playoffs in the past seven years — once in a wild-card game and once in the NFC Championship in an unforgettable 49-15 rout in January 2016.
NFL・13 DAYS AGO
NBC Sports

Jalen Hurts was electric in the first half Sunday against the Broncos, but he attempted just three passes in the second half - one a truly hideous underthrown interception, another nearly picked off. And until Hurts can prove show any semblance of consistent starter-level production with his game, the Eagles...
NFL・12 DAYS AGO

The Carolina Panthers will face the Arizona Cardinals to help kick off Week 10 of the NFL season. It’s time to continue our NFL odds series and make a Panthers-Cardinals prediction and pick. This game is the huge opportunity for the Panthers to right the ship. They will face a...
NFL・14 DAYS AGO
crossingbroad.com

The Denver Broncos play host to the Philadelphia Eagles Sunday afternoon in a critical game for both teams. Denver (5-4) sits last in the AFC West and 11th in the overall AFC standings, but also finds itself just a half-game out of the division lead and a three-seed. Obviously, this is a critical swing game for the Broncos, but the Eagles can also revive a fading season with an upset.
NFL・14 DAYS AGO
SaintsNewsNetwork

RUSK, Texas (KLTV) - The Rusk Eagles will be on upset alert this Friday when they play No. 6 Bellville at Baylor’s McLane Stadium. Rusk is in the second round for the first time since 2018. If the Eagles can pull off the upset the team would be in the third round of the playoffs for only the third time in school history and the first since 2002.
RUSK, TX・10 DAYS AGO

ARGYLE — Not to take anything away from the rest of the Argyle Eagles, but if Jaamael Felton keeps making highlight-reel plays in bunches like he did on Friday, the defending Class 4A Division I champs may be a tough out moving forward. Felton, a junior defensive back and return...
ARGYLE, TX・14 DAYS AGO
USA TODAY Sports Media Group

The Philadelphia Eagles (3-6) travel to meet the Denver Broncos (5-4) Sunday for a Week 10 matchup at Empower Field at Mile High. Kickoff is scheduled for 4:25 p.m. ET. Below, we look at the Eagles vs. Broncos odds and lines, and make our best NFL picks, predictions and bets.
NFL・13 DAYS AGO
UPI News

Nov. 19 (UPI) -- The Philadelphia Eagles agreed to a four-year contract extension with tight end Dallas Goedert, the team announced Friday. The deal keeps the tight end under contract through 2025. Sources told ESPN, the Philadelphia Inquirer and NBC Sports Philadelphia that the pact is worth $59 million and...
NFL・7 DAYS AGO
NBC Sports

The Cardinals don’t have quarterback Kyler Murry or receiver DeAndre Hopkins. But they do have tight end Zach Ertz for backup quarterback Colt McCoy. And Ertz got in the end zone for a 1-yard touchdown to cap Arizona’s 16-play, 82-yard opening drive for a 7-0 lead. McCoy completed 7-of-8 passes...
NFL・5 DAYS AGO

Picks And Predictions For Week 11 Matchup Against The Arizona Cardinals

CBS John Breech expects the Seahawks to win at home this Sunday 20-17. "This is a big game for both teams, but I think it's a bigger game for the Seahawks, because if they lose, they'll fall to 3-7 and their playoff chances will essentially go down the toilet. Also, this week has the feeling of a get-right game for Wilson. For one, the Seahawks are playing at home, which is notable, because they have one of the best home-field advantages in football.
NFL・7 DAYS AGO
NJ.com

Our NFL betting expert is here with best betting picks and predictions for Sunday's matchup between the Arizona Cardinals and Seattle Seahawks, scheduled for Sunday at 4:25 p.m. ET on FOX. After missing two games, Arizona quarterback Kyler Murray appears to be ready to return to the Cardinals. Colt McCoy...
NFL・6 DAYS AGO
NOLA.com

Saints vs. Eagles: Our writers make their picks

Cardinals' Ertz giving back to his new community

PHOENIX — If Kyler Murray returns Sunday in Seattle, that's a big boost for the Cardinals' high-scoring offense. The more points they score, the more hungry mouths they feed across Arizona thanks to the newest Cardinal, Zach Ertz, and his Ertz Family Foundation. Zach, his wife Julie, and The Athletes'...
NFL・7 DAYS AGO