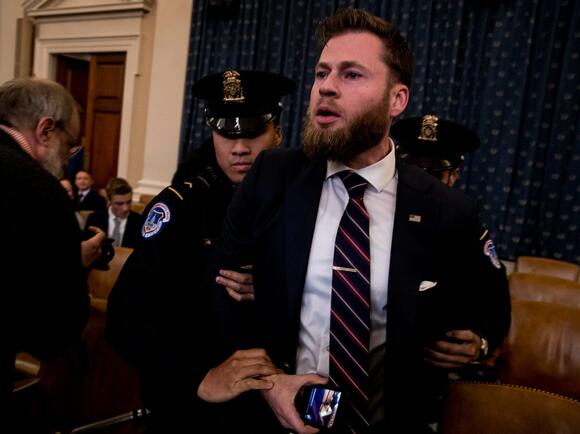 InfoWars host and Capitol riot suspect Owen Shroyer's lawyer compared his conduct on January 6 to "Jesus Christ or the Dalai Lama" in a new court filing.

Shroyer's attorney, Norman Pattis, submitted a filing on his client's behalf on Thursday arguing to dismiss all of the charges being levied against Shroyer, which include:

While Shroyer never entered the Capitol building itself, prosecutors allege he was in a restricted area that he was legally barred from entering due to a previous incident where he interrupted an impeachment hearing against President Donald Trump.

As part of a legal agreement from the impeachment incident, Shroyer was also barred from uttering "loud, threatening, or abusive language, or to engage in any disorderly or disruptive conduct, at any place upon the United States Capitol Grounds or within any of the Capitol Buildings." Prosecutors allege he did exactly that, and led a rally of InfoWars and Trump supporters to interrupt Congress' attempt to certify President Joe Biden's election win.

Shroyer's attorney alleges prosecutors are trying to paint Shroyer as an "unhinged rabblerouser" for speaking outside the building and said if his client's conduct amounts to disorderly conduct, "then Jesus Christ or the Dalai Lama would have been arrested for trying to be a peacemaker on January 6th, 2021."

Shroyer is set for an arraignment hearing on Friday morning. At least 674 people have been arrested in relation to the Capitol riots, but only 100 protesters have pleaded guilty .

Trump's birthday is June 14, 1946. His name (Donald) has six letters, he was born in the sixth month of the year and the sixth year of the decade. 666

WASHINGTON (Reuters) - Lawyers for U.S. Capitol rioter nicknamed the "QAnon Shaman" bickered on Monday over who will now represent him, a week after he was sentenced to more than three years in prison for his role in the deadly Jan. 6 attack. John Pierce, a Los Angeles-based attorney who...
PROTESTS・14 DAYS AGO
NBC Dallas-Fort Worth

Actor Who Performs in ‘Jesus Christ Superstar' and as Michael Jackson Charged in Jan. 6 Capitol Riot

A professional Broadway actor was arrested on charges related to attacking the U.S. Capitol on Jan. 6 with fellow members of the extremist Oath Keepers group. James Beeks, whose stage name is James T. Justis, has been performing recently as Judas in "Jesus Christ Superstar" and also does Michael Jackson impersonations.
CELEBRITIES・13 DAYS AGO
Lake Geneva Regional News

MILWAUKEE — A Broadway actor from Florida who had been playing the role of Judas in a tour of the rock musical "Jesus Christ Superstar" has been arrested in connection with the Jan. 6 riot. James Beeks, 49, of Orlando, was charged with a felony count of obstruction of Congress...
MILWAUKEE, WI・12 DAYS AGO
Orlando Sentinel

An Orlando actor who played Judas in a U.S. tour of the Broadway mega-hit “Jesus Christ Superstar” was arrested Tuesday after federal prosecutors said a member of the Oath Keepers, a far-right militia, claimed the actor joined them in breaching the U.S. Capitol in January. James Beeks, 49, is accused of obstruction of Congress and entering a restricted building, according to a federal ...
ORLANDO, FL・13 DAYS AGO

The U.S. touring production of “Jesus Christ Superstar” has suspended James D. Beeks from its ensemble after the musical theater performer was arrested on charges related to the Jan. 6 attack on the U.S. Capitol. Beeks, whose stage name is James T. Justis, portrayed Judas in the Andrew Lloyd Webber musical.
MOVIES・13 DAYS AGO
Indy100

MAGA fans convinced Patriot Front march was an FBI operation ... because none of them were obese

On Saturday, masked men associated with the hate group “Patriot Front” marched through downtown Washington, D.C. holding American flags, shields, and a large banner that read “Reclaim America”. But some right-wingers are convinced that all wasn’t as it seemed - even though the January 6 riots showed that Biden opponents...
PROTESTS・4 HOURS AGO
KXRM

James Beeks, who has performed in a traveling production of the musical “Jesus Christ Superstar” and as a Michael Jackson impersonator, initially rejected being represented by an attorney and made comments that the judge called “gobbledygook.”
CELEBRITIES・7 DAYS AGO
FOX43.com

WASHINGTON — A California man already facing serious felony charges for allegedly using an electroshock device against a downed police officer on January 6 is now accused of conspiring with two friends to commit violence, according to a new indictment unsealed Monday by the Justice Department. Daniel Rodriguez, 38, of...
ADVOCACY・6 DAYS AGO

Marjorie Taylor Greene Says Jailed Jan. 6 Defendants Abused ‘Because of the Color of Their Skin’

Georgia Republican Rep. Marjorie Taylor Greene claimed that the people behind bars for their alleged role in the Jan. 6 Capitol riot is being abused and mistreated in jail “because of the color of their skin,” implying that the mostly white defendants are being treated worse than other prisoners because of racism.
ADVOCACY・2 HOURS AGO
FOX2Now

SPRINGFIELD, Ill. (NEXSTAR) — A Chicago man charged Wednesday for storming the U.S. Capitol on January 6th is also heavily involved in the campaign to elect state Senator Darren Bailey governor. Lawrence Ligas, a 62-year-old man, was arrested and charged with entering and remaining in a restricted building, disorderly and...
SPRINGFIELD, IL・5 DAYS AGO
Business Insider

Actor James Beeks narrowly avoided detainment after several outbursts in which he rejected the court's authority during his Monday hearing.
U.S. POLITICS・7 DAYS AGO
The Independent

A 56-year-old man was charged with carrying a loaded firearm on the Capitol grounds during the 6 January riot by supporters of then-president Donald Trump in an attempt to stop the certification of the 2020 presidential election results. Mark Mazza of Shelbyville, Indiana said he participated in the “Stop the Steal” rally that preceded the riot and then went to the Capitol, according to court documents first reported on by Politico. Mr Mazza said in an interview that he reported a gun, a Taurus revolver, as being stolen, therefore allegedly falsifying a report. Similarly, Mr Mazza said in an...
PROTESTS・15 DAYS AGO

A Broadway actor currently playing Judas in a national tour of Jesus Christ Superstar was arrested Tuesday for allegedly taking part in the January 6 attack on the US Capitol, after federal agents conducted a sprawling investigation on the performer and attended several productions of the play to ensure they had the right man.
12 DAYS AGO
WashingtonExaminer

Capitol riot investigators have found evidence possibly linking the Trump White House to the Justice Department in efforts to overturn the results of the 2020 election.
GEORGIA STATE・20 HOURS AGO
Reuters

WASHINGTON, Dec 7 (Reuters) - Mark Meadows, who served as former President Donald Trump's White House chief of staff, has decided not to cooperate with the congressional committee investigating the deadly Jan. 6 U.S. Capitol riot, and the panel said on Tuesday it is prepared to pursue contempt charges against him.
POTUS・32 MINUTES AGO
Business Insider

Brandon Fellows submitted several filings in which he lashed out against his previous counsel and admitted to committing obstruction.
POLITICS・4 DAYS AGO

Benjamin Ginsberg, a veteran Republican election lawyer, just issued a stark warning to lawmakers in his own party: If you don’t act now to protect our system, the losing candidate in the 2024 presidential election might seek to overturn the will of the people — and succeed. Opinions to start...
PRESIDENTIAL ELECTION・1 DAY AGO
Fox News

Tucker Carlson: Peaceful assembly is suddenly a crime depending upon who you voted for

If you’re planning to be in Washington DC tomorrow, your nation's capital, be careful. A group of political extremists plan to shut down the city. We're not guessing about this because they’re not subtle about what they intend to do. They literally call their group, "Shut Down DC." On their...
POLITICS・15 HOURS AGO
New York Post

Bob Dole to lie in state at Capitol, funeral Friday at National Cathedral

Sen. Bob Dole’s casket will lie in state in the US Capitol on Thursday as congressional leaders honor the former Republican presidential candidate and World War II veteran who served in Congress for 36 years. Dole will then have a state funeral on Friday at the Washington National Cathedral, a...
CONGRESS & COURTS・1 DAY AGO