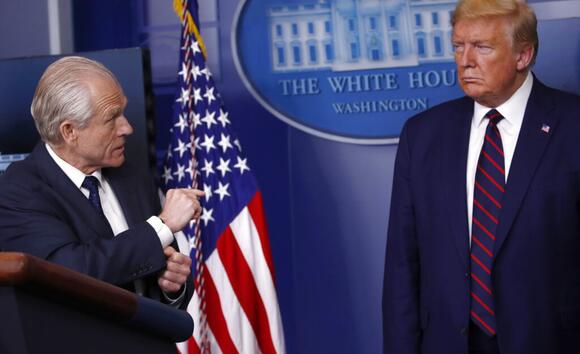 Initially, nobody seemed to care as Democrats embraced President Joe Biden and Republicans shucked politics, some feeling they were robbed in a corrupt election.

But less than nine months later, the desire among many conservatives for what really happened inside the Trump White House has opened the door to a new wave of books, podcasts, movies, and social media posts from key aides who have found a way around the liberal media’s gates.

“There's a genuine thirst for the truth about the Trump administration, particularly in the last year during the pandemic,” said Peter Navarro, an author, economist, and former President Donald Trump’s former trade and manufacturing czar.

Noting how New York has only offered critical books about Trump, he said, “Really, there hasn't been anybody who has offered the story from the Trump side of the ledger.”

Navarro has witnessed that thirst himself. The presidential confidant’s new book, In Trump Time: A Journal of America's Plague Year , isn’t being released until Nov. 2 and already has presales of over 200,000.

Navarro credits his use of new technology and his reputation as a plugged-in, straight shooter who took meticulous notes while serving Trump. He calls his a “book of revelations.”

Clearly, something is going on in conservative circles where Trump has revived an interest in his political efforts and sparked attention to Biden’s destruction of policies that worked well in the Republican’s administration.

Trumpers have found new outlets that get around the mainstream world that includes Facebook and Twitter. Former Trump aide Jason Miller’s Twitter-like platform GETTR has fast become home for many looking for conservative news. And other outlets, such as Steve Bannon’s War Room podcast, have also exploded.

Navarro told us of a video test he did pitching his book on Twitter and GETTR that shows the influence of Miller’s new operation. “I put the same video on GETTR and Twitter. I've got over 180,000 followers on Twitter. I get literally a 10-1 greater response on GETTR. I call GETTR the Twitter killer,” he said.

Miller said that with the book and social media campaign, "Peter Navarro is taking a bunker-buster approach to Big Tech and the fake news media.”

GOP pollster John McLaughlin said he has found a growing interest in Trump’s accomplishments and a desire, even among some Democrats, for the former president to run in 2024. That, he added, has prompted a new interest in the Trump years.

“In the polling right now, there is real buyer's remorse,” McLaughlin said. Even some “people that supported Joe Biden are like, ‘We made a mistake.’ And so, there'll be an interest in Peter's book, and there will be an interest in more books that are positive for Trump.”

maybe like the truth that Trump told Bob Woodard on Feb 3, 2020? you know, when he was recorded telling Woodard that the virus was, "5x more deadly than a strenuous flu"? or maybe when he said, "this is deadly stuff Bob"? if Trump had come out day one and told the public what he told Bob Woodard in Feb 2020, I believe I know at least 3 friends who might still be here today. but he didn't. he told Woodard, "I like to downplay it.."Trump's handling of the pandemic was much like his handling of Trump University. lie. deceive. downplay. cause harm. then claim victory. then lie some more. he will go down as one of the very worst presidents we've ever had.

didn't Trump tell the world that if he lost the election we will probably never see him again just goes to show you it's one lie after another for 4 years he threw out more than 35,000 lies

yeah the cult lives it. they talk of civil war bring back slavery since they are such good working people. hypocrisy. oh and throw around words like patriots and Christian beliefs.

In the latest sign that President Joe Biden is falling out of favor, the public now thinks that former President Donald Trump handled the coronavirus crisis better.
PRESIDENTIAL ELECTION・1 HOUR AGO
WashingtonExaminer

Next up: Trump to write White House memoir

White House put on the defensive over COVID-19 testing plans

The White House is facing questions over its plans to increase testing for COVID-19, which include reimbursing the costs for tests but not mailing them to every resident as some foreign countries are doing.
POTUS・19 HOURS AGO
AOL Corp

That was the worn-down venue in Philadelphia where Donald Trump’s lawyer, Rudy Giuliani, launched the doomed effort to block Joe Biden’s win in the 2020 presidential election. The Giuliani group meant to book the Four Seasons hotel, but somebody goofed and Giuliani ended up spouting his familiar election lies in front of an industrial garage door plastered with Trump signs. The Trump effort to overturn the election never got any more professional than that.
POTUS・19 HOURS AGO

Biden lead Trump by one point, 46% to 45%, in a Wall Street Journal poll full of bad news for his agenda and Democrats' chances in 2022.
PRESIDENTIAL ELECTION・21 HOURS AGO
Fox News

Christie says another Trump presidency is 'up to the voters,' won't 'rule out' his own 2024 White House bid

EXCLUSIVE: Former New Jersey Gov. Chris Christie said it will be "up to the voters" on whether former President Trump should return to the White House but said he wouldn't "rule out" his own 2024 presidential bid. In his new book, "Republican Rescue: Saving the Party from Truth Deniers, Conspiracy...
PRESIDENTIAL ELECTION・22 HOURS AGO
WashingtonExaminer

BREAKING — A federal judge today set a July 18 date for STEVE BANNON’s trial for contempt of Congress, Kyle Cheney reports. The date essentially splits the difference between the Justice Department’s request for April 15 and Bannon’s ask for Oct. 22. — What this means for the Jan. 6...
U.S. POLITICS・22 HOURS AGO

President Joe Biden is setting records for his sparse outreach to the press, notching a fraction of the face time with journalists that his recent predecessors gave.
PRESIDENTIAL ELECTION・5 HOURS AGO
Fox News

Fox News Contributor Lara Trump joins Fox Across America With Jimmy Failla to weigh in on the turmoil in Vice President Kamala Harris’ office and the VP’s treatment of her former employees. Lara discusses why she thinks so many staffers have recently left Harris’ office. She also shares her thoughts...
PRESIDENTIAL ELECTION・1 DAY AGO
Fox News

A column published in the Washington Post received plenty of fanfare from other members of the media and even the White House for suggesting that President Biden has received "worse" media coverage than former President Trump. Post columnist Dana Milbank went viral on Friday with a piece complaining about the...
PRESIDENTIAL ELECTION・1 DAY AGO
The Guardian

It is a festive family photo with seven broad smiles and a Christmas tree. But one other detail sets it apart: each member of the Massie family is brandishing a machine gun or military-style rifle. The photo was tweeted last week by Thomas Massie, a Republican congressman from Kentucky, with...
POTUS・1 DAY AGO
WashingtonExaminer

Capitol riot investigators have found evidence possibly linking the Trump White House to the Justice Department in efforts to overturn the results of the 2020 election.
GEORGIA STATE・1 DAY AGO
Washington Post

How can the people who have seen the worst of Trump still think the best of him?

A casual consumer of the news could be forgiven for thinking that former White House chief of staff Mark Meadows had broken with former president Donald Trump last week. News stories touted Meadows’s revelation in a new memoir that Trump had concealed a positive test for the coronavirus three days before his first debate with Joe Biden. Meadows also announced a newfound willingness to cooperate with the House committee investigating the Jan. 6 insurrection.
POTUS・1 DAY AGO
USA TODAY

Benjamin Ginsberg, a veteran Republican election lawyer, just issued a stark warning to lawmakers in his own party: If you don’t act now to protect our system, the losing candidate in the 2024 presidential election might seek to overturn the will of the people — and succeed. Opinions to start...
PRESIDENTIAL ELECTION・2 DAYS AGO
WashingtonExaminer

White House press secretary Jen Psaki sidestepped a question about the authenticity of Hunter Biden’s laptop, which he had previously dismissed as Russian disinformation, during Monday’s briefing.
U.S. POLITICS・1 DAY AGO
WashingtonExaminer

The Biden administration has been dealing with a major crime spike in 2021, and White House press secretary Jen Psaki says the president is ready to outspend his predecessor in pursuit of a solution.
PRESIDENTIAL ELECTION・1 DAY AGO
New York Post

In a sign of just how detached from reality this White House has become, presidential Chief of Staff Ron Klain urges you to consider the idea that the press is being tougher on President Joe Biden than on his predecessor. Klain tweeted “for your consideration” with a link to Dana...
PRESIDENTIAL ELECTION・1 DAY AGO