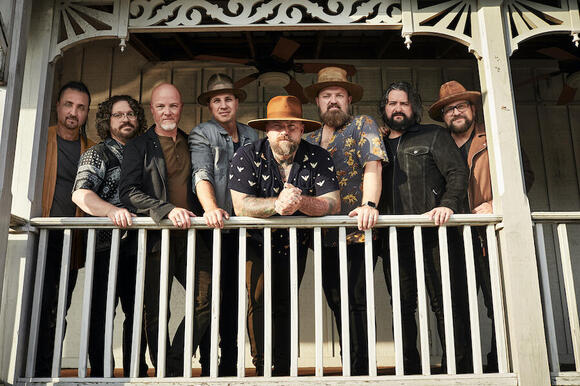 Zac Brown Band 's new album, The Comeback , has officially arrived, and the guys are keeping the celebration of new music going on October 21st during their iHeartCountry Album Release Party.

In a statement, Zac Brown said of the new album, " The Comeback celebrates our collective resilience as a community. This music is about standing together and rediscovering our roots and what makes us human. We feel incredibly blessed to be back out on the road again, sharing these new songs with our fans. The only good thing about getting knocked down is The Comeback when it comes back around."

During their exclusive iHeartCountry Album Release Party, Zac Brown Band will perform their new music live, in addition to fan favorites from previous albums, as well as talk about The Comeback and more during an exclusive Q&A hosted by Bobby Bones .

Fans can listen and tune in free for a stream of the exclusive iHeartCountry Album Release Party with Zac Brown Band on Thursday, October 21st at 7pm local time via an exclusive stream on LiveXLive on livexlive.com or the LiveXLive app. Fans can also listen to the show via iHeartRadio's iHeartCountry Radio station.

Get pumped for the exclusive iHeartCountry Album Release Party with Zac Brown Band by listening to some of their The Comeback songs below.

After spending an "enormous" time apart because of the COVID-19 pandemic, Zac Brown Band members came back with their own "new little twist to their musical personality."
MUSIC・6 DAYS AGO
wbwn.com

Why Did Zac Brown Name His Album 'The Comeback?'

Zac Brown is back and bringing people closer together. His smash hit, "Same Boat," has become a feel-good anthem for all of us as we look for human connection, hope and unity. ZBB is known for churning out the hits, selling out stadiums, and putting "fried chicken" back on the menu, so the new album's title, "The Comeback," has piqued some interest.
MUSIC・21 HOURS AGO
froggyweb.com

Zac Brown is in a “great headspace” after months of touring

After a challenging year, Zac Brown Band is moving into a more positive headspace. Frontman Zac Brown reveals that he ended up borrowing money last year to help support his touring family after they had to cancel The Owl Tour in response to the COVID-19 pandemic. “Everybody had my back for a lot of years before this, so I had to step up and figure out how to borrow enough to help everybody survive, but we did it and we’re working our way out of the hole right now,” Zac explains.
MUSIC・5 HOURS AGO

The Legendary 1979 No Nukes Concerts, an archival film and album focusing on the performances that Bruce Springsteen and his E Street Band gave during a series of historic, star-studded environmental-themed shows in New York City, got its release today on DVD, Blu-ray and audio formats. The film and companion...
MUSIC・10 DAYS AGO
sbstatesman.com

Read Southall, lead singer of his self-titled band, discussed the heart and soul that has gone into all of his lyrical projects, including the band’s most recent album release, “For The Birds,” in an interview with The Statesman. The album dropped Oct. 22, containing songs that both adapt and cherry-pick...
MUSIC・6 DAYS AGO
New Jersey 101.5

Singer-songwriter and former Gaslight Anthem frontman Brian Fallon has released his fourth solo album. Fallon recorded "Night Divine" at his home throughout quarantine, and had his mom contribute to several songs on the album. In an interview with New Jersey Stage, he says this is the first type of music...
MUSIC・14 DAYS AGO
KGET

Blur‘s Dave Rowntree has signed a deal with indie label Cooking Vinyl to release his debut solo album. As well as enjoying success as Blur’s drummer since 1988, Rowntree has more recently been working on music for film and TV. His compositions have appeared in titles such as the Bros documentary After The Screaming Stops, BBC series The Capture and Netflix’s The One. He also hosts The Dave Rowntree Show podcast on Spotify.
MUSIC・13 DAYS AGO
Punknews.org

Seattle based Worst Party Ever have announced that they will be releasing a new album. The album is called Dartland and will be out digitally December 17 and physically January 21 via No Sleep Records. The band have also released a new song called "Prism On A Window". Worst Party Ever released here, online in 2020. Check out the song and tracklist below.
SEATTLE, WA・11 DAYS AGO
The FADER

How Long Gone, the self-described "bi-coastal elite podcast," are set to release their first album. Adds Color is due on December 17 and will be available exclusively via double CD. In what might sound like a podcast episode, but is definitely an album, hosts Jason Stewart and Chris Black recorded an 80-minute chat in which they discuss a series of releases from Jagjaguwar label mates including Bon Iver, Angel Olsen, Moses Sumney and more.
MUSIC・8 DAYS AGO
tompkinsweekly.com

Sharing a deep love of music, four Trumansburg alumni and childhood friends formed the indie alt-rock band Cold Springs Rd. two years ago as a tribute to the village they all grew up in together and still happily call home. And now, the band is months away from releasing their second album.
TRUMANSBURG, NY・7 DAYS AGO

Vernon of K-pop boyband SEVENTEEN has surprised fans with a brand-new solo song, ‘Bands Boy’. The trap-driven track features lyrics written by the K-pop idol, who also co-composed the track with producer Cribs. ‘Bands Boy’ is Vernon’s first solo release since 2015, when he dropped the digital single ‘Lotto’, as well as the songs ‘B Boy’ and ‘Lizzie Velasquez’ on SoundCloud.
MUSIC・7 DAYS AGO
udiscovermusic.com

Fresh off earning her first No.1 album on the Billboard 200, R&B star Summer Walker has been announced as the latest performer at the 2021 Soul Train Awards, which tapes at the Apollo Theater in Harlem on Saturday and airs on November 28. Walker’s sophomore album, Still Over It, earned...
CELEBRITIES・9 DAYS AGO
The Boot

Miranda Lambert is excited to open the 2021 CMA Awards for reasons both obvious and not. The 55th Annual CMA Awards also falls on her birthday — a birthday that promises to get rowdy if one of her newest friends has her way. "I can't tell you much, other than...
MUSIC・19 DAYS AGO
BET

2021 Soul Train Awards: The Different Layers Of Style And Swag That Is Alicia Keys

Alicia Keys has been gracing us with her musical talent for the past two decades, and there hasn’t been a dull moment yet. While she may be known for her soulful singing, classically-trained piano skills, and braided hairdos, we’re also endlessly impressed by her fashionable clothing choices—especially on the red carpet.
BEAUTY & FASHION・13 DAYS AGO
iHeartRadio

Underwood said of her Disney World experience: "We rode lots of rides, ate lots of sugar, smiled a million smiles and made a million memories!!!"
CELEBRITIES・5 DAYS AGO
E! News

Watch: Necessary Realness: BTS & Megan Thee Stallion FINALLY Together. Megan Thee Stallion announced that she's no longer performing at the 2021 American Music Awards on Sunday, Nov. 21. The award-winning rapper, who was scheduled to hit the stage with BTS to perform their hit track, "Butter," shared the news on Saturday, Nov. 20.
MUSIC・9 DAYS AGO
Deadline

Colombian singer Karol G is sore all over but basically okay after suffering a long fall on a stage staircase. Performing on Friday at the FTX Arena in Miami, the Colombian reggaeton star started to descend a long staircase at the start of a song. But as the footage shows, she missed a step and went tumbling down. Fortunately, she quickly recovered, and the crowd cheered as she arose from the bottom of the stairs and continued on. “All my nails broke, I think my knee broke. Everything hurts,” she told the crowd in Spanish later in the show. “After having filled this arena for the first time in my life… I wanted it to be perfect,” she added. Carolina Giraldo Navarro is a 30-year-old singer. She won the Latin Grammy Award for best New Artist in 2018 and has been nominated for several Billboard Latin Music awards. View this post on Instagram A post shared by Carlos Adyan (@carlosadyan)
MUSIC・1 DAY AGO
Audacy

What to expect from the 2021 Soul Train Music Awards

Set your reminders, because the 2021 Soul Train Music Awards are set to air on BET and BET Her this coming Sunday, November 28, with a two-and-a-half-hour special featuring must-see performances and more.
MUSIC・7 DAYS AGO