Elon Musk's Tesla is up $1 billion on its $1.5 billion bitcoin investment as the cryptocurrency soars 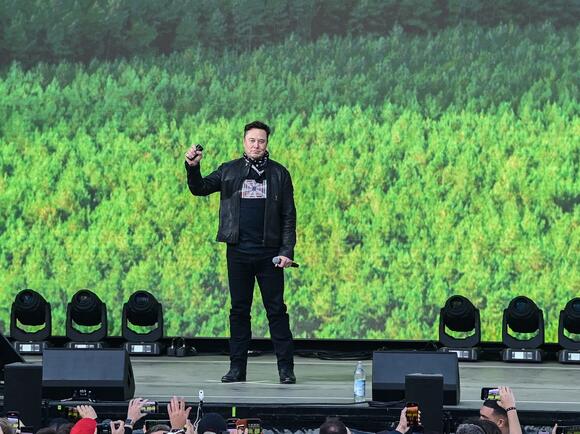 Elon Musk's vow that Tesla will hold onto its billion-dollar-plus investment in bitcoin is paying off as ETF excitement drives the coin's price to highs not seen since April.

The electric-car maker now holds 42,902 bitcoin, according to Bitcoin Treasuries . It added $1.5 billion worth of the cryptocurrency to its balance sheet in February .

That investment is valued at $2.5 billion on Friday, after bitcoin climbed more than 3%, according to Coinbase data. The price of the token touched $60,000 but has since slipped back to $59,310 - still its highest level in five months.

This is not the first time Tesla's holding has added $1 billion in worth. Its fair value was almost $2.5 billion in March, the company said in an SEC filing . Overall, the value of Tesla's crypto investment has tracked the price moves for bitcoin since February.

The token has gained 23% over the past month on hopes the SEC will give the go-ahead for crypto exchange-traded funds. A report Friday that regulators are ready to allow bitcoin futures ETFs to trade next week has boosted the price.

Tesla has sold only 10% of its bitcoin , and that was only to find out whether it was as liquid as cash on a balance sheet, Musk said.

"Tesla will not be selling any bitcoin and we intend to use it for transactions as soon as mining transitions to more sustainable energy," its CEO Musk said in a tweet in May .

Musk is a crypto influencer whose comments have contributed to volatility in the price of dogecoin and shiba inu as well as bitcoin. The comment indicating Tesla had suspended vehicle purchases in bitcoin was followed by a drop in the token's price.

Elon Musk: CEO Is a ‘Made-Up Title,' So He's Tesla's ‘Technoking' Instead

Elon Musk is the CEO of two companies, Tesla and SpaceX — but if you ask him, his role as chief executive is essentially just "a made-up title." That's the somewhat philosophical reply Musk offered at The Wall Street Journal's CEO Council Summit on Monday, when asked whether he'd consider stepping into another role at Tesla in the coming years. The only consequential titles at a large company, Musk responded, are "president, secretary and treasurer," because those positions are required for Internal Revenue Service paperwork.
BUSINESS・19 HOURS AGO
Business Insider

Billionaire Tesla CEO Elon Musk believes death is critical to human progress. Death is "important," he said this week, because people rarely change their minds — "they just die." "If you live forever, we might become a very ossified society where new ideas cannot succeed," he said. When billionaire Elon...
ECONOMY・21 HOURS AGO
24/7 Wall St.

Reduced concern for the impact of the Omicron variant of the coronavirus lifted stocks higher on Monday. The effect appeared to be continuing in Tuesday's premarket trading.
STOCKS・22 HOURS AGO

Person
Elon Musk
The US Sun

A HI-TECH chip that's lodged into the brain could be implanted into a human for the first time next year, Elon Musk says. The billionaire's Neuralink firm has been working on a device that could allow those with physical disabilities to control a computer with their thoughts. But the Tesla...
ENGINEERING・20 HOURS AGO
Markets Insider

"The decline reflects a loss of intermediate-term momentum that serves as an impetus to reduce exposure to bitcoin and cryptocurrencies broadly."
MARKETS・22 HOURS AGO
Mercury News

Tesla Inc.’s Elon Musk spoke out in opposition to President Joe Biden’s signature economic package, questioning the need for legislation that would support electric-car adoption due to concerns government spending is out of control. “Honestly, I would just can this whole bill,” Tesla’s chief executive officer said late Monday, during...
FREMONT, CA・21 HOURS AGO
Markets Insider

Investors took advantage of a recent sell-off in stocks sparked by the emergence of the Omicron coronavirus variant by pushing nearly $7 billion into the market, moves that amounted to the largest inflows in four years, Bank of America said Tuesday. The investment bank tallied its clients dip-buying in stocks...
STOCKS・15 HOURS AGO

The US investment company filed for a metaverse-linked exchange traded fund on Tuesday as the virtual world expands.
STOCKS・1 HOUR AGO
Markets Insider

Buffett's Berkshire Hathaway conglomerate has more than quadrupled its money on Apple after plowing $36 billion into the stock.
BUSINESS・19 HOURS AGO
Markets Insider

More than half of US bitcoin holders first jumped into the crypto this year, Grayscale study finds

Bitcoin isn't seen by investors as money, but is increasingly viewed as "digital gold," a study by Grayscale Investments has found. Demand for the leading cryptocurrency surged in 2021, as interest grew despite the token's typical price volatility, the crypto firm said. Grayscale's research arm surveyed 1,000 people in the...
MARKETS・20 HOURS AGO
GOBankingRates

In a very convoluted legal case to recently draw headlines, self-proclaimed Bitcoin inventor Craig Wright won part of a litigation on Dec. 6. This mixed ruling found that Wright was, in fact, not...
ECONOMY・15 HOURS AGO

Should investors set shares of Tesla on autopilot in their portfolios, or is it time to pump the brakes?
STOCKS・2 HOURS AGO
Markets Insider

Roblox has added $26 billion to its valuation since going public in March, making it worth more than brands like FedEx and Ferrari. An online-gaming platform that lets users design and interact in virtual worlds, Roblox has rallied 70% since its public debut. Much of those gains have come in the last month alone in which the shares have soared about 55%.
STOCKS・17 HOURS AGO
GOBankingRates

Billionaires: They're just like us. Or are they? Sure, they may be human, but much of the way billionaires live is nearly incomprehensible for the average person in the U.S., let alone the world. From...
AEROSPACE & DEFENSE・15 HOURS AGO
dailyhodl.com

Seven altcoins are surging after a surprise listing by top US crypto exchange Coinbase. In a new blog post, Coinbase says that 5 Ethereum tokens and 2 other altcoins will start trading on Coinbase Pro once appropriate liquidity conditions are met. Circuits of Value (COVAL) skyrocketed from $0.02 to $0.06...
STOCKS・18 HOURS AGO
MarketWatch

Microsoft is one of the world's largest companies, but investors do have concerns.
STOCKS・1 HOUR AGO
24/7 Wall St.

Here's a look at what the ARK Invest exchange-traded funds traded on December 7, 2021.
STOCKS・11 HOURS AGO
The Motley Fool

This tech company seeks to disrupt the real estate industry. Here's how it's doing.
STOCKS・38 MINUTES AGO