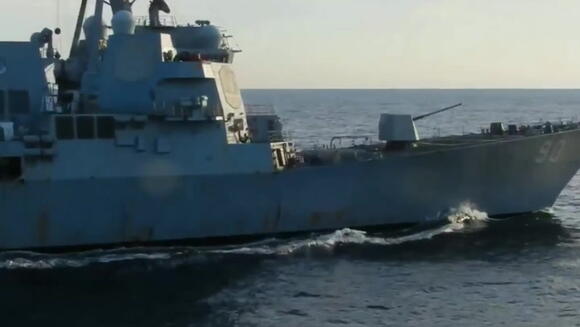 Russia accused the US Navy of attempting to enter its territorial waters during joint military drills with China in the Sea of Japan before it was “turned back”.

The Russian Defence Ministry released video footage it says showed the USS Chafee up close with anti-submarine vessel Admiral Tributs, which radioed a warning to the US destroyer that it was “in an area closed to navigation due to exercises with artillery fire,” according to the Interfax news agency, reported by Reuters .

The Russian defence ministry summoned the US military attache over the “unprofessional actions” of the USS Chafee, the RIA news agency reported.

A spokesperson for the US Navy’s Pacific Fleet told The Independent in a statement that Russia’s account of the interaction was "fasle".

"A Russian Udaloy-class destroyer came within approximately 65 yards of USS Chafee (DDG 90) while the ship was preparing for flight operations. The interaction was safe and professional," the statement said.

"Although Russia issued a Notice to Airman and Mariners in this area for later in the day, the NOTAM/NOTMAR was not in effect at the time of the interaction. At all times, USS Chafee conducted operations in accordance with international law and custom. The United States will continue to fly, sail, and operate where international law allows.”

The Russian state media agency Tass put out the Kremlin’s claim of the encounter, which said the USS Chafee was “turned back” at about 5.50 pm local time on Friday.

“The destroyer USS Chafee, convinced of the determination of the crew of the Russian ship not to violate the state border, changed direction,” the statement claimed.

According to Moscow’s version of events, the USS Chafee had maintained course and raised flags indicating the launch of a helicopter from its deck, making it unable to change course and speed, Reuters reported. The video released by the Russian government shows a helicopter with its rotors spinning at the back of the ship. 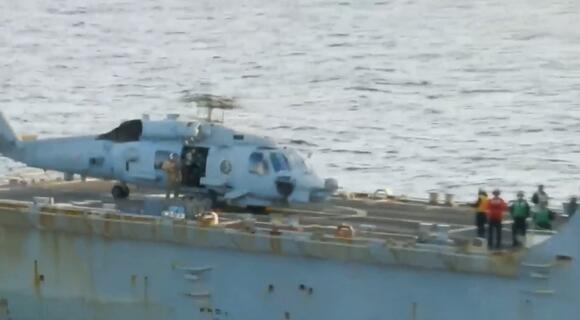 “Acting within the framework of the international rules of navigation, the Admiral Tributs set a course for ousting the intruder from Russian territorial waters,” Russia’s Defence ministry claimed.

The encounter was said to have lasted about 50 minutes in Peter the Great Bay, south of Vladivostok.

In June, Moscow claimed it forced the British destroyer, the HMS Defender, from the Black Sea near Crimea, which the UK and the international community maintain remain the territorial waters of Ukraine after Russia’s illegal annexation of the peninsula in 2014.

In an interview with the BBC, the Defender’s captain, Commander Vince Owen, said they deliberately sailed close to the Crimean coast in Ukraine’s international waters.

“With the UK and the Royal Navy, our deployment is here to maintain international order, and uphold that for the global peace and security,” Mr Owen told the BBC .

“The Royal Navy and UK will always call out states that do not follow international order,” he added. “That’s our mission.”

Amazing how many dumb comments that a simple article can generate from "Internet Warriors". These kinds of encounters have gone on since the late 1950's. please look up the "Incidence at Sea" agreement signed between USSR and USA. It's still in effect. Guarantee you the US Navy did not respond to any change of course directive by Russian ship. They maintained a flight ops course and speed to maintain proper winds over the deck to launch or recover the helo.

See how every country is pushing us to our limits because they know no balls Biden won’t do a dam thing about it. He’s a sad

He Has Made Our Military Weaker, Our Police Force Weaker Oh Yeah They Will Pounce Us Soon!! Man I Never Knew Red Dawn Would Be A True Story!!🤔🤔

Tokyo officials have asked the US military to investigate an incident in which an American fighter jet dropped a fuel tank that landed in a residential area. Suspicious metal objects were found in the coastal town of Fukaura, with a population of some 7,600 people, earlier this week. The debris, which landed in the center of the town, was later confirmed to be parts of an F-16 fuel tank.
AEROSPACE & DEFENSE・5 DAYS AGO
New York Post

The second-ranking general in the US military has sounded the alarm about China’s weapons development — warning that Beijing may soon have the capability to launch a surprise nuclear strike against America. “They look like a first-use weapon,” Gen. John Hyten, the vice chairman of the Joint Chiefs of Staff,...
MILITARY・19 DAYS AGO
realcleardefense.com

Russia has deployed its first regular unit of Terminator combat support tanks. The first Terminator company – equipped with nine BMPT-72s – was assigned to the 90th Guards Tank Division, which is stationed in the Sverdlovsk and Chelyabinsk areas of the Urals region in Central Russia, according to Russian news agency TASS.
MILITARY・2 DAYS AGO
Telegraph

War in space began on Sunday. Here's why the superpowers are on red alert

If a major superpower war were to erupt – and the drums have recently been beating both on the farthest reaches of eastern Europe as well as the South China Sea – then the new Pearl Harbour will not be on a naval or airbase (though these will be targeted, too), it will be in space.
AEROSPACE & DEFENSE・20 DAYS AGO

After getting stripped of its F-35s, Turkey wants to buy other US fighter jets, but it won't give up its new Russian weapons to do it

After getting kicked out of the F-35 program, Turkey says it wants to buy more US-made fighter jets. But Turkey refuses to yield on the issue that got it booted: Its purchase of Russian-made weaponry. That dispute is one of several that have strained relations between Ankara and its NATO...
MILITARY・12 DAYS AGO
The Independent

United States’ satellites are constantly under attack, and China may become the dominant space power by the end of the decade, according to a Space Force general.“The threats are really growing and expanding every single day. And it’s really an evolution of activity that’s been happening for a long time,” General David Thompson, the Space Force’s first vice chief of space operations, told the Washington Post.“We’re really at a point now where there’s a whole host of ways that our space systems can be threatened.”The United States must deal with “reversible attacks” on satellites – those which do not...
MILITARY・3 DAYS AGO
Fudzilla

Russia has billed the Checkmate as a light fighter, but that isn't really the case. Some four months since it was officially unveiled, another glut of promotional material has been released relating to the Sukhoi Checkmate ahead of its official foreign debut at the Dubai Airshow next week. Also known as the Light Tactical Aircraft, or LTS in Russian, what we've seen now reveals a fighter that’s substantially bigger than we might have imagined, at least in comparison to the Su-57 Felon. Seeing the two planes alongside each other provides our best view so far of the enigmatic Checkmate fighter project and evidence that this is really more of a medium fighter than a true light combat jet.
AEROSPACE & DEFENSE・23 DAYS AGO

Well, this was a rather frightening thing to wake up to this morning. GPS World reports:. The Kremlin warned it could blow up 32 GPS satellites with its new anti-satellite technology, ASAT, which it tested Nov. 15 on a retired Soviet Tselina-D satellite, according to numerous news reports. On the...
POLITICS・5 DAYS AGO
KTSA

While Biden’s military focuses on naming U.S navy ships after a gay rights leader and christened it by a transgender veteran, China’s military has built mockups in the shape of a U.S. aircraft carriers and other U.S. warships. For the last few months there has been a lot of concern about China attacking Taiwan, but are they also plotting an attack on the US? Lars talks about some disturbing new information that could mean just that, with Dr. Weifeng Zhong who is a Senior Research Fellow at the Mercatus Center at George Mason University.
FOREIGN POLICY・26 DAYS AGO
Esquire

This MiG Super Fighter Terrified NATO. Then a Soviet Pilot Stole One.

Throughout the early 1970s, the Soviet MiG-25 streaked through the nightmares of America’s military and intelligence communities. If the Cold War were to ever turn hot, they feared, this seemingly unstoppable fighter, code-named Foxbat, appeared poised to sweep the skies of Western aircraft. The first hints of the existence of...
AEROSPACE & DEFENSE・20 DAYS AGO
Business Insider

William J. Burns confronted the heads of Russia's security and intelligence agencies in Moscow but did not blame Russia, The Washington Post reported.
U.S. POLITICS・11 DAYS AGO
The Independent

Donald Trump predicts "something will happen" between Taiwan and China after the 2022 Beijing Winter Olympics while saying America is at "the lowest it has ever been". Speaking to Nigel Farage on GB News, the former president said: "There were no planes flying over Taiwan, you didn't talk about Taiwan when I was president.
SPORTS・5 DAYS AGO
Business Insider

US warships went on another mission to a European hotspot, and Putin says they're in Russia's 'crosshairs'

In early November, US Navy ships, including the Sixth Fleet's flagships, returned to the Black Sea. The visit is a sign of the US's increasing focus on the region, where NATO forces are spending more time. The increased military activity reflects the sea's strategic value amid tensions between NATO and...
MILITARY・19 DAYS AGO
Business Insider

The US Navy recently conducted joint exercises with allies and partners in the Pacific. The 7th Fleet commander said it was "an incredible amount of power" but added that more was needed for deterrence. "Four aircraft carriers is a good number, but six, seven or eight would be better," he...
MILITARY・3 DAYS AGO
Telegraph

An American nuclear artillery unit has been reactivated in Germany for the first time since the Cold War and is to be armed with new long-range hypersonic weapons. The US Army officially recommissioned the 56th Artillery Command in Germany this week during a ceremony in Mainz-Kastel, which hosts America’s Europe and Africa commands.
MILITARY・26 DAYS AGO
albuquerqueexpress.com

The US has been reportedly testing the Israeli-made Iron Dome air defense system on the Pacific island of Guam, which hosts the closest American military bases to China. The ongoing tests in Guam are scheduled to continue until December, the Wall Street Journal has reported, without expanding on how successful they've been.
AEROSPACE & DEFENSE・26 DAYS AGO
thedrive

The disclosure that Ukrainian troops have been employing Javelin missiles in combat comes as fears grow that Russian could launch a new invasion. Joseph Trevithick View Joseph Trevithick's Articles. The head of Ukraine's top military intelligence agency has confirmed, for what appears to be the first time, that Ukrainian troops...
MILITARY・13 DAYS AGO