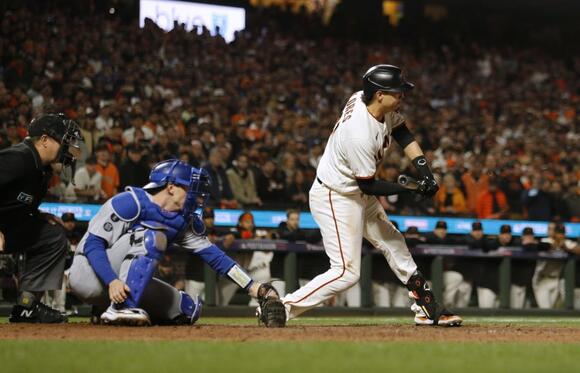 The Los Angeles Dodgers’ dramatic 2-1 victory over the San Francisco Giants in Game 5 of the National League Division Series ended on a controversial note Thursday night.

First base umpire Gabe Morales ruled that San Francisco’s Wilmer Flores was unable to check his swing, resulting in strike three for Flores and the end of the Giants’ season.

After the game in San Francisco, Giants fans expressed their displeasure with Morales and the rest of the umpiring crew by throwing cups of beer and other objects, according to NBC Sports Bay Area analyst Shawn Estes, a former pitcher for the Giants and others.

“We were in the tunnel going onto the field,” Estes said. “That’s where the umpires leave the field. It got a little ugly there with some of the fans hanging over the railing, throwing beer on the umpires. Wasn’t a great sight.” 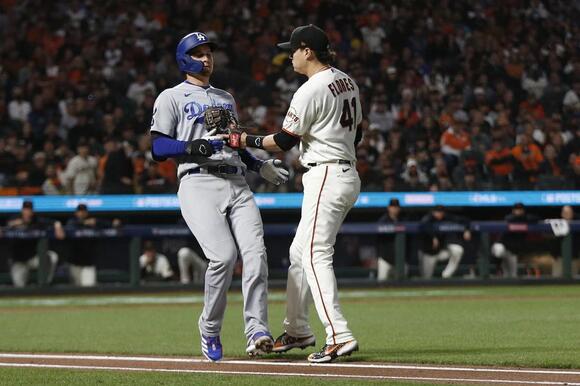 Morales was asked by a reporter if he felt differently about the call after reviewing the replay.

Giants manager Gabe Kapler took the high road when asked about the call, which came with the tying run at first base.

“Obviously you don’t want a game to end like that,” Kapler said. “These (umpires) work really hard to make the right calls. Obviously, it’s going to be frustrating to have a game end like that. Pretty high-quality batter at the plate who can climb back into the count. …

“But there are other reasons we didn’t win today’s baseball game. That was just the last call of the game.”

The defending World Series champion Dodgers face the Braves in Game 1 of the National League Championship Series on Saturday night in Atlanta.

Hall of Fame manager Joe Torre only spent three years at the helm with the Dodgers. In his first season, he was able to manage the team to their first NL Championship Series in 20 years. But apparently, a young lefty named Clayton Kershaw wasn't his biggest fan. Torre said in an interview this week ...
MLB・16 DAYS AGO
Dodgers Nation

After seven years with the Dodgers, Corey Seager is trading Dodger blue for a whole lot of green. A big, Texas-sized pile of green. Seager agreed to a 10-year, $325 million deal with the Texas Rangers on Wednesday, leaving LA in his rearview mirror. In the wake of Seager’s signing...
MLB・4 DAYS AGO
FanSided

The Dodgers lost Corey Seager to a monster free-agent deal with the Rangers and one of the deciding factors as to why he left LA has come to light. On Monday, the Texas Rangers signed former Los Angeles Dodgers infielder Corey Seager to a massive 10-year/$325 million contract. The front office and fans alike are sort of reeling and scratching their heads as to why/how they could lose out on Seager to the Rangers with Los Angeles being the second-largest market in the sport.
MLB・4 DAYS AGO
FanSided

After the Los Angeles Dodgers decided not to give Clayton Kershaw a qualifying offer, he’s now an unrestricted free agent. Who could sign Kershaw as a free agent?. With Clayton Kershaw officially entering into free agency, there’s a ton of interest around where the legendary pitcher could land. The Los Angeles Dodgers chose not to give their longtime star a qualifying offer and now Kershaw has the freedom to look around and find a new team if he so chooses.
MLB・19 DAYS AGO

The Los Angeles Dodgers could be gunning for a significant free-agent move this offseason. According to MLB Network insider Jon Heyman, multiple teams, including the Dodgers, are looking to “pry” superstar first baseman Freddie Freeman away from his World Series-winning Atlanta Braves squad. Yesterday, the Dodgers lost shortstop Corey Seager...
MLB・4 DAYS AGO
Larry Brown Sports

There is plenty of interest in the list of big-name free agent shortstops, but what about one of the teams at risk of losing one of those players?. The Los Angeles Dodgers may have an opening at shortstop, as Corey Seager is among the highly-touted free agents on the market. The Dodgers are trying to bring back Seager, according to Jon Heyman of MLB Network, but are not showing interest in any other shortstops.
NFL・12 DAYS AGO
FanSided

An MLB Network analyst eyes this former Dodger to replace Andrew McCutchen. When the Philadelphia Phillies declined the $15 million team option for fan-favorite outfielder Andrew McCutchen earlier this month — making him a free-agent — the left field position immediately became one of the biggest areas the organization has to address this offseason.
MLB・18 DAYS AGO
Inside The Dodgers

Last week, the NL Cy Young Award was announced and, sadly, it didn't go to any of the three deserving Dodgers starters. Julio Urias, who was the only pitcher in baseball to get twenty wins last season, finished eighth, while Max Scherzer and Walker Buehler finished third, and fourth ...
MLB・12 DAYS AGO

Let's face it, the Los Angeles Dodgers were dealt a huge blow on Monday. First it was the loss of Cy Young Award finalist and arguably the best pitcher on the staff last season in Max Scherzer. Scherzer agreed to sign a three-year, $130 million dollar contract with the New York Mets, making him the highest paid player by annual average value in MLB history.
MLB・4 DAYS AGO
Inside The Dodgers

Dodgers: Max Scherzer Could be Lured Away by Cardinals

Max Scherzer, one of the many Dodgers on the free-agent market this off-season, is drawing a lot of interest, and rightfully so. Acquired at last season's trade deadline, the right-hander had a 1.98 ERA over 68.1 innings pitched, winning all of his 11 starts in Dodger blue, proving he can still ...
MLB・6 DAYS AGO
ClutchPoints

Mark Berman, of Fox 26 Houston, got an inside scoop on who has reached out to Carlos Correa and his agent. According to Berman, Correa’s agent has heard from the New York Yankees, Boston Red Sox, Los Angeles Dodgers, Chicago Cubs, and the Atlanta Braves. It would make sense for...
MLB・2 DAYS AGO
Sportsnaut

As the 2021 season concludes, baseball fans and teams are excited for the exciting crop of MLB free agents who
NFL・2 DAYS AGO

Could he be going back to Cali?
MLB・1 DAY AGO
Inside The Dodgers

For the past seven years, Los Angeles has been Corey Seager's home. Now, after signing a huge deal with the Texas Rangers, 10 years $325 million, he's begun a new chapter in his life and will be joining Dodgers' former third-base coach Chris Woodward at Globe Life. With the Rangers signing a number ...
MLB・1 DAY AGO
Inside The Dodgers

The season has ended and the Dodgers are all scattered across the country enjoying the time off. But there is one former Dodger still working hard. Albert Pujols, a free agent who played for the Dodgers last season, is playing in the Dominican winter league. On Friday, he hit his first home run of ...
MLB・40 MINUTES AGO
Empire Sports Media

The New York Yankee family was saddened to learn of the passing of ex-Yankee manager Bill Virdon. Virdon was manager of the Yankees during 1974 and 1975 before being replaced in 1975 my the new manager Billy Martin. In 1974 he won 89 games for the Yankees. However, Virdon’s claim...
MLB・9 DAYS AGO
The Spun

Carlos Correa has made an official decision on his qualifying offer from the Houston Astros. Correa has declined the Astros’ $18.4 million qualifying offer, according to Jon Heyman. His days in Houston are over. The 27-year-old star is now the top free agent in baseball and is bound to receive...
MLB・19 DAYS AGO
Yardbarker

From 1995 to 2012, Chipper Jones was the face of the Braves, bringing the organization a World Series and an MVP award. It was a somber day for Braves fans when he finally hung it up, but Jones knew he was leaving the organization in good hands, passing the torch to Freddie Freeman, and it’s remarkable how similar their careers have been thus far.
MLB・24 DAYS AGO
FanSided

Free agent Freddie Freeman’s latest Instagram post sure sounded like goodbye to Atlanta Braves fans, even if it wasn’t. If this isn’t goodbye, then Freeman owes fans an explanation because…what the hell?. The greater likelihood is that Freeman is trying to thank Braves fans for a wonderful season, in which...
MLB・27 DAYS AGO