Dodgers-Giants Game 5 ended in controversial fashion. Here is how the baseball world reacted 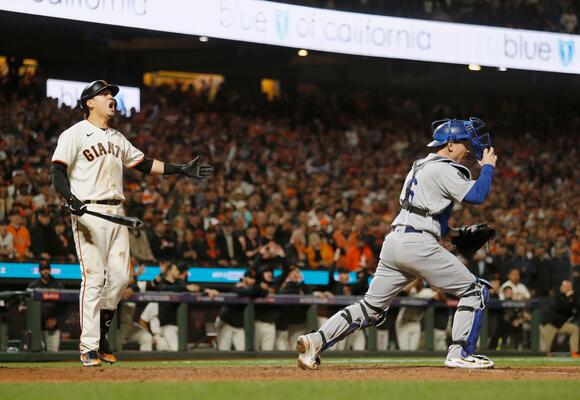 The National League Division Series between the San Francisco Giants and the Los Angeles Dodgers ended in controversial fashion .

The Giants won the NL West by one game and through the first four games of the series, each team had won once at home and once on the road, so it was no surprise a trip to the league championship series came down to the final batter.

With two outs and a runner on first base, Giants first baseman Wilmer Flores came to bat and found himself quickly facing an 0-2 count against three-time Cy Young winner Max Scherzer.

Scherzer threw an 86 miles per hour slider out of the strike zone and Flores checked his swing. The Dodgers asked first base umpire Gabe Morales for an appeal and Morales called Flores out ending the series.

The Giants had no recourse in the situation as the play is not reviewable.

Almost immediately the baseball world had an issue with the call.

Here is some of their reactions:

Dodgers manager Dave Roberts was asked about the check swing after the game.

"I'm trying to sell it as much as I possibly can. So it's baseball and, it's baseball, and ultimately we won a ball game," Roberts said.

The Dodgers move on to play the Atlanta Braves in a rematch of last season's NLCS, which Los Angeles won in seven games, coming back from a 3-1 series deficit.

This article originally appeared on USA TODAY: Dodgers-Giants Game 5 ended in controversial fashion. Here is how the baseball world reacted

After coming up short in this year’s playoffs, the Los Angeles Dodgers could be going back to their fundamentals: acquiring another big name. Bob Nightengale of USA Today Sports reported this week that the Dodgers are interested in former Cy Young candidate Sonny Gray, having engaged in trade talks with the Cincinnati Reds. Fellow Reds starter Luis Castillo was also included in those discussions, Nightengale adds.
MLB・20 DAYS AGO
Inside The Dodgers

Hall of Fame manager Joe Torre only spent three years at the helm with the Dodgers. In his first season, he was able to manage the team to their first NL Championship Series in 20 years. But apparently, a young lefty named Clayton Kershaw wasn't his biggest fan. Torre said in an interview this week ...
MLB・17 DAYS AGO
FanSided

The Dodgers lost Corey Seager to a monster free-agent deal with the Rangers and one of the deciding factors as to why he left LA has come to light. On Monday, the Texas Rangers signed former Los Angeles Dodgers infielder Corey Seager to a massive 10-year/$325 million contract. The front office and fans alike are sort of reeling and scratching their heads as to why/how they could lose out on Seager to the Rangers with Los Angeles being the second-largest market in the sport.
MLB・4 DAYS AGO
The Spun

The Los Angeles Dodgers could be gunning for a significant free-agent move this offseason. According to MLB Network insider Jon Heyman, multiple teams, including the Dodgers, are looking to “pry” superstar first baseman Freddie Freeman away from his World Series-winning Atlanta Braves squad. Yesterday, the Dodgers lost shortstop Corey Seager...
MLB・4 DAYS AGO

After seven years with the Dodgers, Corey Seager is trading Dodger blue for a whole lot of green. A big, Texas-sized pile of green. Seager agreed to a 10-year, $325 million deal with the Texas Rangers on Wednesday, leaving LA in his rearview mirror. In the wake of Seager’s signing...
MLB・4 DAYS AGO
NBC Los Angeles

Let's face it, the Los Angeles Dodgers were dealt a huge blow on Monday. First it was the loss of Cy Young Award finalist and arguably the best pitcher on the staff last season in Max Scherzer. Scherzer agreed to sign a three-year, $130 million dollar contract with the New York Mets, making him the highest paid player by annual average value in MLB history.
MLB・5 DAYS AGO
Larry Brown Sports

There is plenty of interest in the list of big-name free agent shortstops, but what about one of the teams at risk of losing one of those players?. The Los Angeles Dodgers may have an opening at shortstop, as Corey Seager is among the highly-touted free agents on the market. The Dodgers are trying to bring back Seager, according to Jon Heyman of MLB Network, but are not showing interest in any other shortstops.
NFL・12 DAYS AGO
Inside The Dodgers

Last week, the NL Cy Young Award was announced and, sadly, it didn't go to any of the three deserving Dodgers starters. Julio Urias, who was the only pitcher in baseball to get twenty wins last season, finished eighth, while Max Scherzer and Walker Buehler finished third, and fourth ...
MLB・12 DAYS AGO

After the Los Angeles Dodgers decided not to give Clayton Kershaw a qualifying offer, he’s now an unrestricted free agent. Who could sign Kershaw as a free agent?. With Clayton Kershaw officially entering into free agency, there’s a ton of interest around where the legendary pitcher could land. The Los Angeles Dodgers chose not to give their longtime star a qualifying offer and now Kershaw has the freedom to look around and find a new team if he so chooses.
MLB・19 DAYS AGO
dailydodgers.com

Scroll down for video Bliss: Los Angeles Dodgers star right fielder Mookie Betts married longtime love Brianna Hammonds in a stunning beachside ceremony on Wednesday The high school sweethearts became engaged to be married earlier this year in January after 15 years of dating. The couple also have a two-year-old daughter named Kynlee together as the youngster was seen being carried down the aisle during the ceremony.
RELATIONSHIP ADVICE・2 DAYS AGO
ClutchPoints

Newly-signed New York Mets pitcher Max Scherzer spent half of a season with the Los Angeles Dodgers after arriving there via trade at the deadline. Seen as a great fit at the time of the trade, it turns out that things weren’t actually so rosy between Scherzer and the Dodgers. In fact, Scherzer blames the Dodgers for his bad postseason experience.
MLB・3 DAYS AGO
The Spun

It’s been a rough 24 hours for the Los Angeles Dodgers. Veteran ace Max Scherzer and star infielder Corey Seager – both free agents – signed elsewhere on Monday. Scherzer inked a record-breaking deal with the New York Mets while Seager scored a 10-year, $325 million contract with the Texas Rangers.
MLB・5 DAYS AGO

Mark Berman, of Fox 26 Houston, got an inside scoop on who has reached out to Carlos Correa and his agent. According to Berman, Correa’s agent has heard from the New York Yankees, Boston Red Sox, Los Angeles Dodgers, Chicago Cubs, and the Atlanta Braves. It would make sense for...
MLB・3 DAYS AGO
dailydodgers.com

With 17 seasons at the Major League level, there is one year that stands out to Hill — his 2017 season with the Dodgers. Of course, that year didn't end the way he and the team wanted, thanks in large part to the Houston Astros orchestrating a cheating scandal en route to winning the World Series. However, that doesn't mean the season was one to forget, as Hill pointed out during a recent appearance on the "The Rose Rotation": "I think that team in 2017 that we had was a tremendous team.
MLB・12 DAYS AGO
Inside The Dodgers

Could he be going back to Cali?
MLB・2 DAYS AGO
Dodgers Nation

The Dodgers have lost the offseason! Well, maybe not quite, but Monday sure was a drag, right? The MLB hot stove gobbled up ace right-hander Max Scherzer and star shortstop Corey Seager yesterday with both players leaving Los Angeles on massive deals. Along with our live stream audience, we react...
MLB・4 DAYS AGO
Dodgers Nation

This offseason marks the end of an era for the Dodgers. After 7 seasons in LA, Corey Seager inked a massive 10-year free agent deal to play for the Texas Rangers. The shortstop is absolutely leaving behind a legacy in blue. 2016 National League Rookie of the Year, two-time All-Star, NLCS and World Series MVPs, and a World Series champion.
MLB・17 HOURS AGO
Inside The Dodgers

For the past seven years, Los Angeles has been Corey Seager's home. Now, after signing a huge deal with the Texas Rangers, 10 years $325 million, he's begun a new chapter in his life and will be joining Dodgers' former third-base coach Chris Woodward at Globe Life. With the Rangers signing a number ...
MLB・2 DAYS AGO
Inside The Dodgers

The season has ended and the Dodgers are all scattered across the country enjoying the time off. But there is one former Dodger still working hard. Albert Pujols, a free agent who played for the Dodgers last season, is playing in the Dominican winter league. On Friday, he hit his first home run of ...
MLB・8 HOURS AGO