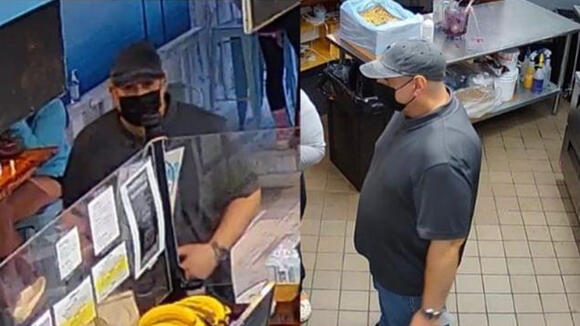 Authorities in Westchester County are searching for a man who allegedly impersonated a fire chief. The man walked into a business in Rye and told the workers he was there the chief and there to do an inspection. It happened at Playa Bowls on Purdy Avenue on Friday, October 8. ALSO READ | Teen girl shot in head in Brooklyn park released from hospital

It was shortly before closing when the man walked in and asked the employee to call her boss, owner Jarrod Jackette, whom he told he was doing a pre-inspection. "He was talking really fast, and I was like, 'So, wait, you're not,' he's like, 'No, I was just walking through. I'll be back next Wednesday at 2 o'clock,'" Jackett said. "I was like, "Fine, I'll see you then.'" After a brief walkthrough, the man wrote up two phony receipts and told the worker the owner said it was OK for her to pay him now. She then counted out $500 from the register and handed it over. "He wrote up receipts for things," Jackette said. "I could see where she thought it was legitimate. And then she called me back like an hour later. She was like, 'Something doesn't feel right. It seemed weird.'" It was then that she told him about the payout. "She was like, 'I gave him $500,' and I was like, 'What are you talking about?'" he said. "She was like, 'Yeah, he said you said it was OK that I could pay these receipts now.' I was like, 'That's fraud...Just call the police, have them come over.'" ALSO READ | What Gabby Petito's death by strangulation could mean for Brian Laundrie's case

The man does not work for the City of Rye Fire Department, and police want to find out who he really is. The store, which sells smoothies and fruit bowls, opened in March and has already dealt with scammers posing as a Con Edison worker and an exterminator. "It's something everybody should be looking out for, because it's very difficult," Jackette said. "Things are happening quickly, and maybe you're not used to this, you could easily fall prey to it." Anyone with information is asked to call Rye Detectives at 914-967-1234. ---------- * More Northern Suburbs news * Send us a news tip * Download the abc7NY app for breaking news alerts * Follow us on YouTube

Two MTA workers were honored by the transit authority on Tuesday for their actions during an emergency service delay.
MANHATTAN, NY・17 HOURS AGO
ABCNY

The flames started in the Dragon One restaurant before spreading to a neighboring restaurant and up through the five-story apartment building above.
UPPER EAST SIDE, NY・21 HOURS AGO
ABCNY

After days of searching, Gary and Lorraine Parker's bodies were found by the police department's drone in a densely wooded area.
STAFFORD TOWNSHIP, NJ・17 HOURS AGO
ABCNY

A video was posted on Snapchat showing the two students inside Platt High School in Meriden, north of New Haven.
3 HOURS AGO

The longer shifts are intended to assure adequate staffing. 73% of workers are vaccinated.
NEW YORK CITY, NY・1 DAY AGO
ABCNY

Verlon Thomas, 36, is accused of ordering the girl to get into his car Monday afternoon in East New York.
BROOKLYN, NY・3 HOURS AGO

They are accused of slapping a 3-year-old boy across the face last Friday. Police say the women approached an 18-year-old girl Sunday and pulled her to the ground.
BROOKLYN, NY・10 HOURS AGO
ABCNY

Half a dozen firefighters are recovering from smoke inhalation after battling a stubborn fire that broke out Sunday afternoon at an indoor gun range in Rockland County.
1 DAY AGO
ABCNY

Those in-school vaccination clinics were so popular during the first round earlier this month, the city decided to bring them back to hundreds of schools.
NEW YORK CITY, NY・16 HOURS AGO
ABCNY

Investigators say one of the men shot an 18-year-old store clerk in the head during a confrontation inside the M&M Grocery.
BROOKLYN, NY・10 HOURS AGO

Passaic police say that they have identified Ernest Fuentes as one of the gunmen and have issued a warrant for his arrest.
PASSAIC, NJ・2 HOURS AGO
ABCNY

Officers pulled over the BMW SUV on Cozine and Pennsylvania avenues at around 3:30 a.m. Wednesday.
BROOKLYN, NY・1 HOUR AGO
ABCNY

Robert Brennan installed as 8th bishop of the Diocese of Brooklyn

Porter revealed her future plans exactly one month before the end of the de Blasio administration, when many top city officials are expected to exit.
BRONX, NY・2 HOURS AGO
ABCNY

Suffolk County Police say someone detonated an explosive device on Fox Island in the Great South Bay, leaving a huge crater in the beach.
SUFFOLK COUNTY, NY・2 DAYS AGO
ABCNY

Footage shows a man wearing an NYPD sweatshirt with a badge hanging around his neck push his way inside.
BRONX, NY・1 DAY AGO