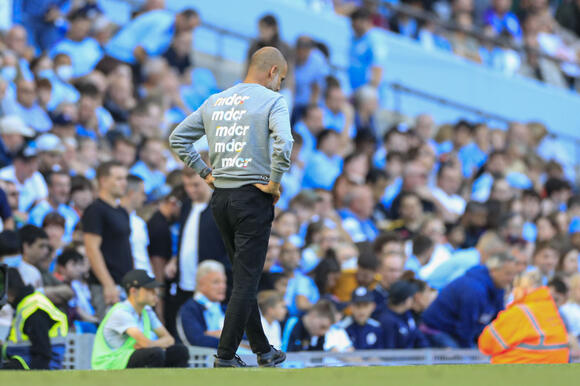 The ongoing issues with the Premier League's South American stars and their trips back home for World Cup qualifiers is creating more problems than anticipated for the league's managers.

With many of the countries red-listed for the UK, some players have had to quarantine for significant periods of time before returning to their respective clubs.

In City's case, the club's Brazilian stars, Ederson and Gabriel Jesus, featured against Uruguay in South America on Thursday night - only 48 hours before the Blues face-off with Burnley at the Etihad Stadium.

The late return for the pair has prompted fears that the squad could be without two of their key players - and those fears have been realized.

"No, (they won't play), they played overnight," said City boss Pep Guardiola on Ederson and Jesus in his pre-match press-conference on Friday.

USMNT goalkeeper Zack Steffen will likely step into the net for Saturday's game against Sean Dyche's side, and while City have reasonable strength in their attacking positions to cope with Jesus' absence, Guardiola will not want the situation to become a monthly event.

To make matters worse, Spain international Ferran Torres picked up a foot injury on international duty, causing the number of City's international break casualties to continue to rise, which is becoming a common theme for the Premier League champions.

Thankfully for Guardiola, he will have his Brazilian stars back in action for City's trip to Belgium for their upcoming Champions League tie with Club Brugge on Tuesday evening.

Manchester City manager Pep Guardiola has all but ruled out ever taking charge of another club in England The Spaniard is contracted at the Etihad Stadium until 2023 and could extend that, but expects to work elsewhere at some point in the future.Although he has expressed an interest in international football, the 50-year-old admits he has no clear vision of where his long-term future lies.I don't think I am going to train another club in England. I'm a part of this club.Pep GuardiolaOne thing he is sure about, however, is that he cannot see himself being employed by another Premier...
PREMIER LEAGUE・4 DAYS AGO
CityXtra

The Premier League champions can seal qualification to the knock-out stages of the Champions League if they win against the Ligue 1 side in mid-week. Manchester City manager Pep Guardiola will definitely be without Kevin De Bruyne for Wednesday’s decisive clash, after the Belgium international tested positive for COVID-19 following his return from international duty last week.
PREMIER LEAGUE・9 DAYS AGO
The Independent

Pep Guardiola felt Raheem Sterling delivered a timely reminder of his abilities after scoring in Manchester City’s convincing 3-0 win over Everton on Sunday.The England forward grabbed the opening goal in what proved a comfortable afternoon’s work for the champions at the Etihad Stadium.It was the 26-year-old’s first strike in the Premier League since August in what has been a frustrating start to the season at club level.Sterling has been unable to command a regular starting spot and, with his contract to expire at the end of next season, there has been speculation about his future.City boss Guardiola said: “He...
PREMIER LEAGUE・11 DAYS AGO
SkySports

Manchester City manager Pep Guardiola says midfielder Kevin De Bruyne has tested positive for Covid-19 and is self-isolating. De Bruyne, who will miss City's trip to Everton on Sunday, returned a positive test during the international break after playing in both of Belgium's World Cup qualifiers against Estonia and Wales.
PREMIER LEAGUE・13 DAYS AGO

The latest piece of information follows on from previous reports surrounding Barcelona and Manchester City throughout Friday, with the earliest story concerning the Camp Nou club's Director of Football and a trip to the Premier League champions' offices. While many assumed that the topic of the meeting between the relevant...
PREMIER LEAGUE・6 DAYS AGO
CityXtra

Pep Guardiola's side inflicted a third defeat on the Ligue 1 side in the calendar year, as goals from Raheem Sterling and Gabriel Jesus sealed the points for the hosts after Kylian Mbappe's strike had given PSG the lead. Manchester City have now clinched top spot in Group A following...
PREMIER LEAGUE・7 DAYS AGO
ClutchPoints

Man City coach Pep Guardiola admitted we may never see the achievements of Lionel Messi and Cristiano Ronaldo be replicated. Speaking to reporters before his side’s Champions League matchup against Messi and PSG, Guardiola said:. “I don’t imagine [it will happen] as what these two guys have done will be...
PREMIER LEAGUE・8 DAYS AGO
FanSided

Manchester City forward Raheem Sterling has seen a major drop in minutes this term largely due to the arrival of Jack Grealish from Aston Villa in the recent summer window. As a result, it has created problems for City’s no.7 as he has had to lose his place on the starting side and now, is open to an exit from the Etihad this season.
PREMIER LEAGUE・14 DAYS AGO

"I Still Have the Feeling He Can Do Better!" - Man City Boss Pep Guardiola Opens Up on Star Defender's Current Form

Much has been made of the scintillating form of Manchester City full-back Joao Cancelo this season. The 27-year-old has cemented himself as one of Europe's top players in the position, despite often playing at left-back, while being a natural right-back. The Portuguese international has displayed world-class attacking ability from the...
PREMIER LEAGUE・13 DAYS AGO
CityXtra

Guardiola, who joined Manchester City from Bayern Munich in 2016, has won ten pieces of silverware, including three Premier League titles, since taking over from Manuel Pellegrini at the Etihad Stadium. The 50-year-old has twice extended his contract since joining the Sky Blues, with his latest deal due to expire...
PREMIER LEAGUE・9 DAYS AGO
Yardbarker

The Sky Blues, currently situated in second place in the league table, will be looking to push leaders Chelsea with a victory over Everton at the Etihad Stadium at the weekend. City's clash against the Toffees is the first of eleven matches before the end of the year, with a...
PREMIER LEAGUE・13 DAYS AGO
CityXtra

De Jong was linked with a move to the Etihad Stadium before his switch to Barcelona from Ajax in 2019, with Manchester City boss Pep Guardiola keen to add him to his ranks. Since his move to Spain, the Netherlands international has made more than 100 outings for Barcelona, establishing himself as a key player for the Blaugrana during what has been a difficult time on and off the pitch for the La Liga outfit.
PREMIER LEAGUE・14 DAYS AGO

In European football this season, there have not been many players who have rivalled Manchester City's Joao Cancelo for contributions at both ends of the pitch. The Portugal international has been in excellent form in the left-back role for Manchester City, establishing himself as one of the Premier League's most creative talents.
PREMIER LEAGUE・10 DAYS AGO
fourfourtwo.com

Manchester City boss Pep Guardiola claims Bernardo Silva is currently “undroppable”. The Portugal midfielder has enjoyed a fine start to the season after regaining his place in the Premier League champions’ side. The 27-year-old, who slipped down the pecking order last term, wanted to leave the club in the summer...
PREMIER LEAGUE・11 DAYS AGO
SkySports

Pep Guardiola interview: Man City boss on why he is a better manager than in his Barcelona days and the need for no more slips in this toughest of title races

As Xavi Hernandez prepares to take charge of Barcelona for the first time, his former midfield partner, manager and mentor is reflecting on his own special moment. "I remember I was nervous, I was anxious but I was confident," Pep Guardiola tells Sky Sports. He remembers the score too. "We...
PREMIER LEAGUE・12 DAYS AGO
FanSided

Manchester City are supported all-round the globe for their style of play, their ability to come up trumps in crunch situations, and especially their “never-say-die” attitude. The Club has triumphed a record three Premier League titles in its previous four stints and the count of Carabao Cups is astonishingly second...
PREMIER LEAGUE・12 DAYS AGO
FanSided

Manchester City could sign a striker in the January transfer window after missing out on Tottenham star Harry Kane in the past summer window. Tottenham chairman Daniel Levy stayed firm on his stance of not selling Kane to the club’s direct Premier League rival, which led to a deal not happening even after the Sky Blues tried until the final week of the summer transfer window.
PREMIER LEAGUE・12 DAYS AGO
CityXtra

The Sky Blues returned to second place in the table with another win against the Toffees, following Liverpool's 4-0 thrashing of Arsenal and Chelsea's 3-0 win away at Leicester on Saturday. With Jack Grealish out injured and Kevin De Bruyne sidelined after testing positive for COVID-19 last week, Pep Guardiola...
PREMIER LEAGUE・10 DAYS AGO
CityXtra

The Premier League champions reduced the gap at the top of the top-flight table to just three points, with a convincing victory over Rafael Benitez's Everton side at the Etihad Stadium. Goals from Raheem Sterling, Rodri and Bernardo Silva ensured all three points for the hosts, who now face a...
PREMIER LEAGUE・10 DAYS AGO
BBC

Manchester City manager Pep Guardiola says his side waited for the "right moment" to open the scoring and had a "really good performance" during their 3-0 win against Everton. Watch highlights of all of Sunday's Premier League action on Match of the Day 2 at 22:30 GMT on BBC One, iPlayer and the BBC Sport App.
PREMIER LEAGUE・11 DAYS AGO