The treacherous housing market will continue through 2022 as prices surge further, Goldman says 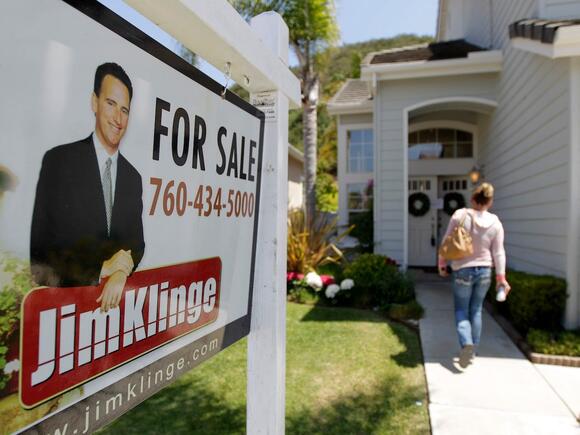 Goldman Sachs has some mixed news for US homebuyers who have struggled with a white-hot housing market all year.

The good news: Prices won't surge as much next year as they have in 2021. The bad news: They're still going to go up a lot.

Prices for US homes will climb another 16% through 2022, Goldman economists led by Jan Hatzius said in a Monday note. The forecast gives prospective buyers little to cheer as the new year looms. Prices have already surged 20% through the past year, as a dire home shortage has given way to frenzied bidding wars. Builders have moderately accelerated construction of new houses, but they're far from hitting the pace needed to match demand.

The shortage will linger into next year, and it's uncertain whether the market will normalize then, the team said.

"Of all the shortages afflicting the US economy, the housing shortage might last the longest," they said. "While the supply of homes for sale has increased modestly since the spring, it remains well below pre-pandemic levels and the outlook offers no quick fixes for the shortage."

The mismatch between buyer demand and nationwide supply is the basis for the bank's expectation that prices will boom well into the 2020s.

On the supply side, builders can't ramp up construction even if they wanted to. Firms don't just face pandemic headwinds like supply shortages and delays, but pre-crisis problems like a lack of workers and land scarcity as well, the economists said.

Those obstacles will limit new home construction to roughly 1.65 million units per year, or a net increase of 1.4 million per year after demolitions, they added. That's only just above the pace seen in August, but well below the annual rate of 2 million homes the National Association of Realtors says is needed to fill the deficit caused by years of underbuilding.

On the other side of the equation, demand shows no signs of letting up. Millennials are in their peak buying age and they're set to power a once-in-a-lifetime boost to household formation . And while Americans' attitudes toward buying a home are at the lowest point since the 1980s , there are still plenty of "reluctant bulls" on the sidelines, the team said. These buyers plan to buy homes in the near future, even through their sentiments toward the market have soured.

With the market rife with reluctant bulls and struggling homebuilders, prices won't cool off for years, Goldman said.

Renters aren't safe, either. It just won't be as bad.

Much of the housing turmoil has already bled into the rental market . Prices have surged above their pre-pandemic highs in many cities, and in places where deals can still be had, they're expected to fade in a matter of months.

The bank expects that price surge to continue through 2022. Goldman sees shelter inflation rising to a year-over-year rate of 4.5% by the end of next year, a sharp acceleration from the current 2.4% pace and the fastest price growth in 20 years.

The forecast is concerning, especially since inflation already sits at decade-highs . The bank's shelter inflation tracker - which lumps a collection of alternative rent measures into a single forecast - has leaped from 2.1% to 4.6% in just six months.

There's reason to believe the actual increase won't be as steep as that measure suggests, the economists said. For example, some of the measures track private rent indexes, and those focus more on rents that turn over to new tenants instead of continuing leases. Landlords tend to raise rents more for new tenants than existing ones, and less than 5% of rentals turn over in a given month, Goldman said.

Separately, a wide range of cities and states also enacted rent freezes during the pandemic, and governments will likely regulate how fast rents can climb during reopening.

Housin is in the process of cooling off from its wild pace earlier this year. But those hoping for a quick return to the pre-crisis normal are set to be disappointed.

EQT says greed not a factor in commodity price surge

The US company added that LNG has an integral role in the energy transition. US energy company EQT said December 7 it disagreed with the position of a leading US senator that oil and gas companies were tacitly supporting higher commodity prices. US senator Elizabeth Warren, a Democrat representing Massachusetts,...
ENERGY INDUSTRY・17 HOURS AGO
The Motley Fool

The self-storage industry outperformed all other commercial sectors in 2021. Will this momentum continue in 2022? Here's what investors should expect.
REAL ESTATE・6 HOURS AGO
BBC

House prices in the UK grew at the fastest pace in 15 years over the past three months, the Halifax has said. House prices rose 3.4% in the three months to the end of November, the sharpest increase since late 2006, and are 8.2% higher than a year earlier. The...
BUSINESS・11 HOURS AGO
Reuters

BENGALURU, Dec 7 (Reuters) - The rise in U.S. house prices will slow to half its double-digit rate next year but still outstrip increases in consumer prices and wages, according to a Reuters poll of property analysts, who said affordability would worsen over the next two to three years. Often...
REAL ESTATE・21 HOURS AGO

American housing inventory is officially at crisis level, according to a new report. Redfin revealed this week that the number of active listings in the U.S. housing market hit an all time low on November 28, down a whopping 23% from the same period one year ago. What’s more, active...
REAL ESTATE・1 DAY AGO

BofA said investors during the Omicron sell-off purchased stocks in eight of the S&P 500's 11 sectors, led by tech names.
STOCKS・1 HOUR AGO
The Motley Fool

Will Industrial Real Estate Stay On Top in 2022?

Industrial REITs outperformed all other REIT sectors by over double in 2021 -- will this trend continue in 2022?
REAL ESTATE・1 DAY AGO
worldpropertyjournal.com

It's a Gut Punch to American Home Buyers and Home Builders, says NAHB. The National Association of Home Builders chairman Chuck Fowke issued the following statement after the U.S. Commerce moved forward last week with an administrative review to double the tariffs on Canadian lumber shipments into the U.S. from 9 percent to 17.9 percent:
BUSINESS・1 DAY AGO
Markets Insider

Bitcoin is back above $50,000 as crypto investors recover from the weekend rout, while metaverse tokens are soaring

Bitcoin rose above $50,000 on Tuesday, as investors jumped in after the coin's dive at the weekend to two-month lows.
BUSINESS・9 HOURS AGO

Here's where mortgage rates are sitting today. Should you apply?
REAL ESTATE・8 HOURS AGO
The Motley Fool

6 Real Estate Trends to Watch Out for Next Month

Buying or selling a home soon? Expect these real estate trends to impact your decision.
REAL ESTATE・8 HOURS AGO
MarketWatch

Treasury yields edged up Tuesday, extending a steady rise in rates, as the pandemic-sparked anxieties that led to buying in U.S. government bonds ease.
ECONOMY・1 HOUR AGO
FOXBusiness

Prices at the gas pump have dipped once again, and they're likely to drop even more, according to an industry expert. Currently, the average price of a gallon of regular gasoline in the U.S. is $3.347, Patrick De Haan, head of petroleum analysis for GasBuddy, told FOX Business. On Sunday,...
TRAFFIC・1 DAY AGO
Motley Fool

Housing Supply and Demand in 2022: What to Expect

Supply constraints and labor shortages could hinder the supply of homes in 2022. However, inflation, rising interest rates, and expensive home prices may cool demand. You’re reading a free article with opinions that may differ from The Motley Fool’s Premium Investing Services. Become a Motley Fool member today to get instant access to our top analyst recommendations, in-depth research, investing resources, and more. Learn More.
BUSINESS・8 HOURS AGO
MarketWatch

U.S. consumer credit increased $16.9 billion in October, down from a $27.8 billion gain in September, according to Federal Reserve data released Tuesday. Economists had been expecting a $25 billion gain, according to the Wall Street Journal forecast. That's an annual growth rate of 4.7% in October, down from a 7.7% gain in the prior month. Revolving credit, like credit cards, rose 7.8% after an 11.7% gain in September. Nonrevolving credit, typically auto and student loans, rose 3.7% after a 6.5% growth rate in the prior month. This category of credit is much less volatile. It fell briefly at the start of the pandemic before returning to steady growth, although more recently, it has been depressed by the lack of supply of new cars. The data does not include mortgage loans, which is the largest category of household debt.
PERSONAL FINANCE・2 HOURS AGO
The Motley Fool

4 Cities That Should Be Hot Real Estate Markets in 2022

This Fab Four has the right mix of residential and business growth to keep sizzle going into next year.
REAL ESTATE・5 HOURS AGO
Markets Insider

Goldman Sachs cut its 2022 US GDP growth outlook on Sunday due to risks posed by the Omicron variant. The bank now sees annual US GDP growth for 2022 at 3.8%, lower than a prior estimate of 4.2%. This latest variant could further deteriorate the goods supply shortage if other...
BUSINESS・1 DAY AGO