Adele releases new single ‘Easy on Me’ from upcoming album ‘30′ 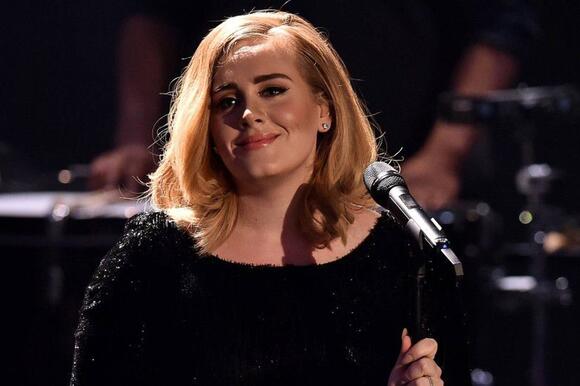 Adele has released her first single from her upcoming album, “30.”

According to Entertainment Weekly and USA Today, the Grammy Award-winning singer dropped her long-awaited new song, “Easy on Me,” along with a music video on Friday. The heartbreaking ballad, which focuses on giving up on a failed relationship, is available via major streaming services and music sellers.

The release comes just over a month before the 33-year-old’s first album since 2015 is slated to hit stores Nov. 19.

In a statement, Adele, who filed for divorce from ex-husband Simon Konecki in 2019, said she’s “learned a lot of blistering home truths” since she began working on “30″ three years ago.

“I’ve shed many layers but also wrapped myself in new ones,” the statement read. “Discovered genuinely useful and wholesome mentalities to lead with, and I feel like I’ve finally found my feeling again. I’d go as far as to say that I’ve never felt more peaceful in my life. And so, I’m ready to finally put this album out.”

Chris Stapleton joins Adele for a new version of her single "Easy on Me" that she hopes will hit at country radio. The "Cold" singer's vocals are the only change between versions of the song from 30. It's an understatement to say that the floor is high for a collaboration...
MUSIC・14 DAYS AGO
The Tab

Look, there’s no such thing as a bad Adele album. She could be singing Swagger Jagger by Cher Lloyd and her rich, trademark vocals would elevate it to Grammy standard. Our own Adele Adkins is the best thing this cursed island has produced in our lifetime – and she’s soundtracked the last decade and a half with ease. Charming, down to earth, funny and humble despite being the biggest star in the world, Adele appeals to all with her timeless sound. The fact she vanishes off the face of the earth between album cycles only adds to her mystique. But which of the four Adele albums deserves to be ranked the best?
MUSIC・14 DAYS AGO
theadvocate.com

Watch: Southern's Human Jukebox blasts 'Easy on Me,' gets shoutout from Adele

Southern Univerisity's Human Jukebox marching band is sweeping the internet — again — with a performance of Adele's "Easy on Me." The band posted its rendition of the song, performed during the Bayou Classic in New Orleans, on Twitter. Adele, who is one of the most popular musical artists in...
NEW ORLEANS, LA・9 DAYS AGO

The last time we heard new music from Adele was in 2015 when her album “25” was released. Ever since, fans have been anticipating a new album over the last six years. On Nov. 19, her new album “30” was dropped, and many songs have already reached the top 100.
MUSIC・9 DAYS AGO
younghollywood.com

(Jon Castillo/TikTok/@joncast1) Adele’s epic new album 30 is finally out, and the entire Internet is buzzing and feeling it from each of her songs on the album! Many fans have vented their emotions and reactions on TikTok, and, if we must say, they are all pretty priceless!. TikTok user @Sainthoax...
BEHIND VIRAL VIDEOS・11 DAYS AGO
gratefulweb.com

AV. announces the upcoming release of her second single "Our Ghosts"

Written in 2019, “Our Ghosts” is AV.’s second single off of her debut EP called “Guess I’m A Ghost”, which will be released in spring of 2022. This is one of the first songs that was written for the record. In this song, AV. describes a relationship filled with miscommunication and lack of trust. As the chorus says, “Even when you cut me blood to bone, you always seem to bring me back home, captivated by you even so, it’s just another one of our ghosts.” In other words, AV. is saying that even when someone hurts you and it makes you drawn to them more, it's just another reason why you need to get away.
MUSIC・6 DAYS AGO
Billboard

"Easy on Me" is the first song to lead simultaneously in airplay, streaming and sales since "Despacito" in 2017. As Adele‘s new LP 30 blasts in at No. 1 on the Billboard 200 albums chart with the biggest week of 2021, lead single “Easy on Me” rebounds for a fifth week atop the Billboard Hot 100 songs chart.
MUSIC・8 DAYS AGO

Adele’s Easy On Me is battling for a seventh week at Number 1. Last week, it became her longest-running UK chart-topping single, overtaking Someone Like You and in our First Look update, Easy On Me looks set for another week at the top - its nearest competition is naturally Adele herself with I Drink Wine, which could vault two places to a new peak of Number 2.
CELEBRITIES・10 DAYS AGO
104.1 WIKY

Following the resounding success of her best-selling album 30﻿, Adele‘s “Easy On Me” has recaptured the number one spot on the Billboard Hot 100. Not only that, a new song of hers has debuted in the top five — “Oh My God,” which is in fifth place on the chart.
MUSIC・8 DAYS AGO
lancerfeed.press

On Oct. 15, 2021, the world was given the first song of Adele’s new era. After six years of silence, the multiple Grammy Award winning artist released Easy On Me, also announcing a new album was on the way. On Nov. 19, 2021 the long-awaited Adele album 30 was released, the first album by Adele since 25 in 2015.
MUSIC・8 DAYS AGO
insideradio.com

Where Do New Singles From Adele And Taylor Swift Fit At Country Radio?

Country radio, a format that rarely has an abundance of records by female stars, currently finds themselves with singles from two of the most popular female singers on the planet — Taylor Swift’s “I Bet You Think About Me” and Adele’s “Easy on Me.” Both feature the newly crowned CMA Male Vocalist of the Year, Chris Stapleton. How much of a future do the two records have at country radio? The jury’s still out – but it may not be for long. And while the two records have a lot of similarities, there are key differences, as well.
MUSIC・8 DAYS AGO

It’s a Cali link up as Blueface and BLXST combine for the new single and video “Chose Me.” The new release brings Blueface floating over BLXST’s production with luxurious bars. BLXST adds vocals in addition to the production, skating out “Something told me, I didn’t chose this lifestyle, it just...
MUSIC・11 DAYS AGO
dailytitan.com

Six years after her last album release, Adele has returned with her fourth studio album “30,” where the artist finds herself as a woman, mother and overall person after divorcing the father of her child. The album features 12 tracks that highlight her experience dealing with and healing from divorce....
THEATER & DANCE・6 DAYS AGO
WHAS 11

Jennifer Lopez is tugging at the heart strings again, this time with her "On My Way" music video. Lopez on Thursday night dropped the video to her single from her upcoming rom-com Marry Me, starring Owen Wilson and GRAMMY-nominated superstar Maluma. After the video dropped, Lopez took to Instagram to inform her millions of fans about it, saying, "I'm so happy you're all loving the song and I hope you love the video as much as I do."
CELEBRITIES・5 DAYS AGO
allkpop.com

ENHYPEN will be back soon. According to media reports on December 6th, ENHYPEN will be releasing a new album in January 2022. The boys are currently working on fine-tuning the quality of the final product. This will mark their comeback in just 3 months since their first full album 'Dimension: Dilemma' this past October.
MUSIC・2 DAYS AGO
go955.com

Longtime Elton John guitarist Davey Johnstone will release his first solo album in nearly 50 years, Deeper than My Roots, on February 4. The project was a true family affair, as Johnstone’s youngest son, Elliott, sings lead vocals on most of the album, his son Charlie recorded many of the basic tracks at his home in California and contributed keyboard and backing vocals, and his son Jesse played drums on some of the songs.
MUSIC・4 DAYS AGO
Taos News

Mozart Gabriel on a new album, a Christmas single and TikTok

Mozart Gabriel (Taos Pueblo/Diné) released a new album entitled “Eager Within the Fire” on Nov. 26. The seven track pop punk and rock ’n roll album draws from Gabriel’s influences growing up such as Radiohead, Third Eye Blind and the Goo Goo Dolls. He said that most of the songs on the album were developed playing live on stage in Barcelona, Spain where he resided for almost three years. The album's title came from the "fire" he had inside to keep going back on the stage and how he was "eager" for more.
MUSIC・6 DAYS AGO
Emerald Media

Adele’s latest LP wouldn’t take it “Easy On Me”

Back in 2011 when Adele released her breakout album, “21,” I was 11 years old. I vaguely remember singing along to the hits, but what burns vivid in my brain is the way my mom loved — and I mean loved — that album. I didn’t quite get it. But, hey, I was 11.
CELEBRITIES・8 DAYS AGO
Billboard

Pop superstar Adele adds another genre to her Billboard chart résumé, as “Easy on Me,” with Chris Stapleton, enters the Country Airplay ranking (dated Nov. 27). The song starts at No. 25 with 5.4 million audience impressions, according to MRC Data. With the debut, Adele logs her first appearance on...
MUSIC・14 DAYS AGO