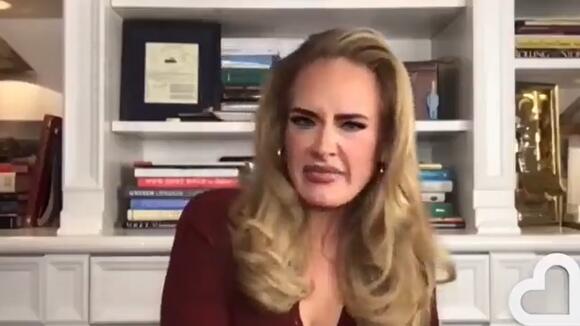 Two of the UK’s biggest stars, Adele and Ed Sheeran, are set to release their albums within weeks of each other, but Adele isn’t worried.

Adele’s new album, 30, will be released on 19 November — just weeks after Sheeran releases Equals on 29 October.

News of Adele’s new album has been met with much fanfare as it’s the first album from the Rolling in the Deep singer in six years.

After teasing fans with a snippet of her new song Easy on Me earlier this week, the song immediately became a fan-favourite upon its release.

Despite Sheeran’s album coming out just weeks before hers, Adele is unfazed.

While speaking to Heart radio, host Jamie Theakston revealed to Adele that Sheeran has an album “coming out at the same time”.

Adele laughed: “I ain’t panicking, he can panic”.

Theakston and co-host Amanda Holden giggled along, before Holden added: “She’s going to smash it.”

In a separate interview with Zoe Ball, Adele said the album was “bloody hard work” to make.

“I would sing things I didn’t even realise I was feeling or thinking,” she said.

“I can’t unlock a door for my mental health and take the key with me; I’ve got to leave it in the door for everyone else and I’m in a strong place now where I feel like I can put that vulnerability out.”

Ball replied: “Just you sharing a bit about the experience that you’ve been through will help so many other people.”

It seems Adele will have competition given Sheeran has dominated the charts since releasing Bad Habits and Shivers.

Meanwhile, in an Instagram post, Sheeran urged fans to support Elton John’s collaboration with Dua Lipa to get it to number one.

If their hit Cold Heart makes it to the top spot, it will be the Tiny Dancer singer’s first number one in 20 years.

Sheeran wrote: “Please go buy/stream/download Cold Heart with @dualipa now, 15 weeks at #1 was more than I ever expected anyway, love you all. Who doesn’t wanna be knocked off by Elton anyway.”

Regardless of what Adele, Sheeran, or Elton release — we’re pretty much guaranteed to love it.

TV host sinks '£500,000 interview' with Adele as he admits he has not listened to her album

An Australian TV host who flew from Sydney to London for an exclusive interview with Adele reportedly bungled the assignment by not listening to her new album beforehand. Channel 7’s Matt Doran arrived in London on 4 November for the interview, as part of a £500,000 deal between Sony and his network to screen Adele's recent One Night Only special, Oprah Winfrey interview, and other clips.
CELEBRITIES・14 DAYS AGO
Insider

The long-awaited collaboration between Ed Sheeran and Elton John has finally made its debut. Entitled ‘Merry Christmas,’ the video for the song also appeared alongside the debut of the song. In the clip, Sheeran and John can be seen singing around a piano with plenty of Christmas decorations adorning the background.
MUSIC・3 DAYS AGO
Insider

A TV host flew 10,000 miles for an exclusive interview with Adele, only to have it canceled after he said he hadn't listened to her new album

Matthew Doran, a TV host, told local media he missed an email with a link to Adele's new album. It was to be her only Australian album interview.
CELEBRITIES・14 DAYS AGO

Elton John and Ed Sheeran have joined forces with a newly-released festive single for charity – fittingly called Merry Christmas. Complete with every Christmas cliché imaginable and remakes of iconic festive scenes, the unexpected duo went down a treat with the British public. And now, bookies believe it stands a strong chance of becoming a number one chart-topper against Adele and LadBaby.
MUSIC・3 DAYS AGO
miamistudent.net

There are two different types of fans of musical artists: the die-hard fans (think clue-decoding Swifties) and the people who enjoy a person’s music and add a few of their songs to a playlist, but don’t download their new albums the instant they come out and obsessively listen to them on repeat.
MUSIC・13 DAYS AGO
Montclarion

Adele Brings the Waterworks With Her New Album, ‘ 30 ’

After a six-year hiatus, Adele, a sensational 15-time Grammy Award-winning artist, has returned with the debut of her fourth studio album “30,” released on Nov. 19. One thing is for sure: she did not take it “easy on us.”. This album includes a track list of 12 songs filled with...
CELEBRITIES・14 DAYS AGO
My 1053 WJLT

How Adele’s Fans Really Feel About Her New Album ’30’

Adele has returned to music for the first time in six years, and the superstar's fans couldn't be happier. On Friday (Nov. 19), the "Easy on Me" singer released her fourth studio album, 30. Featuring soaring power ballads, fans can't get enough of the music. Listeners on social media prepared with bottles of wine and boxes of tissue — and it turns out, they were quite necessary.
THEATER & DANCE・13 DAYS AGO

An Australian TV journalist was left red-faced during an exclusive interview with Adele when he told the singer he hadn’t heard her new album 30.Channel Seven’s Matt Doran, who hosts the breakfast show Weekend Sunrise, has since apologised to the singer, admitting to The Australian that he was “mortified and unequivocally apologetic” over the incident. Doran reportedly flew to London on 4 November, ahead of the 19 November release of 30, for an exclusive interview with the 33-year-old singer, as part of a A$1m (£539,065) package deal that included streaming rights to the CBS TV special Adele: One Night...
CELEBRITIES・14 DAYS AGO
musicinminnesota.com

Three days after its release, Adele’s fourth studio album, 30, is considered one of 2021’s best-selling albums. The record was so anticipated, Sony Music reportedly ordered around half a million vinyl copies, putting vinyl production on delay for other artists. For some, this comes as no surprise, as the English...
MUSIC・13 DAYS AGO
HipHopDX.com

South Korea’s Jessi and Sunmi team up with Ed Sheeran!. Two of K-pop’s female superstars put their own spin to singer-songwriter Ed Sheeran’s latest hit single, “Shivers,” from his latest album “=” Equals, which recently topped the Billboard Album Chart. The remake version was initially teased on November 19 with...
WORLD・12 DAYS AGO
Cosmopolitan

Adele Literally Got Spotify to Change How the App Works for the Release of Her New Album, '30'

Today in Very Powerful People Proving They're Very Powerful, Adele got Spotify to change how the app works in a very fundamental way. More specifically, in honor of the release of her new album, 30, Adele got Spotify to disable the shuffle feature as the default listening option for albums on the platform. Not just for her album, but for all albums on Spotify.
CELL PHONES・14 DAYS AGO

Ed Sheeran has been cooking up new music. This time around he is bringing his friend Elton John for the ride. Taking to social media, Sheeran announced that he has a new collaboration with John on the way called, ‘Merry Christmas.’ Sheeran shared the news with a festive new clip.
MUSIC・7 DAYS AGO
jack1065.com

After Ed Sheeran teased it a while back, we now have a release date for his holiday collaboration with Elton John: a song called “Merry Christmas.” The date is revealed in an adorable video inspired by everyone’s favorite British Christmas movie, Love, Actually. In the video, we see Elton answering...
MUSIC・7 DAYS AGO
Complex

Opening week numbers for Adele’s long-awaited fourth studio album album, 30, project the global superstar will deliver the biggest debut of the year. While Adele’s latest feat won’t rival that of its predecessor, 25, which set the all-time opening week record with 3.38 million copies sold, her new LP is expected to debut with 800-850K in equivalent album units (according to Hits Daily Double), earning the singer the biggest opening since Taylor Swift’s 2020 LP folklore. Hits Daily Double also notes that about 500K of total consumption comes from pure sales.
CELEBRITIES・13 DAYS AGO
Music Week

Adele has prompted Spotify to remove the shuffle button of all album pages so that they can be played in the order of the original tracklisting. The move by Spotify follows the release of Adele’s album, 30, on Friday (November 19). Adele posted on social media: “We don’t create albums...
MUSIC・14 DAYS AGO
Billboard

Ed Sheeran and Elton John are teaming up to give fans a new holiday song for their festive playlists. After teasing the release of Christmas music, the English musicians announced Monday (Nov. 29) that their new song “Merry Christmas” will be released on Friday. In addition, the duo revealed in a joint Instagram post that all U.K. profits from the song this holiday season will go to the Ed Sheeran Suffolk Music Foundation and the Elton John AIDS Foundation.
MUSIC・6 DAYS AGO
dailytitan.com

Six years after her last album release, Adele has returned with her fourth studio album “30,” where the artist finds herself as a woman, mother and overall person after divorcing the father of her child. The album features 12 tracks that highlight her experience dealing with and healing from divorce....
THEATER & DANCE・4 DAYS AGO
lariatnews.com

Many sweet, lovely moments are captured in Ed Sheeran’s forthcoming album “Equals.” Several years after releasing “Divide,” this one features many emotional ballads and catchy pop songs across 14 tracks. “Equals” brings sensibility to various themes like love, loss and parenthood, concocting a glimpse into the songwriter’s life. Unveiling vulnerability...
MUSIC・4 DAYS AGO
Popculture

Adele made a major announcement for fans excited to see her perform her new songs from 30 on Tuesday. The "Easy on Me" singer announced a Las Vegas residency at the Colosseum at Caesars Palace Hotel. The weekend concerts will start on Jan. 21, 2022, and tickets will go on sale next week, but fans have to register first.
CELEBRITIES・6 DAYS AGO