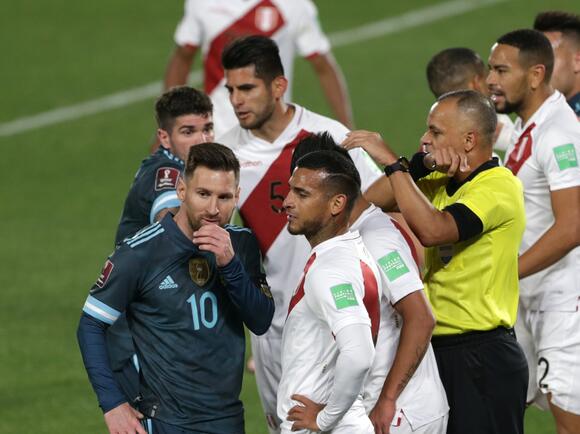 The Albiceleste squeezed past Peru in the World Cup qualifier on the road to Qatar 2022 thanks to a goal from Lautaro Martinez .

But the Paris Saint-Germain superstar was upset at a number of contentious decisions made by Sampaio, which the 33-year-old insists were made “on purpose”.

“Difficult match, difficult to play. A lot of wind, they were playing deep, leaving little space for us,” Messi said.

“The referee always does this when he referees us, as if he does it on purpose. But well, three important points and we’re close to our objective.”

Messi will now return to club action, with Mauricio Pochettino’s side taking on Angers on Saturday night before hosting Leipzig in the Champions League on Tuesday.

While Lionel Scaloni was thrilled after extending Argentina’s unbeaten record to 25 games, a run only matched once previously in the country’s history by Alfio Basile.

And Scaloni insists there is more to come from the Copa America 2021 winners.

“We took it forward and got the three points, which is what we wanted.

“It was a very important game and there was tension for that. I do not think that Argentina was satisfied with the result.

“Peru played well, they are a very difficult opponent. Apart from the penalty incident, I think we controlled the game.”

Cristiano Ronaldo has hit out at an “unacceptable lie” being told about him, in relation to Lionel Messi’s Ballon d’Or win on Monday night. Messi won his seventh Ballon d’Or, an incredible achievement, while Ronaldo finished in sixth place. The little Argentine saw off competition from Bayern Munich striker Robert...
PREMIER LEAGUE・5 DAYS AGO
SPORTbible

Lionel Messi and Cristiano Ronaldo's dominance over the Ballon d'Or has seen the duo win a combined total of 12 awards between them in the last 13 years. Only Luka Modric was able to upset the duoply in 2018 after a stand-out year but other than that, since 2008 it's been Messi and Ronaldo exchanging prizes.
SOCCER・5 DAYS AGO

Lionel Messi's father has hit back at critics questioning whether Messi deserved to win the Ballon d'Or on Monday. The PSG star won his seventh Ballon d'Or on Monday, extending his lead over Manchester United's Cristiano Ronaldo to 7-5. Messi won a first major honour for his nation in 2021,...
SOCCER・4 DAYS AGO
Telegraph

They queued up outside The Lowry for hours before this game for a sight of Lionel Messi. Five miles away from the Etihad Stadium, supporters stood behind barriers waiting for the little genius. Paris Saint-Germain are more like rockstars than footballers. Their entourages filtered in and out of the five-star...
SOCCER・11 DAYS AGO
SPORTbible

Lionel Messi's Most Underrated Goal Of His Career Saw Him Hit The Floor, Still Somehow Scored

Lionel Messi's 'most underrated' goal of his career is a phenomenal solo strike in the Champions League as he somehow still found the back of the net despite falling over. Messi sensationally took things into his own hands during a European clash between Barcelona and Napoli back in August 2020.
SOCCER・9 DAYS AGO
LFCTransferRoom

Paris Saint-Germain forward Lionel Messi was awarded the prestigious Ballon d'Or for a record-extending seventh time in a ceremony at the Theatre du Chatelet in Paris on Monday. Messi, who led Argentina to Copa America success in Brazil in July for their first major trophy since 1993, spent the majority...
FIFA・6 DAYS AGO
punditarena.com

Lionel Messi has reacted to winning his record seventh Ballon d'Or, describing the award as "really special". The Paris Saint-Germain forward beat Robert Lewandowski to the prize, while Chelsea midfielder Jorginho finished third in the voting. "This trophy is really special. It gives me a feeling of accomplishment with the...
SOCCER・5 DAYS AGO
Sporting News

Lionel Messi claimed the seventh Ballon d’Or of his remarkable career on Monday, and the Paris Saint-Germain superstar was able to show off his latest honor during Wednesday's Ligue 1 match against Nice despite struggling with a stomach bug. The iconic Argentine appeared to be in good health when he...
UEFA・4 DAYS AGO

Minnesota United and U.S. Soccer announce that Allianz Field in Saint Paul has been selected as a venue for the critical World Cup Qualifier against Honduras on Wednesday, February 2, 2022. Lower.com Field, home of the Columbus Crew, will also host USMNT for the match against El Salvador, presented by...
MLS・11 DAYS AGO
Telegraph

England head coach Sarina Wiegman hailed striker Ellen White’s “incredible achievement” as the Lionesses’ No 9 reached 100 caps and marked the occasion by netting the winning goal in a slender but deserved victory over Austria. Manchester City’s White was in the right place at the right time to angle home...
WORLD・8 DAYS AGO
fourfourtwo.com

Scotland and Wales will meet each other in a World Cup play-off final if they win their respective semi-finals. Wales will play Austria at home in their play-off semi-final. Scotland were drawn in the same play-off path as Wales and will have home advantage against Ukraine in their semi-final on March 24.
SPORTS・9 DAYS AGO
The Guardian

Ralf Rangnick has spoke about his appointment as Manchester United interim manager and his plans for the team. Join Dave Tindall now
PREMIER LEAGUE・2 DAYS AGO
Sportsnet.ca

ZURICH -- European champion Italy and Cristiano Ronaldo's Portugal were drawn in the same World Cup qualifying playoffs bracket Friday, meaning at least one of them will miss next year's tournament in Qatar. Italy will face North Macedonia at home in a playoff semifinal next March, and the winner will...
FIFA・9 DAYS AGO
Sporting News

The Lionesses crushed their opponents on Tuesday, making a bit of history in their lopsided win. England fired 20 goals past Latvia in a historic World Cup qualifying win on Tuesday as they set a new record for the biggest win in a European competition. The Lionesses won 20-0 at...
SOCCER・5 DAYS AGO
goal.com

The federation launched an appeal against the outcome vs the Black Stars, which ended Bafana's dream. Safa CEO Tebogo Motlanthe has hinted that they would move to the Court of Arbitration for Sports (CAS) should they not be satisfied with the outcome of their appeal against the penalty Ghana were awarded in the World Cup qualifiers.
FIFA・4 DAYS AGO