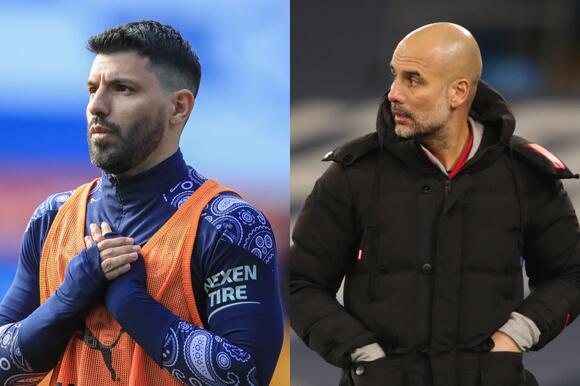 The Argentine concluded a ten-year spell at the Etihad Stadium with a summer switch to Catalonia, as he left City as one of the club's greatest ever players and their all-time greatest goalscorer with 260 goals to his name.

The final five years of his legendary spell in Manchester were frequently peppered with press rumours that City boss Pep Guardiola believed that Aguero wasn't suited to his unique style of play.

Such rumours were regularly rebuffed by both parties throughout, who insisted that they enjoyed a good working relationship during their time together at City, where they won a host of domestic silverware including three Premier League titles.

Four months on from his free transfer to Barcelona, Aguero has repeated that sentiment and provided further insight into his relationship with Guardiola ahead of his new side's league clash against Valencia at the weekend.

"No, I never had problems with (Pep) Guardiola. I never argued with him," said the 33-year-old in a recent interview with Spanish newspaper El País.

Aguero, who is set to be immortalised with a statue outside the Etihad Stadium, went on to discuss Guardiola's approach to tactics and team selection.

"He (Guardiola) is a coach who always wants the maximum. If he has an idea for a match in his head, he does it. It doesn't matter to him if he has to leave out the players who scored three goals in the last games," the striker added.

"The name of the player doesn't matter, unless it's (Lionel) Messi. I always accepted when I was playing and when I wasn't. Gabriel Jesus, upon landing in Manchester, began to play as a starter. I didn't say anything.

"I had to keep working for when my time came. When Jesus was injured in a match against Bournemouth (in 2017), there were no other strikers, and I had to play. In those three months (during the 2016/17 campaign), I scored twenty goals, and gave Pep (Guardiola) the confidence he needed".

Weekend football countdown: Get the latest from David Tindall as the 12-team draw for the European qualifying play-offs takes place
PREMIER LEAGUE・1 DAY AGO
CityXtra

Pep Guardiola's pursuit of perfection shows no signs of slowing down. The Catalan manager is never satisfied and always wants to push his players to reach even higher standards. Maybe that's the reason he's been so successful everywhere he's been. That was the same when Manchester City welcomed Club Brugge...
PREMIER LEAGUE・15 DAYS AGO
Tribal Football

Barcelona director of football Mateu Alemany has denied claims Sergio Aguero has retired. Journalist Gerard Romero is reporting Aguero is going to retire. But Alemany has dismissed the claims. He said, “You have to respect the situation a lot and give the to Kun. The medics will evaluate him. Accelerating...
SOCCER・7 DAYS AGO
Tribal Football

Barcelona chief Rafa Yuste has denied reports of Sergio Aguero choosing to retire. The striker is currently sidelined due to a heart concern. Amid claims from some sources of Aguero deciding to hang up the boots, Yuste said: "I can't confirm it. "I can say that there is a three-month...
SOCCER・6 DAYS AGO

The 33 year-old football icon is set to depart the game after 18 years at a professional level, following recent complications that came to light in one of his first La Liga matches at the Camp Nou club. The former Manchester City striker suffered a cardiac arrhythmia during a 1–1...
SOCCER・7 DAYS AGO
CityXtra

"Football Has Evolved, I Had No Choice" - Man City Star Describes How He Became the Perfect Pep Guardiola Player

The 30-year-old has made his name as one of the best midfielders in the world since his move to Manchester City from Wolfsburg for £55 million in the summer of 2015. De Bruyne, who won the PFA Player's Player of the Year award for the second successive season last term, has key to the Premier League champions' success under Pep Guardiola.
PREMIER LEAGUE・13 DAYS AGO
CityXtra

The Premier League champions have been in fine form on the road since August, having lost just once on their travels in the league this season - a narrow loss to Tottenham on the opening day of the campaign. However, a couple of disappointing displays at the Etihad Stadium saw...
PREMIER LEAGUE・8 DAYS AGO
Tribal Football

Samir Nasri says former Manchester City teammate Sergio Aguero is hanging up the boots. The Barcelona striker is currently sidelined after a heart problem was detected a fortnight ago. Nasri, now a French football pundit, revealed this morning: "He just sent me a message, unfortunately it's confirmed. So I have...
SOCCER・7 DAYS AGO

Barcelona striker Sergio Aguero will announce his retirement from football next week following his cardiac arrhythmia diagnosis. Aguero had to be substituted in the first half of Barcelona's 1-1 draw with Alaves last month with chest pains. After a spell in hospital it was announced that he had been diagnosed with the heart condition, and the striker was told to rest up for three months.
SOCCER・7 DAYS AGO
fourfourtwo.com

Manchester City boss Pep Guardiola claims Bernardo Silva is currently “undroppable”. The Portugal midfielder has enjoyed a fine start to the season after regaining his place in the Premier League champions’ side. The 27-year-old, who slipped down the pecking order last term, wanted to leave the club in the summer...
PREMIER LEAGUE・7 DAYS AGO
CityXtra

In European football this season, there have not been many players who have rivalled Manchester City's Joao Cancelo for contributions at both ends of the pitch. The Portugal international has been in excellent form in the left-back role for Manchester City, establishing himself as one of the Premier League's most creative talents.
PREMIER LEAGUE・6 DAYS AGO
FanSided

Manchester City could sign a striker in the January transfer window after missing out on Tottenham star Harry Kane in the past summer window. Tottenham chairman Daniel Levy stayed firm on his stance of not selling Kane to the club’s direct Premier League rival, which led to a deal not happening even after the Sky Blues tried until the final week of the summer transfer window.
PREMIER LEAGUE・8 DAYS AGO

After making just four La Liga appearances for Barcelona following a summer move from Manchester City, Sergio Aguero is being forced to retire due to a heart condition:. After their clash with Alaves on October 30th where he was substituted early, Aguero underwent surgery on his heart and was expected to follow medical advice for the next three months. But instead, doctors have made it clear that it’s not safe for the Barcelona frontman to keep playing with his condition, which is known as cardiac arrhythmia. Basically, an irregular heartbeat.
PREMIER LEAGUE・7 DAYS AGO
fourfourtwo.com

Pep Guardiola felt Raheem Sterling delivered a timely reminder of his abilities after scoring in Manchester City’s convincing 3-0 win over Everton on Sunday. The England forward grabbed the opening goal in what proved s comfortable afternoon’s work for the champions at the Etihad Stadium. It was the 26-year-old’s first...
PREMIER LEAGUE・6 DAYS AGO
90min.com

Pep Guardiola refused to discuss what the future holds for Raheem Sterling as the Man City winger continues to be linked with a move away. Sterling has scored just two goals in 15 games for City in all competitions so far this season, despite coming off the back of a stellar Euro 2020 campaign with England.
PREMIER LEAGUE・7 DAYS AGO
CityXtra

The Sky Blues returned to second place in the table with another win against the Toffees, following Liverpool's 4-0 thrashing of Arsenal and Chelsea's 3-0 win away at Leicester on Saturday. With Jack Grealish out injured and Kevin De Bruyne sidelined after testing positive for COVID-19 last week, Pep Guardiola...
PREMIER LEAGUE・6 DAYS AGO
CityXtra

The Premier League champions reduced the gap at the top of the top-flight table to just three points, with a convincing victory over Rafael Benitez's Everton side at the Etihad Stadium. Goals from Raheem Sterling, Rodri and Bernardo Silva ensured all three points for the hosts, who now face a...
PREMIER LEAGUE・6 DAYS AGO
ESPN

The summer transfer window was unlike any other; see all the major deals and check out how we graded the biggest signings. And just because the window is shut until January, that doesn't mean the rumours won't keep coming. Here's the latest gossip and speculation. TOP STORY: Cavani in for...
SOCCER・6 DAYS AGO
CityXtra

Guardiola, who joined Manchester City from Bayern Munich in 2016, has won ten pieces of silverware, including three Premier League titles, since taking over from Manuel Pellegrini at the Etihad Stadium. The 50-year-old has twice extended his contract since joining the Sky Blues, with his latest deal due to expire...
PREMIER LEAGUE・5 DAYS AGO
vavel.com

Manchester City were back at their scintillating best on Sunday, brushing aside Rafa Benitez' Everton by three goals to nil. Pep Guardiola was full of praise for his side following the game, as the Spaniard now turns his attentions towards a crucial Champions League clash with PSG on Wednesday evening.
PREMIER LEAGUE・6 DAYS AGO