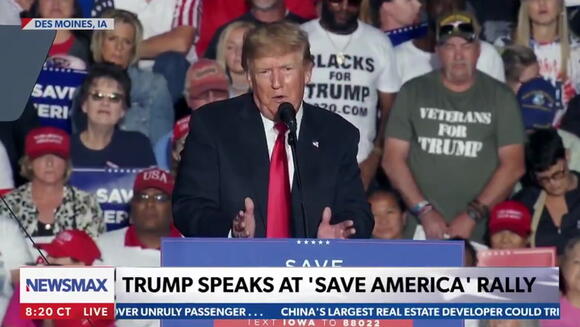 Donald Trump has become the favourite to win the election in 2024, as Joe Biden falls behind the former US president and faces challenges with his domestic agenda.

Mr Trump, according to betting odds, had been ahead in the race for the Republican nomination in 2024 but had not been on odds for a win in the election.

However, recent odds by Betfair Exchange found Mr Trump is now 4.8 to win in 2024. Mr Biden, meanwhile, was at 5.1 after falling behind his own vice president, Kamala Harris , in the presidential tie-up.

Although neither Mr Trump nor Mr Biden have formally announced a run in 2024, it is unusual for a sitting president not to take a second run at the White House. There has also been speculation that Ms Harris will run instead of her boss.

That comes despite both men being septuagenarians, and Mr Biden turning 82 — making him an octogenarian — before Inauguration Day in 2025.

Mr Trump would be 78, and almost half a year older than Mr Biden was in January. Vice President Harris would be 60, and a similar age to former president Harry Truman when he was inaugurated in 1945.

Barack Obama, in comparison, was 47 at the time of his 2009 inauguration and among the youngest ever US presidents.

Mr Trump, speaking at a rally in Iowa last Saturday, again hinted at another run in 2024 and falsely alleged that Democrats “used Covid in order to cheat and rig” the 2020 race.

The so-called “Big Lie” about his 2020 election loss has been a running theme since before Mr Biden assumed office in January, and after Mr Trump lost the race fairly.

His odds for winning in 2024 were as low as 21.0 in the wake of his second impeachment trial and alleged incitement of a riot on the US Capitol that left five people dead on 6 January.

Republicans, after attacking Mr Trump for the chaos, have largely folded and have followed his lead since the riot. Betting odds suggest he would win a Republican nomination contest.

Mr Trump told right-wing TV network Real America’s Voice last month that “a bad call from a doctor or something” would be something that stopped him from running in 2024.

Trump Was Impeached Twice, While He Was The Sitting President, If He Was To Win The 2024 Bid, He Would Be Impeached Again Within The First 3 Months In Office!!! There's No Safe Or Reliable Future With Trump in Office. He Is Old Enough To Retire ; He Should Just Quit While He's Still in the Shadows.

Trump will never be President again! He should have never been President to began with!

The former president's statement prompted sarcastic comments on social media from a range of his detractors.
PRESIDENTIAL ELECTION・14 HOURS AGO
Newsweek

In this daily series, Newsweek explores the steps that led to the January 6 Capitol Riot. On Saturday, December 5, Donald Trump flew to Valdosta, Georgia, to speak at a rally to support two Republican party candidates for the Senate, Kelly Loeffler and David Perdue. It was his first rally since the election, a month earlier.
PRESIDENTIAL ELECTION・14 HOURS AGO
WashingtonExaminer

Former Vice President Mike Pence says he knows he did "the right thing" on Jan. 6 in certifying the 2020 election and ignoring the requests from then-President Donald Trump to overturn the Electoral College results. "I know in my heart of hearts that on that day, we did our duty,...
PRESIDENTIAL ELECTION・9 HOURS AGO

In a blurb on the cover of Mark Meadows’ new book, Donald Trump calls the former congressman a “great chief of staff – as good as it gets” and predicts “a great future together”. The former president has also promoted the book to his followers. Now the book is in...
POTUS・1 DAY AGO
News Channel 3-12

CNN By Veronica Stracqualursi, CNN Bob Dole, a Republican Party stalwart and presidential hopeful who espoused a brand of plain-spoken conservatism as one of Washington’s most recognizable political figures throughout the latter half of the 20th century, died Sunday. “Senator Robert Joseph Dole died early this morning in his sleep. At his death, at age The post Bob Dole, giant of the Senate and 1996 Republican presidential nominee, dies appeared first on NewsChannel 3-12.
U.S. POLITICS・6 HOURS AGO
iHeartRadio

In this daily series, Newsweek explores the steps that led to the January 6 Capitol Riot. Joint Chiefs Chairman Army General Mark Milley spent December 4 at the White House, attending meetings with the national security team and principals—all the while, thinking he'd be fired. The chain of command, and the entire national security leadership had been disrupted.
POTUS・1 DAY AGO

"Senator Dole was an American hero, a statesman of the highest order & one of the greatest legislators of all time," wrote U.S. Senator Roger Marshall.
CONGRESS & COURTS・6 HOURS AGO
WashingtonExaminer

Wyoming Republican Rep. Liz Cheney, vice chairwoman of the House select committee tasked with investigating the Jan. 6 attack on the U.S. Capitol, issued a warning to former President Donald Trump amid his posturing that he wanted to debate members of the committee: Lie, and there will be criminal penalties.
CONGRESS & COURTS・3 DAYS AGO
The Independent

Asked about a shocking new claim that Donald Trump tested positive for Covid-19 before a presidential debate in 2020, Joe Biden had a blunt response.“I don’t think about the former president,” he told a press conference on Wednesday – before calmly turning and walking away.Mr Biden was being asked about a story from an upcoming book by Mark Meadows, Donald Trump’s last presidential chief of staff. In The Chief’s Chief, Mr Meadows recounts that the ex-president – known as “the former guy” in the Biden White House – was departing for a Pennsylvania rally three days before the debate...
PRESIDENTIAL ELECTION・3 DAYS AGO
Fox News

Sparks flew on the set of ABC's "The View" Friday as co-hosts clashed over President Biden's decision to restart the Trump-era "Remain in Mexico" policy. During a segment discussing Biden's decision, co-host Ana Navarro butted heads with Sunny Hostin and guest host America Ferrera over the policy, with the latter two excoriating Biden for breaking his campaign promise to end it, and the former arguing that the policy discouraged people from attempting to make the dangerous journey to the southern U.S. border.
PRESIDENTIAL ELECTION・2 DAYS AGO

The now-former spokesman for District of Columbia Democratic Mayor Muriel Bowser told Fox News on Wednesday that President Biden's tenure in office has led him to change party affiliation and also to vote for GOP businessman Glenn Youngkin in the off-year gubernatorial election in Virginia, where he resides. Victor Jimenez...
PRESIDENTIAL ELECTION・3 DAYS AGO
Business Insider

John Eastman is the second witness who has invoked or plans to invoke the Fifth Amendment in response to a January 6 committee subpoena.
PRESIDENTIAL ELECTION・2 DAYS AGO
MarketWatch

Will President Joe Biden's $2 trillion social-spending and climate package actually get the Senate's OK this month, as that chamber's leader has promised? Two analysts from opposite ends of the political spectrum say that looks likely.
PRESIDENTIAL ELECTION・2 DAYS AGO
wearebreakingnews.com

Donald Trump With Covid-19 During The Debate With Biden?

While Trump took the negative result as “full permission to go ahead like it’s nothing,” Mark Meadows says he ordered everyone in his immediate circle to treat the president like he’s infected. “I didn’t want to take unnecessary risks,” Meadows writes, reportedly, “but I also didn’t want to alarm the...
PRESIDENTIAL ELECTION・1 DAY AGO

Transportation Secretary Pete Buttigieg, in North Carolina on Thursday for an event promoting the new infrastructure law, had nothing but gushing praise for Vice President Kamala Harris, who in turn lauded the agenda of the man who beat both of them in the 2020 Democratic presidential primary: President Joe Biden.
PRESIDENTIAL ELECTION・2 DAYS AGO
Newsweek

Trump called it "not true" that Melania is enjoying private life and isn't interested in returning to Washington, D.C.,
PRESIDENTIAL ELECTION・3 DAYS AGO
Vanity Fair

Republicans: Let People Die of COVID or So Help Us We’ll Shut Down the Government

It’s hard to say what’s more idiotic: The possibility the GOP could shut down the federal government, or the reason they’re threatening to do so. Lawmakers are facing a Friday deadline to fund the government, with Democrats and Republicans currently at loggerheads over how long to kick the can down the road. Democrats want to pass a continuing resolution, or short-term spending bill, that would push off a debate over funding until next year. But a group of Senate Republicans, with support from their House colleagues, are preparing to complicate things further. According to Politico, a cadre of conservatives are threatening to shut down the government to keep Joe Biden’s COVID vaccination requirements on businesses from taking effect.
CONGRESS & COURTS・4 DAYS AGO
HuffingtonPost

Kayleigh McEnany, a White House press secretary under Donald Trump, defied belief with her latest claim about President Joe Biden. McEnany, who is now a co-host on Fox News’ “Outnumbered” show, on Monday accused Biden of politicizing COVID-19. “No one has politicized this virus more than President Joe Biden,” she claimed.
PRESIDENTIAL ELECTION・5 DAYS AGO