Howdy folks—I was reading in the Clermont Sun about a young boy, seven years old, that raised a pumpkin for the Ashland County Fair that weighed 728 pounds. For a young boy to raise a pumpkin that big is just great. As I wrote this, the Brown County Fair is going on. I won’t be able to go this year. They will have some big pumpkins there. I saw in the Enquirer about the Ivorybill woodpecker and that it is becoming extinct. A friend of mine a few years ago said he saw an Ivorybill woodpecker around Bethel. I have never seen one. I would have liked to. I did see a snow white owl and boy was it beautiful. We need to be feeding the birds. The article said that we are losing different kinds of birds. I have seen a Cedar Waxwing and it was beautiful. They feed on fruit and insects and stay in flocks. 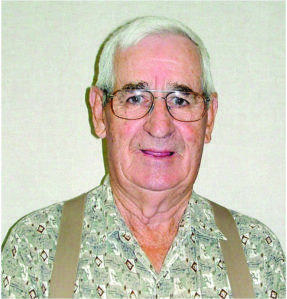 The soybeans are ready to harvest. I was talking to a feller at Frisch’s today and he said his friend was harvesting soybeans and they are running between 50 to 64 bushel per acre. Then I talked to Jason Grant, and he said the beans he has cut so far have been in the 54 to 63 bushels per acre range. When I was farming, and that has been over 70 years ago, if we got 35 bushels per acre that was good. I talked to John Pringle to see how his apple orchard is producing and he said on Saturday, October 2, they had an event. Their apple crop includes red delicious, Mel Rose, Winesap, Granny Smith and plenty of apple cider. They will also have honey from blackberries. They offer u-pick and deer apples. If nothing happens, they will have the same event next year. John 4 acres of honeybees.

I talked to Sherry’s Lake and the big catfish so far was a 44-pound shovel head catfish. While I was talking to Sherry’s Lake nothing had been caught and it was raining really hard. They only have one fisherman there so far today. They have been catching lots of channel catfish and the feller said when the rain quits, they will have more fishermen there. I talked to Cedar Lake and they are having a Fishing tournament today. The lady said they have 25 or 26 fisherman there at this time. The fishermen are catching plenty of Channel catfish. Channel catfish are really good when they are fried up.

Last Saturday morning I had a surprise. The Kinner‘s picked me up and took me out for a birthday breakfast. We went down to a restaurant along 125. There was a big crowd. The food was great. Then we came back, and Mike stopped at their place so I could see their animals. They have sheep, goats, chickens and ducks. Jamie and Mike sure take good care of them and Jamie has some of the goats well trained so when she goes out they hear her and come to her. Now last week, Paula’s sister brought her down to Frisch’s so her and I could share a meal. I don’t get to see Paula very much since she doesn’t have a car any longer. Her sister also brought her down so we could go to Grange on Friday evening. That was good. It was good to be with Paula, if only for a short time.

I plan to write more about the feller walking the Appalachian Trail in my next article. His name is Aaron Beckelhymer.

Earl Ray Kern, a resident of Georgetown, Ohio, passed away on September 12, 2022, at the age of 84. He was born in Tom’s Creek, Virginia to the late
GEORGETOWN, OH・12 DAYS AGO
Clermont Sun

The Bethel-Tate School District is mourning the loss of retired Bethel-Tate Middle School teacher Mr. Jim Fay who passed away on September 12,
BETHEL, OH・12 DAYS AGO

The Clermont County Veterans Service Commission is hosting a Hoxworth Blood Drive on Friday, October 7th from 10 A.M. to 11:45 AM and from 1:0
CLERMONT COUNTY, OH・12 DAYS AGO
Clermont Sun

New Richmond’s homecoming festivities have been ramping up in the lead-up to the big weekend, which is from Sept. 15 to Sept. 17.
NEW RICHMOND, OH・20 DAYS AGO
Clermont Sun

On Friday and Saturday September 23rd and 24th, the city of Loveland will host their second annual Oktoberfest Event. The Little Miami River C
LOVELAND, OH・20 DAYS AGO

In the minds of many, childhood and school days are the best days of one’s life. However, that’s not every student&rsqu
NEW RICHMOND, OH・20 DAYS AGO
Clermont Sun

Student leaves home for new experience in US

Imagine leaving behind your home country of Switzerland for a year. What would it feel like not to see your loved ones for 365 days? Now, imag
BATAVIA, OH・27 DAYS AGO

Dolly Parton’s Imagination Library of Clermont County delivers free books to kids five yrs. and younger Sign up now: Help program reach goal to sign up 50 percent of the eligible children in county by the end of the year

Sherry Lee Mitchell, age 64 of Georgetown, Ohio died Wednesday, August 31, 2022, at the Good Samaritan Hospital in Cincinnati, Ohio. She grew up on a
GEORGETOWN, OH・26 DAYS AGO
Clermont Sun

John Boys, an industrial electrician from New Richmond, Ohio, had no plans to go to the doctor until his employer offered incentives for getti
NEW RICHMOND, OH・27 DAYS AGO
Clermont Sun

On Aug. 27, a 20-year-old Bethel man was reportedly stung more than 20,000 times by African killer bees, and now the community is coming together to h
BETHEL, OH・27 DAYS AGO