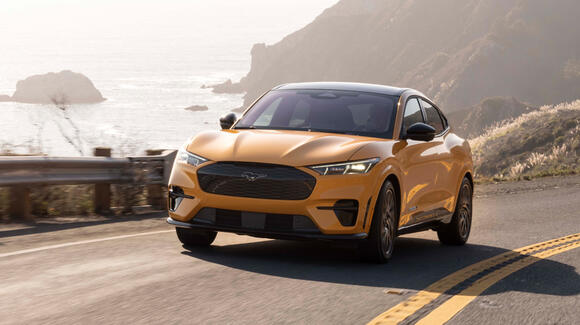 Following last year’s debut of the Mustang Mach-E electric crossover, Ford has now unleashed the GT that, like its namesake muscle-car counterpart, offers more power and track-inspired performance. Despite protests from some hardcore fans that “this isn’t a Mustang,” the Mach-E GT (starting at $59,995) brings more attitude and edge to a vehicle that designers and engineers honed for the present-day customer who needs sport-utility functionality, but doesn’t want to burn gas.

The GT version uses the extended battery pack from the standard Mach-E and the larger motor on both axles (found only on the rear of the latter vehicle) for a total output of 480 hp and 600 ft lbs of torque. The power train also gives it the ability to cover zero to 60 mph in 3.8 seconds. What’s more, the GT sits 10 mm closer to the ground than the introductory model, giving it a lower center of gravity and a more planted stance. And range for the base GT is estimated at 270 miles.

On a test drive through the San Francisco Bay Area, our Mach-E GT kept pace with the myriad Teslas on the road as we cruised Highway 101 through Marin County, alternating between full control of the wheel and Ford’s new Blue Cruise system, which allows stints of hands-free driving using the adaptive cruise control and lane centering features. Ford’s system is not as smooth as GM’s Super Cruise (soon to be updated to the more sophisticated “Ultra Cruise”), but it’s still a welcome relief in stop-and-go traffic or during long drives on well-marked highways.

Yet with all that instant electric torque on tap, we preferred to stay fully in charge, goosing the throttle to briefly pull past a dueling Nissan GT-R and Dodge Challenger (with aftermarket exhausts whining like angry leaf blowers.), Needless to say, we glided silently by as they duked it out in comical cacophony.

The model variant to get, though, is the GT Performance Edition (for a $5,000 premium), which bumps up peak torque to 634 ft lbs and adds MagneRide adaptive suspension, bigger front brakes and 20-inch wheels with specially developed Pirelli summer tires. That version boasts a zero-to-60 mph time of 3.5 seconds, but range is reduced to 260 miles.

On a winding portion of Highway 1, from Stinson Beach to Sausalito, the Performance Edition handled its weight well, especially in “Unbridled” (sport) mode. That setting presented a comfortable yet firm ride that minimized body roll and kept us planted on decreasing-radius and off-camber turns. Contoured sport seats, designed exclusively for this edition, held us in all the while.

When it comes to the Performance Edition, the efforts of engineers were best put on display by way of a dusty parking lot that was transformed to an autocross course at the edge of San Francisco Bay. On this testing ground, Ford specialists had us switch over to a GT-exclusive setting called “Unbridled Extend,” which manages power output to give more continuous, sustained performance in a track environment. This setting won’t give you the fastest lap, but it will give you a few consistent ones. Unbridled Extend reduces traction control and stability control, remaps the accelerator response and shifts the front-to-rear power bias from 50/50 to 60/40, in favor of the rear.

Sliding the Mach-E GT Performance Edition around on the autocross makes it clear just how much Ford has tried to keep the model a spiritual member of the Mustang family. We wouldn’t call it nimble, but the weight distribution keeps it balanced, and the combination of the stiff chassis (with the battery pack integrated) and sport-tuned suspension keep it fun and predictable lap after lap. Of course, that’s only if you brake in plenty of time for turns. Push it, and you’re reminded that it’s still a very heavy car.

If we have any complaints, it’s with the upright tablet that serves as the Mach-E’s central screen. While some automakers choose sleek horizontal displays, or at least more elegantly integrated tablets, the Mach-E’s interface looks like a stuck-on afterthought. And navigating menu functions isn’t always intuitive. However, Ford says it wants to incorporate customer feedback by keeping tabs on social media and other channels, so while the tablet might not change anytime soon, the company can tweak software-based functions through cloud-based data and over-the-air updates.

The Mach-E does keep pace with competitors when it comes to mobile integration, with the ability to use a cell phone as a key and its provision of a dedicated app that gives drivers instant access to charging status, range, tire pressure and other vehicle information. Also on the mark is the optional B&O premium audio system, offering pristine sound without competition from engine noise, although the vehicle does offer a synthetic acceleration sound in the cabin, which you can turn off.

Each new Mach-E includes a two-year membership to Ford’s Blue Oval charging network, which allows owners to pay on multiple charging platforms with a single account. Ford representatives say the program gives drivers access to the largest public charging network in North America, one that comprises 19,500 stations. The marque is also relying on connected vehicle data to deploy teams around the country to physically seek out problematic chargers and keep their charging maps up to date.

According to Ford, all 2021 Mach-E examples are spoken for, but orders for 2022 iterations are now being accepted. We’re eager to see how the GT will stack up with Rivian ’s all-electric R1S, especially since Ford is an investor in Rivian to the tune of $500 million. For the time being, however, the Mach-E GT, with its sporty looks and even sportier performance, is one of the most exciting crossovers on the road.

The G-Wagen isn’t the only option for Mercedes-Benz lovers looking to off-road in style. Classic Youngtimers Consultancy has just unveiled an insane six-wheel version of the German marque’s X 350d “Black Edition” truck. With a host of modifications it’s likely one of the gnarliest Mercedes you’ll lay eyes on. You’d be forgiven for not knowing that the German automaker has a pickup truck in its lineup. The X-Class was introduced in 2017 and only released in Australia, New Zealand and parts of Europe, Africa and Latin America. It never quite managed to catch on, and the brand pulled the plug on it...
CARS・7 DAYS AGO
Robb Report

The mid-’90s Toyota Supra is so coveted among enthusiasts that there are some willing to pay supercar prices for it. That’s why an exotic car dealership in Illinois, Diamond Motorworks, recently listed a gorgeous example from the beloved car’s fourth generation for $299,800. Why so much for this specific Supra? Because it’s fully stock and remains in nearly pristine condition 28 years after rolling off the line. Although it was a favorite of the budget conscious sports car lovers dating back to the early ‘80s, the Supra didn’t really begin the ascent to legend status until 1993. That’s the year that the...
BUYING CARS・14 DAYS AGO
Robb Report

Car of the Week: This 2021 Iso Rivolta GT Zagato Has Only Driven 169 Miles, and It’s Up for Grabs

Two years ago, fabled Italian coachbuilder Zagato reignited the once-renowned Iso brand with the introduction of its Corvette Z06-powered, carbon-fiber-bodied Iso Rivolta GT Zagato. Just 19 examples were offered, and all were immediately snapped up by passionate collectors. One of those buyers was Mike Odierna from Arizona. Already the owner of a super-rare 2013 Aston Martin V12 Zagato, Odierna signed the contract to get the first of Zagato’s latest model at the time. After a two-year wait, this oh-so-elegant two-door coupe, with its flowing lines inspired by the thundering Iso Grifo A3/C from the 1960s, was delivered just in time for...
CARS・9 DAYS AGO
Motor1.com

The 2022 Ford Maverick is newly on sale, though it appears that the Blue Oval is already looking toward the model’s future. Fresh spy shots have captured a camouflaged test vehicle, with the wrap covering everything below the truck’s greenhouse. It appears the pickup is trying to hide a revised lower front fascia, though that’s not the vehicle’s only difference from the standard Maverick.
CARS・28 DAYS AGO

Mustang. Family Car. Doesn’t seem quite right, does it? When the Mach-E was first revealed well over a year ago, I too had a hard time digesting that Ford had slapped a galloping stallion on the front of an electric SUV. Seemed like short-term gain for long-term brand damage. But...
CARS・13 DAYS AGO
gmauthority.com

A custom Chevy Malibu XL-based two-door pickup truck made its debut at the 2021 Guangzhou Auto Show over the weekend, turning heads and making headlines with its El Camino-esque exterior styling. From what we can gather, this customized Malibu was built by Yuan Qicong, the presenter of a popular Chinese...
CARS・8 DAYS AGO
Carscoops

The Chevy SS/Holden Commodore is well-known as one of the most unassuming RWD V8 performance sedan that can be had with a manual transmissions. But a similar car that’s not often talked about is the Ford Falcon XR8 Sprint, and now one is up for sale. Albeit sporting an automatic...
BUYING CARS・15 DAYS AGO
insideevs.com

Plenty of people took issue with Ford’s side-glance branding of its four-door electric car as a Mustang. If you’re among those naysayers, then turn away from today’s Nice Price or No Dice custom Mustang panel wagon. If, however, you’re ok with all things Mustang, then read on. Speaking of reading,...
BUYING CARS・7 DAYS AGO
Motorious

This incredible American icon has spent the past 21 years in hiding and is now ready to show the world what it has got up its sleeves. The original Ford Mustang is a legend in the automotive community for being America's first pony car. While the later models may resemble more of a European-inspired sports car, the first generation made a point of being as patriotic as one could get and reassembled a mashup between the muscle cars of old and small fast sports cars like the Corvette. In 1964, these beautiful cars allowed the nation's youth to have fun with a pretty fast car for a low price. This trend soon led to cars like the Camaro, Barracuda, and Charger. As such, the first-gen 'Stang has gained a massive following with enthusiasts young and old alike.
CARS・6 DAYS AGO
teslarati.com

The Tesla Model Y is one of the best electric all-rounders money can buy right now, and in range-topping Performance guise it will out-accelerate almost any other car it will meet on the road. What if that car is the Ford Mustang Mach-E GT Performance Edition, you ask? That’s what...
CARS・14 DAYS AGO
MacRumors Forums

One of the hottest electric vehicles at the moment is Ford's Mustang Mach-E, and I recently had a chance to spend some time in a 2021 model in First Edition trim to test out all of its features including the SYNC 4A infotainment system on a massive 15.5-inch portrait display with support for wireless CarPlay.
TECHNOLOGY・14 DAYS AGO
MotorBiscuit

Driving an old, naturally aspirated and carburetted V8 is always fun - we would prefer that over an autonomous ride in a fully-electric shuttle any day of the week and twice on Sundays. And if we can do that on an unrestricted section of the Autobahn, it’s an absolute dream come true.
CARS・14 DAYS AGO
Jalopnik

What Do You Want To Know About The Ford Mustang Mach-E GT?

There’s only one other car that’s done the Tesla thing of knocking my brain into the back of my skull, and it’s this Ford Mustang Mach-E GT. I laughed out loud. That quick hit is only a little piece of what I want to know about the Mach-E. I want to know if this is the car you buy if you look at the entire Tesla ecosystem and say, “I’d rather not,” even if you still want an electric car.
CARS・12 DAYS AGO