An 18-year-old Barcelona sensation was just given a $1.2 billion price tag, making him soccer's most-valuable-ever player 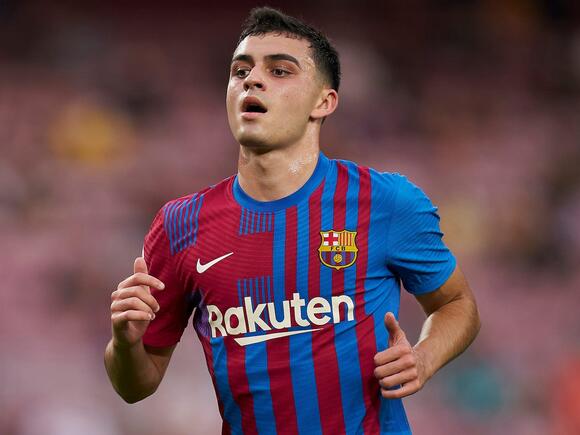 FC Barcelona's teenage midfielder Pedri has agreed a long-term contract extension at the club which includes an astonishing $1.16 billion release clause - the joint biggest ever in soccer history.

His new contract will be officially signed on Friday, the club said.

Pedri joined Barcelona from Las Palmas in August 2020 and played 53 matches for the La Liga giant last season, more than any other player at the club.

As well as starring for Spain at Euro 2020 as Luis Enrique's side reached the semifinals, the teenager also helped his country win a silver medal in the Tokyo Olympics' soccer tournament.

His new release clause is the same as Real Madrid striker Karim Benzema's, and $323 million more than Lionel Messi's biggest ever at Barcelona.

Messi's final buy-out clause at the club before he left on a free to join Paris Saint Germain in the summer stood at $837 million.

Barcelona is well-known for its stratospheric release clauses, which are generally put in place so that the club has more control over how much it sells its players for, and to whom.

With a huge release clause, opposition sides are unlikely to ever match it, meaning that Barcelona can more easily name a price, and negotiate on its own terms.

The club has increased its release clauses massively in the four years since Neymar's move from the Catalan city to Paris Saint-Germain, a transfer triggered by PSG activating the Brazilian's roughly $260 million release clause.

Barca didn't want to sell Neymar, and ever since that deal, the club has sought to prevent such a transfer happening again.

The strategy has lead to some of Barcelona's less-prominent players getting release clauses that are many times higher than they could ever possibly sell for.

For instance, the club's 32-year-old reserve goalkeeper, Neto, reportedly has a $232 million release clause, while journeyman striker Martin Braithwaite has a $348 million clause.

After it was claimed that Xavi wants to take Liverpool midfielder Thiago back to Barcelona, a former Everton player has been speaking about the transfer links and why he thinks the 30 year old may be interested in the move. The former midfield legend for the Catalan club has just...
PREMIER LEAGUE・13 DAYS AGO
LFCTransferRoom

As PSG prepare to take on Manchester City in the Champions League on Wednesday, Lionel Messi has been giving his opinion on who he thinks could win the competition this season. Messi made a surprise move when he left Barcelona in the summer to make the switch to Paris to...
PREMIER LEAGUE・8 DAYS AGO
CBS Sports

FC Barcelona midfielder Alexia Putellas won the 2021 Ballon d'Or Féminin prize on Monday, awarded to the best women's player of the year. Putellas wins the prestigious individual award after a remarkable year with Barcelona, as the club went on to complete a treble win during their 2020-21 season. The win also marks the return of the award, after the pandemic canceled the event in 2020. Previous winners of the award were Ada Hegerberg and Megan Rapinoe, who won in 2018 and 2019, respectively.
UEFA・3 DAYS AGO
LFCTransferRoom

According to a report, Wolves are willing to slash the price of Liverpool target and former Barcelona player Adama Traore. The Spanish international has been linked with the Reds since last summer when it was rumoured that Wolves were asking for £50million. A report from Football Insider however claims that...
PREMIER LEAGUE・2 DAYS AGO

It takes LeBron James 16 hours of work to afford a home. Conor McGregor can buy 1 in half the time

Some of the world’s top athletes move regularly in order to play for different teams, and they often don’t have a problem paying five (or more) figures on monthly rent while they search for a more permanent home. When superstar soccer player Lionel Messi recently switched teams from F.C. Barcelona...
NBA・14 DAYS AGO
SPORTbible

Lionel Messi emphatically denied a request from a director involving his wife ahead of winning his seventh Ballon d'Or on Monday night. Messi beat Robert Lewandowski, Jorginho and Karim Benzema to the prize, which was presented to him by former teammate and close friend Luis Suarez. Before the ceremony got...
SOCCER・2 DAYS AGO
SPORTbible

Lionel Messi was like a proud father watching 19-year-old Pedri collect the Kopa Trophy at the 2021 Ballon d'Or award ceremony. Pedri beat off competition from the likes of Jude Bellingham and Mason Greenwood to be crowned the best young player following a stellar breakthrough season at Barcelona. The midfielder...
SOCCER・3 DAYS AGO
Insider

"It is unacceptable that the person responsible for awarding such a prestigious prize could lie in this way," Ronaldo said.
SOCCER・2 DAYS AGO
The Independent

Liverpool are hoping to compound Everton’s misery when they travel to Goodison Park for the Merseyside derby this evening. Jurgen Klopp’s side are on a terrific run of form, having beaten Arsenal and Porto before thrashing Southampton last weekend all in the space of eight days. FOLLOW LIVE: Everton vs Liverpool – latest updatesLiverpool came into the midweek round of fixtures just two points adrift of leaders Chelsea and have already scored 39 goals in 13 Premier League games this season. However, for Everton, fortunes are far bleaker. Rafael Benitez is under increasing pressure after the Toffees limped to a...
PREMIER LEAGUE・1 DAY AGO
Sporting News

Cristiano Ronaldo did not mince words in responding to comments made by the chief editor of France Football, the French weekly publication that since 1956 has organized the Ballon d'Or awards that recognize the best soccer players in the world. In a story about the 2021 Ballon d'Or, which takes...
SOCCER・3 DAYS AGO

The 2021/22 summer transfer window was one of the craziest ever seen in football, as it saw two of the best players of the generation, Lionel Messi and Cristiano Ronaldo change clubs at the same time. While Ronaldo returned to his former Premier League club Manchester United, Messi took the huge leap of leaving his boyhood club FC Barcelona for PSG.
PREMIER LEAGUE・9 DAYS AGO
Yardbarker

Messi held off competition from the Polish international who finished second and Chelsea’s Jorginho who was third to win the trophy for an incredible seventh time. The player who shocked the football world when he moved from Barcelona to PSG in the summer enjoyed success with Argentina when they beat Brazil to the Copa America.
2 DAYS AGO
whbl.com

Soccer: Xavi should be given time to succeed as Barcelona’s coach, says Puyol

(Reuters) – Barcelona head coach Xavi Hernandez should be given “time and confidence” to succeed at the Catalan club, former captain Carles Puyol said after his ex-team mate began life in his new role with a 1-0 home win over local rivals Espanyol. Xavi, who played for Barcelona for 17...
SOCCER・11 DAYS AGO
ESPN

Count the Ballon d'Or as one of those grand old institutions that's insanely popular. There are several reasons for it, too. There's history: The Ballon d'Or dates back to 1956, which means it predates the European Championships, yellow and red cards, substitutions, color TV, remote controls and of course, FIFA (the video game). There's the fact that top players really, really care about winning it: Clubs mount campaigns on behalf of their star players, guys like Cristiano Ronaldo (despite already having five of these at home) get annoyed when it gets canceled (like it did last year due to the coronavirus pandemic), while Bayern Munich striker Robert Lewandowski's face lit up like a child hearing reindeer footsteps on the roof when he found out he was among the favorites.
MLS・2 DAYS AGO
insideedition.com

The manager of Italian soccer club AS Roma has gifted his 18-year-old wonderkid player a pair of very expensive Balenciaga sneakers after promising the young star the footwear if he scored a goal. Jose Mourinho made good on his word after Ghanaian international Felix Afena-Gyan came off the bench and...
APPAREL・7 DAYS AGO
ClutchPoints

Man City coach Pep Guardiola admitted we may never see the achievements of Lionel Messi and Cristiano Ronaldo be replicated. Speaking to reporters before his side’s Champions League matchup against Messi and PSG, Guardiola said:. “I don’t imagine [it will happen] as what these two guys have done will be...
PREMIER LEAGUE・8 DAYS AGO
FanSided

Real Madrid is primarily a buying club, that focuses more on recruiting the best talent from various countries across the globe. Few players do stutter in the process of pursuing their dreams at Real Madrid, but there will always be players who grow up to become one of the best players in their respective positions and also become club legends in the process. Real Madrid provides the perfect platform for players to fulfill their potential, which is one of the reasons why Real Madrid is a dream club for a lot of footballers.
SOCCER・6 DAYS AGO
The Independent

When Thomas Tuchel comes in after games and scans the other results, he doesn’t automatically go to Liverpool or Manchester City. At least not yet.“There are some teams behind us who show consistency, who show quality, who show determination,” the Chelsea manager said last week. “This is what it is. You have a right to be proud of your competition here, in the Premier League, and for us it feels good because we are in the middle of that race and we want to stay here. I don’t know if it will settle down.”There is a bit of a...
PREMIER LEAGUE・1 DAY AGO