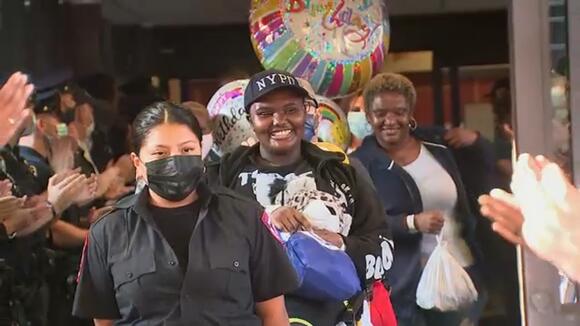 The 16-year-old girl who survived being shot in the head in a Brooklyn park was miraculously released from the hospital Friday morning, just two weeks after her brush with death. Friends and family of Kyla Sobers-Batties joined police officers as she was released from Methodist Hospital. Kyla, whose 17th birthday is Saturday, smiled and waved wearing an NYPD hat as she was wheeled into a waiting ambulance. "I feel great, yes," she said. "It feels amazing. Thank you." Raw video of her exit:

Her mother, Nadine Sobers, was anxious to get her daughter home. "Thank you so much to the hospital and to the police," she said as she climbed aboard the ambulance with her daughter. Officers cheered as she was driven home, marveling at her amazing recovery. "At the scene there was a lot of blood loss and it didn't look good," said Command Officer Judith Harrison, NYPD Patrol Borough Brooklyn North. The Cobble Hill High School senior was struck by a stray bullet while hanging out with friends in Nicholas Naquan Heyward Jr. Park near the Gowanus Houses in Boerum Hill on October 1. She underwent successful surgery to remove bullet fragments and was in a medically induced coma for a time. Command Officer Harrison organized Friday morning's hospital send off. "And this young lady was in the park with her friends, a good kid, someone who went to school, got good grades, who endeavors to go to college. She actually wants to major in law. She's a great kid and she's shot by a stray bullet. It's horrific," Harrison said. Police are looking to talk to three young men spotted on surveillance following the shooting.

(Previous coverage) Diana Rocco has more on the search for suspects after a 16-year-old was shot in Brooklyn.

So far, no arrests have been made. Kyla's grandmother has a message for the gunman who shot her granddaughter. "I wish him all the best. That's all I can say. My daughter said she can't forgive, but I have to forgive," said Joy Sober, Kyla's grandmother. Local organizers set up a GoFundMe page to help with her medical expenses. Anyone with information in regard to this incident is asked to call the NYPD's Crime Stoppers Hotline at 1-800-577-TIPS (8477) or for Spanish, 1-888-57-PISTA (74782). ALSO READ | What Gabby Petito's death by strangulation could mean for Brian Laundrie's case

what a mighty God we serve. Wishing you a speedy recovery and continued your healing process.

I hope your life is fantastic from here on out, you deserve. I am very happy for you and your family

The teen's family said he has big dreams to go into real estate and had been helping at his father's business on the weekends when he's not in school.
BROOKLYN, NY・1 DAY AGO
ABCNY

Officials say a man is in custody after stealing a school bus and crashing into several parked cars along the way.
BROOKLYN, NY・16 HOURS AGO

Before starting his training as a firefighter, Vincent Malveaux worked as an EMT for four years including throughout the coronavirus pandemic.
NEW YORK CITY, NY・4 HOURS AGO

Police have arrested a suspect in a shooting that killed an Uber driver in September in Harlem.
PUBLIC SAFETY・23 HOURS AGO
ABCNY

Suffolk Officer Tim Thrane, who spent weeks in a medically induced coma after being hit by an alleged drunk driver, was discharged to cheers Friday.
SUFFOLK COUNTY, NY・3 HOURS AGO
ABCNY

Officials are investigating how an anti-vaccination ad, designed to look like a New York City ad encouraging vaccination, somehow ended up in a bus stop in Brooklyn.
BROOKLYN, NY・22 HOURS AGO
ABCNY

They are accused of slapping a 3-year-old boy across the face last Friday. Police say the women approached an 18-year-old girl Sunday and pulled her to the ground.
BROOKLYN, NY・2 DAYS AGO
ABCNY

A New Jersey police officer accused of killing a pedestrian and then taking the victim's body to his home was allegedly driving intoxicated, according to court documents.
NEWARK, NJ・2 DAYS AGO