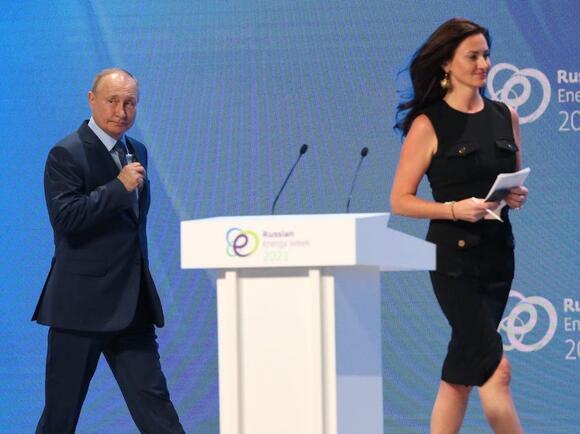 Russian President Vladimir Putin suggested to an American journalist that she was too "beautiful" to understand his explanation of Russia's standoff with Europe over gas supplies.

The CNBC journalist Hadley Gamble, who spoke to the president before a live audience at the Russian Energy Week in Moscow, was addressing the recent accusations that Russia was withholding gas supplies to Europe in an effort to drive up prices.

Her questions seemed to irritate Putin, who at one point turned to the audience and said in Russian: "Beautiful woman, pretty, I'm telling her one thing. She instantly tells me the opposite as if she didn't hear what I said," The Hill reported.

Watch the full interview here. This particular exchange can be found at the five-minute, 43-second mark:

Gamble appeared to raise her eyebrows at his response, and told Putin she "heard" what he said and that she wanted to know why Russia had taken its time to increase energy supplies, The Hill reported.

"Did I really say something so hard to understand?" he added.

Western officials have recently accused Putin of seeking to exploit the rising gas prices in the US and Europe. Russia supplies about half of the EU's natural gas imports, the BBC reported .

The construction of the Nord Stream 2 gas pipeline, which is to run from Russia to Germany, was completed last month but is still awaiting clearance from Germany's energy regulator to start operations.

After the interview with Putin, Gamble posted a photograph of a leading Russian newspaper's front page that showed her extended leg while on stage with Putin.

"My best angle #feminism #Russia," Gamble wrote in her caption.

she ain't beautiful..she jus an average white woman who has money with plastic writing all over her body..she looks like a stop sign with clothes on

Russian President Vladimir Putin threatened a Russian retaliation if the U.S. or NATO allies cross a “red line” by reinforcing Ukraine by sending certain weapons, such as hypersonic weapons, cruise missiles and missile defense systems, to which he said Russia will match. “If some kind of strike systems appear on...
MILITARY・2 DAYS AGO
Newsweek

The US says it has evidence Russia has made plans for a “large scale” attack on Ukraine and that Nato allies are “prepared to impose severe costs” on Moscow if it attempts an invasion. Speaking at a Nato ministers meeting in Latvia, the US secretary of state, Antony Blinken, said...
POLITICS・1 DAY AGO
The Independent

Why the CIA is so worried about Russia and Ukraine

The CIA discovered something scary in October: Russia was moving troops toward the Ukrainian border — and, unlike in previous border thrusts, was making secret plans about how to use them. The agency also worried that the potential conflict zone didn’t appear to be just the eastern sliver of Ukraine...
FOREIGN POLICY・2 DAYS AGO
New York Post

​Israel’s prime minister on Monday warned the five countries that have resumed negotiations over the defunct 2015 Iran nuclear deal not ​to be taken in by Tehran’s “nuclear blackmail.”. “Such a murderous regime should not be rewarded,” Israeli ​Prime Minister Naftali Bennett said in a recorded statement in which he...
MIDDLE EAST・3 DAYS AGO
The Independent

The president of Belarus has suggested his nation will take advantage of access it has to nuclear weapons via its Russian ally, should Nato decide to arm parts of Europe with similar machinery.It comes amid increasing tensions between Alexander Lukashenko and the EU over the current migrant crisis on the border shared by Belarus and Poland. Less than two weeks ago, Jens Stoltenberg, Nato’s secretary-general, announced in a statement that US nuclear weapons currently stationed inside Germany could well be moved to “other European countries” dependant on a decision about which territories leaders want them to sit in.“It is...
POLITICS・2 DAYS AGO
Business Insider

Putin warned NATO that deploying troops or advanced missiles to Ukraine would cross a "red line." The Russian leader said Moscow would be forced to take action while boasting about Russia's hypersonic missiles. Hypersonic missiles are designed to be virtually unstoppable, and can fly at least five times the speed...
POLITICS・2 DAYS AGO

The UK’s foreign secretary Liz Truss has warned Russian president Vladimir Putin against making a “strategic mistake” by launching an invasion of Ukraine.The senior minister accused Moscow of “malign activity” in the Balkans, as Nato allies gathered in Latvia to consider how to respond to Russia’s military build-up near the Ukrainian border.Suggesting the Kremlin was stirring up tensions, Ms Truss said: “We will support Ukraine and stability in the western Balkans … we will stand with our fellow democracies against Russia’s malign activity.”The foreign secretary also warned: “Any action by Russia to undermine the freedom and democracy that our partners enjoy...
POLITICS・2 DAYS AGO
The Associated Press

MOSCOW (AP) — The Russian military has deployed coastal defense missile systems near the Kuril Islands, a Pacific chain also claimed by Japan. The move appeared intended to underline Moscow’s firm stance in the dispute. The Bastion systems were moved to Matua, a deserted volcanic island in the middle of...
MILITARY・20 HOURS AGO
Business Insider

After World War II, the Soviets were looking for a main battle tank to replace the heroic T-34 tank. Over the next 15 years, the Soviets built 83,500 T-54s, and some are still in service in other countries. Russia's T-54 Tank Was a Cold War Beast: After World War II,...
MILITARY・17 HOURS AGO
Washington Examiner

Russia is demanding that the United States agree to "legal guarantees" not to expand NATO and not to deploy intermediate-range ballistic missiles in Europe. Absent that, Vladimir Putin implies that war may follow. Putin is now demanding "agreements that exclude any further NATO moves to the east and the deployment...
POLITICS・16 HOURS AGO

MOSCOW (Reuters) - Russia accused Ukraine on Wednesday of deploying half of its army or 125,000 troops to Donbass, a conflict zone in eastern Ukraine, where government forces have been battling Russia-backed separatists since 2014. The accusation was levelled by Russian foreign ministry spokeswoman Maria Zakharova during a briefing in...
POLITICS・2 DAYS AGO
Newsweek

The Kremlin said the move is a response to a U.S. announcement that 27 Russian diplomats and their families would have to leave by January 30.
POLITICS・1 DAY AGO
Reuters

MOSCOW, Nov 30 (Reuters) - Russian President Vladimir Putin said on Tuesday he had not yet decided whether to run for six more years in the Kremlin when his current term ends in 2024, while praising U.S. President Joe Biden's decision to seek re-election in that year. Putin has been...
PRESIDENTIAL ELECTION・2 DAYS AGO
Shore News Network

RIGA (Reuters) -The United States warned on Tuesday of “serious consequences” for any renewed Russian aggression as the Western military alliance NATO met to discuss Moscow’s intentions for massing troops on the border with Ukraine. U.S. Secretary of State Antony Blinken was due to brief his 29 NATO counterparts on...
POLITICS・3 DAYS AGO
gpsworld.com

The Kremlin warned it could blow up 32 GPS satellites with its new anti-satellite technology, ASAT, which it tested Nov. 15 on a retired Soviet Tselina-D satellite, according to numerous news reports. Russia then claimed on state television that its new ASAT missiles could obliterate NATO satellites and “blind all...
WORLD・3 DAYS AGO
The Associated Press

MOSCOW (AP) — President Vladimir Putin said Wednesday that Moscow would seek Western guarantees precluding any further NATO expansion and deployment of its weapons near his country’s borders, a stern demand that comes amid fears of a Russian invasion of Ukraine. Ukrainian and Western officials have worried about a Russian...
POLITICS・1 DAY AGO
Reuters

JERUSALEM, Dec 2 (Reuters) - Israel on Thursday urged world powers to halt nuclear talks with Iran immediately, citing a U.N. watchdog's announcement that Tehran has started producing enriched uranium with more advanced centrifuges. "Iran is carrying out nuclear blackmail as a negotiating tactic, and this should be answered by...
MIDDLE EAST・1 DAY AGO
The Associated Press

MOSCOW (AP) — The longtime president of Belarus said Tuesday that his country would be ready to host Russian nuclear weapons if NATO moves U.S. atomic bombs from Germany to Eastern Europe. In an interview, President Alexander Lukashenko also said for the first time that he recognizes the Crimean Peninsula...
POLITICS・2 DAYS AGO