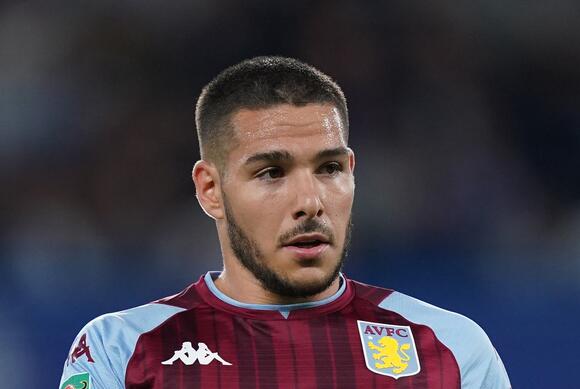 Dean Smith has backed Emiliano Buendia to prove why Aston Villa made him their record buy.

Buendia, who joined from Norwich in the summer, scored on his last start against Brentford in August but has been restricted to just 33 minutes since.

Bills boss Smith said: “We signed him because of the quality he gives us and we know what he can give us. He shows that every day in training and it won’t be long before he’s in the team.

“We have never put any pressure on trying to handle any price tag or numbers because the players aren’t in control of that. That is what someone is willing to pay for them.

“Their job is to go out and work hard every day and be ready to perform in the arena on a match day. I have seen a player there who is able to do that.

“He’s getting to where we want him to be. He got injured during pre-season so he was lacking the fitness in the first couple of games. He was getting up to speed, scored his first goal against Brentford, and then had to go off with Argentina.

“We played very well at Chelsea and decided to go with the same system and unfortunately he didn’t get the nod in the Everton game.

“He has a lot of qualities but the one I have seen over the last three or four weeks is a drive and desire to succeed. I think all players need that and he has that in abundance.”

Douglas Luiz and Emiliano Martinez will only return from international duty with Brazil and Argentina on Friday and Smith expects to have them available for the derby.

Leon Bailey remains out with a hamstring injury but he could be in contention for next Friday’s trip to Arsenal while Bertrand Traore (thigh) is being assessed and Keinan Davis and Morgan Sanson are back in training.

“We will assess whether they’re going to be available to play or not,” added Smith, on Martinez and Luiz.

“Emi played last night for Argentina, Douglas got the last 20 minutes for Brazil and we’ve also had players playing for Scotland, England, Burkina Faso, Zimbabwe – so we’ve had players all over the world.

“We want them back and we expect them to come back, then we’ll assess whether they’re ready to play or not. Martinez and Luiz are obviously the latest ones to come back but they’ll be in the squad.”

Aston Villa boss Steven Gerrard will welcome back Douglas Luiz for their clash with Crystal Palace on Saturday. The Brazilian missed Gerrard's first game in charge – a 2-0 win over Brighton last weekend – due to hamstring trouble but is set to be available for the trip to Selhurst Park, says the Daily Mail.
PREMIER LEAGUE・8 DAYS AGO
SB Nation

Talking Points: Is a European finish still in reach as Steven Gerrard inspires his Aston Villa side to a second victory as boss?

Steven Gerrard joins John Gregory as the second ever Aston Villa manager to achieve two wins from their first two games in charge, as his side defeat former midfield rival Patrick Viera’s Crystal Palace in the capital. Here are the main talking points from a highly dramatic affair at Selhurst...
PREMIER LEAGUE・4 DAYS AGO
SPORTbible

Lionel Messi emphatically denied a request from a director involving his wife ahead of winning his seventh Ballon d'Or on Monday night. Messi beat Robert Lewandowski, Jorginho and Karim Benzema to the prize, which was presented to him by former teammate and close friend Luis Suarez. Before the ceremony got...
SOCCER・3 DAYS AGO
Insider

Cristiano Ronaldo has paid tribute to Ole Gunnar Solskjaer following the Norwegian’s sacking as Manchester United coach.Solskjaer was relieved of his duties on Sunday morning, with his side having fallen to a 4-1 defeat at struggling Watford on Saturday.That result was the latest in a poor run that had included a 5-0 home thrashing by rivals Liverpool and a 2-0 derby loss to Man City.Ronaldo returned to United this summer to play under Solskjaer, who was a teammate of the Portuguese at Old Trafford between 2003 and 2007.Now the 36-year-old has bid Solskjaer a warm farewell, writing on...
PREMIER LEAGUE・11 DAYS AGO
Daily Mail

Phil Neville has jokingly claimed that Cristiano Ronaldo owes him for helping him to secure his move to Manchester United, following the superstar's destructive cameo against his current club in 2003. Casting his mind back to a pre-season friendly between United and Sporting Lisbon, then Ronaldo's team, Neville recalled to...
PREMIER LEAGUE・14 DAYS AGO
SPORTbible

Cristiano Ronaldo's former teammate is one of the surprises names on Manchester United's managerial shortlist, reports say. United are on hunt to replace Ole Gunnar Solskjaer after relieving the Norwegian of his duties following the embarrassing 4-1 defeat at the hands of Watford on Saturday. Mauricio Pochettino, Zinedine Zidane, Erik...
PREMIER LEAGUE・11 DAYS AGO
The Guardian

Clockwatch: Chelsea, Man City and Liverpool all won to keep the pressure on each other at the top of the table, while Everton fans are increasingly mutinous
PREMIER LEAGUE・1 DAY AGO

If you are already bored of the interminable debate over whether Cristiano Ronaldo is a help or a hindrance to Manchester United, bad news, this is just the beginning. It is not going away any time soon, partly because he is not going away any time soon either. Just as Old Trafford prepares to enter the gegenpressing era and even more attention is paid to what he does off the ball, he keeps winning matches with what he does on it.That might ignore some of the particular nuances in the arguments over Ronaldo’s role in this team, on both sides...
PREMIER LEAGUE・17 HOURS AGO
The Guardian

Count the Ballon d'Or as one of those grand old institutions that's insanely popular. There are several reasons for it, too. There's history: The Ballon d'Or dates back to 1956, which means it predates the European Championships, yellow and red cards, substitutions, color TV, remote controls and of course, FIFA (the video game). There's the fact that top players really, really care about winning it: Clubs mount campaigns on behalf of their star players, guys like Cristiano Ronaldo (despite already having five of these at home) get annoyed when it gets canceled (like it did last year due to the coronavirus pandemic), while Bayern Munich striker Robert Lewandowski's face lit up like a child hearing reindeer footsteps on the roof when he found out he was among the favorites.
MLS・3 DAYS AGO
Daily Mail

'He changed me as a person and a player:' Steven Gerrard pays emotional tribute to his late mentor Gerard Houllier during first press conference as Aston Villa boss ahead of Brighton

Steven Gerrard is used to fielding questions about whether he will one day succeed Jurgen Klopp, yet it is another Liverpool manager who is inspiring him as he takes his first steps as a Premier League boss. The former England captain will be on the touchline as Aston Villa manager...
PREMIER LEAGUE・14 DAYS AGO

MARTIN KEOWN: Steven Gerrard and Aston Villa could be the PERFECT union... the new boss is fearless, likeable and can help the club finally move on from Jack Grealish

Steven Gerrard and Aston Villa could be a perfect union. A young, ambitious coach who got a taste for success in Scotland taking on a famous old club with an outstanding stadium, facilities and squad to boot. Not long after he had broken into the Liverpool team, the teenage Gerrard...
PREMIER LEAGUE・13 DAYS AGO
fourfourtwo.com

New Norwich boss Dean Smith has no major injury headaches ahead of the Premier League clash against Southampton. Sam Byram is set to make a major step forward in putting his injury nightmare behind him by playing for the under-23s on Friday but the full-back, who has not played first-team football for 20 months, is still some way off a return.
PREMIER LEAGUE・14 DAYS AGO
The Independent

When Thomas Tuchel comes in after games and scans the other results, he doesn’t automatically go to Liverpool or Manchester City. At least not yet.“There are some teams behind us who show consistency, who show quality, who show determination,” the Chelsea manager said last week. “This is what it is. You have a right to be proud of your competition here, in the Premier League, and for us it feels good because we are in the middle of that race and we want to stay here. I don’t know if it will settle down.”There is a bit of a...
PREMIER LEAGUE・2 DAYS AGO
Tribal Football

Steven Gerrard has confirmed he has followed Antonio Conte's lead by banning ketchup at Aston Villa. Conte has radically transformed Tottenham's diet restrictions since taking over as manager. And Gerrard, who recently Dean Smith at Villa Park, is doing the same. Asked at his first pre-match press conference whether ketchup...
SOCCER・14 DAYS AGO
Tribal Football

Aston Villa boss Steven Gerrard paid tribute to his former Liverpool manager Gerard Houllier ahead of his Premier League coaching debut this weekend. Houllier was the Liverpool manager who turned Gerrard from a promising young player into one of the Premier League's top midfielders and Gerrard's love and respect for the Frenchman were clear to see. Houllier, who passed away on December 14 last year, aged 73, was Villa manager from 2009-10 but stepped down due to ill health.
PREMIER LEAGUE・14 DAYS AGO
Tribal Football

Leicester City manager Brendan Rodgers has sympathised with Steven Gerrard after his decision to leave Rangers for Aston Villa. Rodgers made a similar move back in 2019 when he departed Celtic for Leicester. And the Northern Irishman is confident that Gerrard, who he coached at Liverpool, will succeed at Villa...
PREMIER LEAGUE・14 DAYS AGO
Tribal Football

Steven Gerrard has revealed he has been contacted by Liverpool boss Jurgen Klopp since taking over at Aston Villa. Reds legend Gerrard recently replaced Dean Smith as manager at Villa Park. He will return to Anfield to face his former club on December 11. Speaking about facing Klopp, Gerrard said:...
PREMIER LEAGUE・14 DAYS AGO