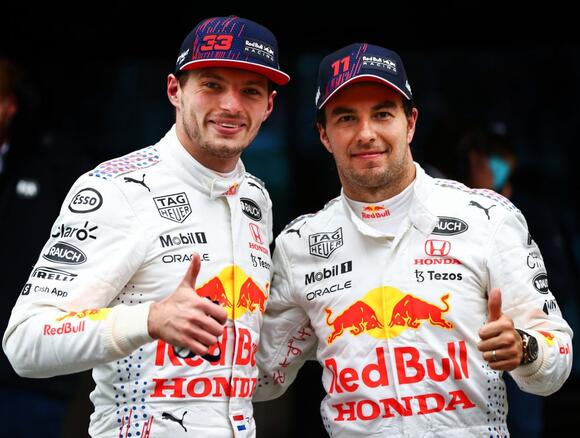 Red Bull racer Sergio Perez has praised the all-round ability of his team-mate Max Verstappen , saying he can’t pick out a single weakness in his approach.

The Mexican joined his current team from Racing Point - now Aston Martin - for this season and has performed largely well recently, winning the Azerbaijan Grand Prix and clocking up 135 championship points to lie in fifth in the driver standings, with six rounds to go.

He also earned the acclaim of Verstappen recently after holding off Lewis Hamilton at the Turkish Grand Prix , finishing third in the process with his Dutch team-mate in second, Verstappen then leap-frogging Hamilton to the top of the driver standings.

But Perez has pointed out that Verstappen being such a natural and so at-ease with the Red Bull car has both positives and negatives, as he deals with his own acclimatisation period after switching to the team.

“It’s not easy being Max’s team-mate because he’s at one with the car,” said Perez. “He’s really delivering at a very high level.

“I had a difficult process to adapt to the car, but nothing too dramatic. It’s obviously a very good package and a very competitive one and Max is showing that this car is, if not the best, one of the best out there.”

Expanding further on how good he thinks Verstappen is, Perez didn’t hold back in his praise, saying he makes the fewest errors on the grid and saying he has “been the driver of the season so far”.

“I think he has done the least mistakes of anyone out there. He’s put things together at a very high level.

“The season, it’s still very long so we’ll see later on, so far I have been surprised in a very positive way on how he delivers without mistakes at such a high level.”

“I’ll have to think about it [if he has any weaknesses], but I don’t really think there are. Not obvious ones, yet.”

Kimi Raikkonen has said Lewis Hamilton and Max Verstappen’s rivalry has been unnecessarily turned into a “big story”.Defending champion Hamilton trails Verstappen by eight points in the Formula 1 drivers’ standings with two races left this season.The Briton and the Dutchman have clashed on the track more than once this season, but 2007 world champion Raikkonen has said the pair’s rivalry is nothing unusual for a title race.“[It is] less [intense], for sure, because I’m not involved,” the Finn said, per GP Fans.“For me, it doesn’t matter. Whoever has the most points at the end of the last race...
MOTORSPORTS・5 DAYS AGO
Insider

Lewis Hamilton has gone from seemingly without a hope to the man in pole position to secure this season's drivers world championship.
MERCEDES, TX・13 DAYS AGO
SkySports

After eight months of drama, unpredictability and increasing tension, 2021's world champion will either be crowned at this week's inaugural Saudi Arabian GP - where Verstappen could clinch his maiden crown if Hamilton endures a difficult weekend - or at next week's season finale in Abu Dhabi in what could prove a winner-takes-all showdown.
MOTORSPORTS・6 DAYS AGO
The Independent

The Formula One title might not just be dictated by the two in the running to claim victory overall, but by their team-mates, Martin Brundle says.Lewis Hamilton and Max Verstappen are fighting it out for supremacy at the top of the standings, the Dutchman leading by eight points with two races to go in Saudi Arabia and Abu Dhabi.But how well their partners perform - and directly manage to hold off the No1 racers - is going to have a telling impact, according to Brundle, who backs Mercedes man Valtteri Bottas to fare better than Red Bull’s Sergio Perez.“I honestly...
MOTORSPORTS・3 DAYS AGO

Lewis Hamilton expresses that he is living in constant fear in the event he misses races with the possibility of contracting COVID-19 amid his F1 title fight with Max Verstappen. Heading into the first-ever Saudi Arabia F1 Grand Prix, Hamilton and Verstappen are separated by a mere 8 points. With...
MOTORSPORTS・5 DAYS AGO
The Guardian

Who took over? Who walked away? Who kept going?
TENNIS・2 DAYS AGO
dallassun.com

Lewis Hamilton insists he has no time to celebrate back-to-back wins as he stormed to victory at the Qatar Grand Prix to move eight points behind title rival Max Verstappen. With arguments, press conference sideshows, grid penalties and questions over even racing in a country with a poor history of human rights dominating the build-up to Sunday’s race, it was Hamilton who put on a show under the floodlights at the Losail International Circuit.
MOTORSPORTS・14 DAYS AGO

Max Verstappen’s title charge took a blow as the Formula One championship leader was hit with a five-place grid penalty at the Qatar Grand Prix after ignoring yellow flags during Saturday’s qualifying session. The Red Bull driver was set to start second on the grid alongside title-rival Lewis Hamilton who...
MOTORSPORTS・14 DAYS AGO
The Ringer

Max Verstappen Has the Formula One Title Lead. But Lewis Hamilton Isn’t Done Yet.

Two weeks ago, Max Verstappen seemingly had one hand on his first Formula One drivers championship trophy. Now, two races later, he’s watching it slip away. The F1 traveling bazaar is in the home stretch: After buzzing around Europe all summer, the series recently kicked off a slate of six races in eight weeks in the Americas and Middle East. Verstappen started things off by winning the United States Grand Prix, holding off a charging Lewis Hamilton at a track the 36-year-old Englishman had traditionally made his own. (The all-time F1 scoreboard at Texas’s Circuit of the Americas reads “Hamilton 5, Everyone Else 4.”)
MOTORSPORTS・13 DAYS AGO
ClutchPoints

After strong Mexico and Brazil Grand Prix performances, Sergio Perez lucked out at the F1 Qatar Grand Prix and failed to qualify past Q2, only managing 11th place on the grid for the main race. Prior to the qualifying session, Perez didn’t have particularly good practice sessions, nor was it...
MOTORSPORTS・14 DAYS AGO
The Independent

Max Verstappen has revealed winning the Formula One world title is his “final goal” in the sport and admitted it would not “matter” if he didn’t add another championship in his career. The Dutchman leads title rival Lewis Hamilton by eight points heading into the Saudi Arabia Grand Prix next weekend, which is the penultimate race of the season. Verstappen therefore has the opportunity to win his first world championship in Jeddah if the 24-year-old outscores Hamilton by 18 points, as the Mercedes driver would be unable to overhaul the Red Bull’s lead at the season-ending Abu Dhabi Grand...
MOTORSPORTS・11 DAYS AGO

Barcelona head coach Xavi has poured water on claims that Sergio Aguero will announce his retirement from football next week following his cardiac arrhythmia diagnosis. Aguero was forced to leave the pitch in Barça's 1-1 draw with Deportivo Alaves with chest pains, and was initially advised by doctors to rest for the next three months.
SOCCER・14 DAYS AGO
ClutchPoints

FIA president Jean Todt honestly compares F1 stars Max Verstappen and Kimi Raikkonen. Raikkonen, known as one of the most admirable personalities in F1, also won a title in 2007 in a close fight against Lewis Hamilton and Fernando Alonso, which was decided on the last race day of the season. Meanwhile, Verstappen is aiming for his first-ever F1 title while leading by 8-points against Mercedes’ Lewis Hamilton—triggering a response from Todt.
MOTORSPORTS・9 DAYS AGO
buckinghamshirelive.com

Red Bull ace Max Verstappen has called for changes to be made in the Formula 1 regulations in regards to engine penalties, which have taken centre stage in recent weeks. The rules state that drivers are limited to a set number of each component that can be used during the course of the season and penalties are issued for any other changes beyond that.
MOTORSPORTS・9 DAYS AGO
ClutchPoints

Formula 1 legend Ralf Schumacher is certain Mercedes driver Lewis Hamilton has the advantage over archrival and Red Bull’s Max Verstappen in the final races of the season. The current Formula 1 season is now down to two final races. Seven-time world champion Lewis Hamilton is coming off back-to-back wins and will be hoping to carry the momentum to the Saudi Arabian Grand Prix.
MOTORSPORTS・12 DAYS AGO
racingnews365.com

With 22 races in the 2021 Formula 1 season, it can be difficult to remember the layouts of the circuits that the sport visits. Red Bull decided to put Max Verstappen, Sergio Perez and Alex Albon to the test at last weekend's Qatar Grand Prix. Find out who has the...
MOTORSPORTS・9 DAYS AGO
The Independent

The head of the Mercedes-AMG Petronas Formula One racing team apologized Friday for the way the team announced its partnership with a company involved in a London high-rise where a fire killed 72 people.The team announced a sponsorship deal this week allowing building products maker Kingspan to put its logo on the nose cone of world champion Lewis Hamilton’s car beginning with a weekend race in Saudi Arabia. Survivors and family members of the people who died in the 2017 Grenfell Tower fire immediately condemned the deal and asked the team to sever its ties with Kingspan. The fire...
MOTORSPORTS・2 DAYS AGO
ClutchPoints

F1 star Max Verstappen shares his ultimate goal for his career amid his intense title race with Mercedes’ Lewis Hamilton. Sporting a narrow 8-point lead, Verstappen might have left the door open for seven-time F1 champion Lewis Hamilton, after the latter won the last two races in Brazil and Qatar, respectively. The 24-year old entered F1 back when he was just 17 years old, marking the youngest ever competitor in the sport’s history.
MOTORSPORTS・11 DAYS AGO
ClutchPoints

F1 star Max Verstappen is sporting an insane net worth despite being only 24-years old, which can be too young for others to have that much money. A reason for the young driver’s abundance of accumulated money could stem from the fact that he started pretty early. As it stands, Verstappen is the youngest driver to start at an F1 race at the 2015 Australian Grand Prix, while he was 17 years, 166 days, at the time.
MOTORSPORTS・8 DAYS AGO