Could Johnson & Johnson's Booster Opportunity Be Better Than Pfizer's and Moderna's? 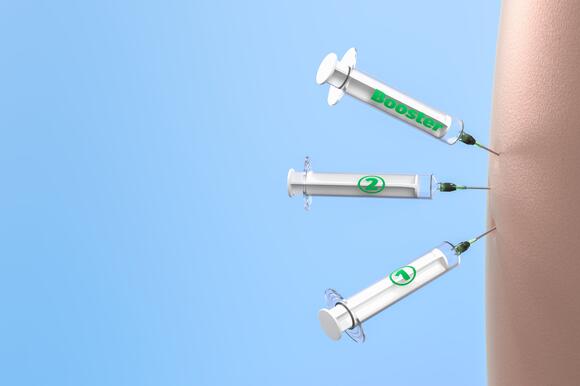 Pfizer (NYSE:PFE) has already won authorization to inoculate people with boosters of its COVID-19 vaccine, albeit thus far, only those in certain higher-risk groups. Moderna (NASDAQ:MRNA) and Johnson & Johnson (NYSE:JNJ) will now have their first chance to join it with a Food and Drug Administration advisory committee reviewing data for their boosters. In this Motley Fool Live video recorded on Sept. 22, 2021, Motley Fool contributors Keith Speights and Brian Orelli discuss whether or not Johnson & Johnson's booster shot opportunity could be greater than Pfizer's or Moderna's.

Keith Speights: There's another big story this week on the COVID-19 vaccine front, and this one is from Johnson & Johnson. On Tuesday, Johnson & Johnson announced real-world data, along with phase 3 results, for a single-shot COVID vaccine. However, the big story, I think, was that company also reported data from a booster shot of its vaccine.

Brian, what were the main takeaways you think from J&J's results? Do you think Johnson & Johnson could even have a better chance at winning FDA and CDC authorization for a booster than either Pfizer or Moderna?

Brian Orelli: Yeah, the booster data was both promising and a little confusing. It offered 100% protection against severe disease. That's obviously the big positive. But then, if you look at moderate-to-severe disease, the data gets a little confusing. It was 75% efficacy globally, and then, if you look just specifically at the United States, it was at 94%.

I don't know, we'll have to wait and see, look at the full data from Johnson & Johnson to see how many were in the U.S., how many were outside the U.S., to try to figure out that difference between 94% in the U.S. and then 75% globally, which includes the U.S.

Since the Johnson & Johnson efficacy started at a lower level than Pfizer and Moderna's vaccines, I think that means there's a lower barrier to get an approval for a second dose, assuming the data pans out and it justifies the higher efficacy. But yeah, I would agree that it's probably an easier road for Johnson & Johnson than for Pfizer and Moderna.

Speights: That's what I was thinking too, Brian, that just because of that bar being lower for J&J, that the company could have an easier path to getting authorization for boosters. Again, we'll have to wait and see what happens. But that seems to be a pretty good argument there, I thought it was. I thought Johnson & Johnson's data for its single-shot vaccine was still pretty good though. That will have a bearing as well.

Orelli: I think the FDA was looking for 50% efficacy before we got any data, so 70% looks good on the range of "50% is acceptable." But in the range of 90% for Moderna and Pfizer, then 70% doesn't look so good. I think that makes it easier for them to get this booster.

Speights: I haven't heard anything from Johnson & Johnson on this, but I assume that the company would still sell boosters at cost as it's done for its single-shot vaccine.

Orelli: So I guess [if] we're holding them to that, what they said earlier then, yes, that will be the case.

Speights: The closest I've heard is that I think the country of Malaysia is planning to change its labeling to endemic sometime in October. So, there you go.

Why Vaccine Stocks Like BioNTech and Novavax Are Crashing Today

The global war against COVID-19 has changed over the course of the past week -- and changed dramatically just this past weekend.
MEDICAL & BIOTECH・22 HOURS AGO
The Motley Fool

Why Reata Pharmaceuticals Nose-Dived on Monday

The FDA has raised concerns about one of the company's key pipeline candidates in advance of a crucial meeting.
MEDICAL & BIOTECH・21 HOURS AGO
The Motley Fool

Why Moderna Stock Is Rising Today

Investors liked the encouraging results from a study conducted by the University of Oxford.
STOCKS・1 HOUR AGO
CBS News

CEOs and scientists on whether existing vaccines will work against Omicron

As cases of the Omicron variant continue to rise across the U.S., public health officials have one main question: Are the current COVID-19 vaccines from Moderna, Johnson & Johnson and Pfizer effective against the new variant?. For now, no one truly knows the answer. However, the CEOs of Moderna and...
INDUSTRY・6 HOURS AGO

(Reuters) - A major British study into mixing COVID-19 vaccines has found that people had a better immune response when they received a first dose of AstraZeneca or Pfizer-BioNTech shots followed by Moderna nine weeks later, according to the results on Monday. "We found a really good immune response across...
PUBLIC HEALTH・19 HOURS AGO
nbcboston.com

What Are the Side Effects of the Pfizer, Moderna COVID Booster Shots?

With the emergence of the rapidly spreading omicron variant, COVID-19 booster shots are now strongly recommended by the Center for Disease Control and Prevention. "Everyone ages 18 and older should get a booster shot ... when they are six months after their initial Pfizer or Moderna series," CDC Director Dr. Rochelle Walensky said in November.
PUBLIC HEALTH・5 HOURS AGO
The Motley Fool

What This Label Expansion Means for Pfizer

Gilead Sciences is facing multiple headwinds, but there may be hope for the biotech company.
INDUSTRY・5 HOURS AGO

Glaxo and Vir Biotechnology’s Antibody Drug Works Against Omicron, Study Suggests: Should You Buy the Stocks?

8 Beaten-Down Pharmaceutical Stocks That Could Skyrocket In 2022

These eight stocks could rebound nicely over the next year and beyond.
MEDICAL & BIOTECH・4 HOURS AGO
The Motley Fool

A positive clinical readout is lighting a fire underneath the biotech's shares today.
STOCKS・5 HOURS AGO
FOX 5 San Diego

Moderna or Pfizer? Study finds one is slightly more effective

The results of the study were published in the New England Journal of Medicine this week.
SAN DIEGO, CA・1 DAY AGO
Motley Fool

Johnson & Johnson is a stalwart stock that could be a good anchor for many portfolios. Shiba Inu is an exciting cryptocurrency because it seemed destined to hit the moon this year. If you have a rationale for an investment, make sure that the rationale is a valid one. Johnson...
STOCKS・1 DAY AGO
KRLD News Radio

Mixing and matching COVID-19 vaccines boosters might give people more protection from the virus and potential future variants. A new study suggests that using the Johnson & Johnson vaccine as a booster may do just that.
INDUSTRY・1 DAY AGO
The Motley Fool

Why Shares of Pfizer, Ocugen, and Vaxart Are Losing Ground Today

The initial data on omicron suggests that the pandemic has entered a new, less deadly phase.
MEDICAL & BIOTECH・1 DAY AGO
Benzinga

Johnson & Johnson (NYSE: JNJ) announced preliminary results from an independent study, including a subset of the Janssen-sponsored COV2008 study participants. The article describing these results has been posted on medRxiv. The study showed a booster shot of the Johnson & Johnson COVID-19 vaccine, administered six months after a two-dose...
MEDICAL & BIOTECH・1 DAY AGO
MLive

Why Moderna Is the Biggest Winner From COVID Boosters So Far

Some Americans could prefer Moderna's booster because of perceptions that it offers higher efficacy.
PUBLIC HEALTH・2 DAYS AGO
CNET

COVID booster and omicron: Find out fast if your pharmacy has Moderna or Pfizer

For the most up-to-date news and information about the coronavirus pandemic, visit the WHO and CDC websites. Bringing COVID booster shots of Moderna or Pfizer to the more than 100 million people in the US who are eligible to receive it is a top priority for the US government and Centers for Disease Control and Prevention. The good news is, a convenient one-stop service brings you information on vaccine and COVID booster availability near you, an appointment and maybe even a free ride. All you have to do is text.
PUBLIC HEALTH・1 DAY AGO