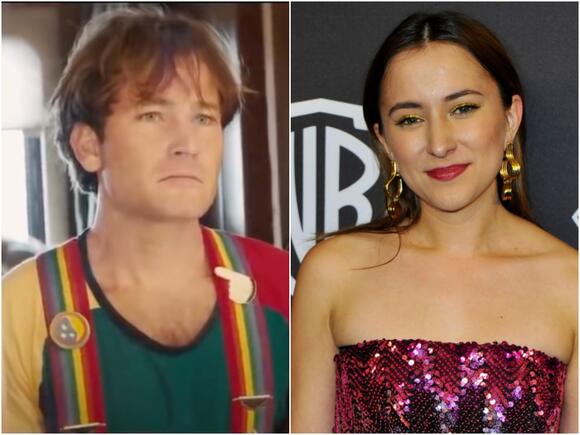 Zelda Williams asked fans on Twitter to stop sending her videos of an impersonator of her father, Robin Williams.

Earlier this week, actor Jamie Costa published a five-minute video entitled "ROBIN Test Footage Scene" where he plays the late comedian receiving news of the death of his friend, Jim Belushi. The scene replicates Williams on March 5, 1982, when his "Mork & Mindy" co-star, Pam Dawber (portrayed in the video by Sarah Murphree) tells him the news of Belushi overdosing. Belushi's overdose occurred hours after he was hanging out with Williams.

Costa's clip has since gone viral, receiving almost 5 million views on YouTube at the time of writing. On Tuesday, when the video was first published, Zelda Williams had to plead with fans to stop sending the video to her.

"Guys, I'm only saying this because I don't think it'll stop until I acknowledge it," she wrote. "Please, stop sending me the 'test footage'. I've seen it. Jamie is SUPER talented, this isn't against him, but y'all spamming me an impression of my late Dad on one of his saddest days is weird."

One fan responded with: "Maybe it's not meant to be cruel or rude. Or promote sadness. A lot of us regular people loved your Dad, for many, many, reasons. If that clip stops one person from doing drugs, I say it's a win/win. Love and light to you."

To this, the "Dead of Summer" star replied: "I said nothing about cruel or rude. The clip made me uncomfy so I was asking kindly for folks to stop sending it to me over and over."

"Your love for Dad doesn't mean I have to tolerate being bombarded in silence, and being projected upon can be pretty exhausting some days," she added.

Costa's video now has fans calling for a full biopic about the beloved comedian. Robin Williams committed suicide in 2014 after suffering from Lewy body dementia.

Zelda Williams, who is also an actor, is one of Williams' three children and has paid tribute to her dad on numerous occasions, including sharing touching photos of him on social media that she had unearthed last year. Her brother, Zak Williams, also bonded with Prince Harry earlier this year over their "shared experience" with public grief.

On yesterday's episode of 'Live with Kelly and Ryan,' morning show host Kelly Ripa recounted the time her daughter, Lola Consuelos, walked into her and her husband's room and was surprised by what she found.
1 DAY AGO
musictimes.com

Madonna graced the 2023 Grammy Awards stage on Sunday to present another singer's performance. However, she quickly shared a speech to the crowd and those watching from home. The "Material Girl" singer told everybody, "I'm here to give thanks to all the rebels out there, forging a new path and taking the heat for all of it."
2 DAYS AGO
Insider

Tom Brady shared a photo of himself wearing just underwear on his Instagram page. The shot was promoting his new lifestyle brand.
1 DAY AGO
Insider

Madonna responds to criticism about her face following Grammys appearance: 'I'm caught in the glare of ageism and misogyny'

In her latest Instagram post, Madonna hit back at critics who said her face is unrecognizable due to plastic surgery.
1 DAY AGO
Insider

Ashley Leechin is sharing her story to prove she's not a "pathological liar" and as a cautionary tale for other creators.
1 DAY AGO
The US Sun

AMERICA'S Got Talent magician Scott Alexander has died after suffering a stroke while working on a cruise ship. Scott's wife Jenny, who appeared on the reality TV show as his assistant, took to Instagram on Monday and informed fans about her husband's sudden death at the age of 52. Alongside...
PENNSYLVANIA STATE・1 DAY AGO
Insider

Hayek Pinault told GQ Hype that the male dancers and crew members were lifting weights in between takes on the set of "Magic Mike's Last Dance."
2 DAYS AGO
Showbiz Cheat Sheet

The guessing game about the identity of Prince Harry's "older woman" lover who he wrote about in 'Spare' is over. But it wasn’t all games for her and her family.
2 DAYS AGO
Insider

"In the final scene, they don't even kiss," comedian Andrew Schulz said on his "Brilliant Idiots" podcast. "It's CGI. Swear to god."
2 DAYS AGO
Insider

A woman said having a child made her realize she loved her dog as much as her baby, sparking a debate on TikTok

"Why do people feel attacked by someone loving their dog the maximum amount?" a top comment read. "We shouldn't be putting a limit on love."
1 DAY AGO
Insider

From performance mishaps to Adele's reaction to his win, Harry Styles' presence at the Grammys has been mired in speculation from viewers.
19 HOURS AGO
Insider

Paul Rudd says Marvel had to 'tone down' his 'Ant-Man 3' fight with Kang: 'I was so beat up that if I had a headshot, you wouldn't be able to tell'

Mila Kunis has shared her thoughts on "Your Place of Mine" stars Reese Witherspoon and Ashton Kutcher's red carpet chemistry, or lack thereof.
CALIFORNIA STATE・2 DAYS AGO
Insider

"This person has no goddamn manners," said TikToker MyFriendsCallMeTbone in a storytime. "Like, there is no way that she does not know my name."
19 HOURS AGO
Insider

9 details you probably missed at the Grammys

From Bad Bunny performance nods you didn't catch to possible Easter eggs in Taylor Swift's accessories, here are details you missed at the Grammys.
LOS ANGELES, CA・2 DAYS AGO
Insider

Celebrities like Beyoncé and Shania Twain gathered for the 2023 Grammy Awards on Sunday. Some looks were too casual, while others were overwhelming.
LOS ANGELES, CA・2 DAYS AGO
Insider

Vanity Fair reshared their lie-detector interview with Lizzo after she won the record of the year Grammy award on Sunday.
2 HOURS AGO
Insider

Lizzo 'hard launched' boyfriend Myke Wright on Instagram. Here's everything we know about the singer's new significant other.

Grammy-award-winning singer Lizzo took to Instagram on Sunday to post a photo of her boyfriend, Myke Wright, an actor and comedian.
2 DAYS AGO
Insider

"Ant-Man and the Wasp: Quantumania" writer Jeff Loveness said he thought of '90s dad movies when writing Ant-Man's relationship with his daughter.
2 DAYS AGO