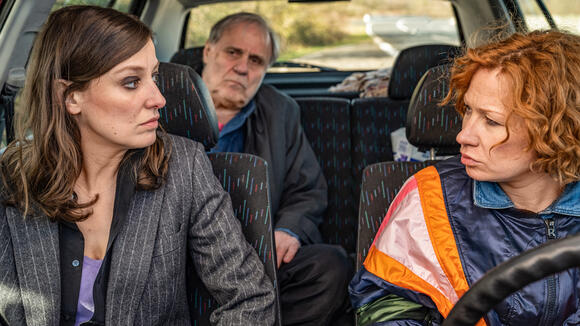 Cologne-based The Match Factory , one of the world’s leading arthouse sales agencies, is at MIA Market in Rome with two German features and one upcoming Italian project, following a busy summer with 20 premieres between Cannes and Toronto.

Nana Neul, best known for her film “My Friend From Faro,” is back with an entertaining German-Italian-Greek feature “Daughters,” starring Birgit Minichmayr, Alexandra Maria Lara and Josef Bierbichler. Produced by Germany’s Heimatfilm and distributed by Warner Bros Germany, the comedy hit German cinemas last week and has its international market premiere at MIA on Friday. The international festival premiere will follow soon.

Andreas Kleinert’s “Dear Thomas” is an authentic portrait of Thomas Brasch, one of the most talked about German authors of the last 50 years. The film stars the German actor Albrecht Schuch from “System Crasher,” “Berlin Alexanderplatz” and “Fabian: Going to the Dogs.” It celebrated its world premiere in Munich in June and screened recently at the Hamburg Film Festival. The international premiere will be announced soon. The film screened to the buyers at MIA on Thursday.

Under the umbrella of the upcoming projects What’s Next Italy, produced by the long-time partner Vivo Film in Italy, The Match Factory presents “Il Pataffio” by Francesco Lagi at MIA. The feature promises to be “a very Italian, funny and daring Middle Age tale about hunger and freedom, sex and power,” said The Match Factory.

Sergei Loznitsa’s extensive documentary “Mr. Landsbergis,” clocking in at 246 minutes and depicting Lithuania’s “singing revolution” when the country finally broke away from the Soviet Union, has won the Best Film award in the International Competition section, as well as €15,000, at documentary film festival IDFA in Amsterdam. It marks...
MOVIES・5 DAYS AGO
Variety

For the upcoming 43rd edition of the Cairo Film Festival, which is the grande dame of Arab film events, fest chief Mohamed Hefzy and his team have assembled a rich mix of top notch Arab and international titles, including the world premiere of Tunisian star Dhafer L’Abidine’s directorial debut “Ghodwa” and the MENA (Middle East and North Africa) premiere of “House of Gucci.”
WORLD・4 DAYS AGO
Variety

Over the course of a celebrated 40-year career, veteran Danish editor Niels Pagh Andersen has worked on critically acclaimed films including Pirjo Honkasalo’s “The 3 Rooms of Melancholia” and Joshua Oppenheimer’s Oscar-nominated “The Act of Killing” and “The Look of Silence.” One of the key takeaways from those collaborations, which he explores in his new book “Order in Chaos: Storytelling and Editing in Documentary Film,” is the importance of the creative synergy that forms between an editor and a filmmaker. “The artistic vision is the director’s responsibility. But with the [editing] process, there I feel it’s also my responsibility that we get...
MOVIES・2 DAYS AGO
heyuguys.com

The recent emergence of streaming services has been a boon for film fans eager to catch the latest releases, as well as dive into a curated selection of classic cinema. Having access to some of the greatest films & TV of all time is the stuff of dreams for those of us who remember the never-ending shelves at our local video store. And now there’s a new (well-known, much loved) name that is setting up their stall.
TV & VIDEOS・12 DAYS AGO

I had no idea what the term ‘binaural’ meant so I was pleased to see it defined on the Factory Theatre website. Lisa Codrington’s ‘Cast Iron’ is billed as a binaural audio drama meaning that directional sound is used during the performance. To attain the full audio experience, the team at Factory and Obsidian recommend that listeners use headphones during the performance. I didn’t have headphones, so I had to rely on the earbuds through my iPhone.
THEATER & DANCE・12 DAYS AGO
bloody-disgusting.com

Here Before, a Belfast-set psychological thriller from Stacey Gregg, has its World Premiere at the SXSW Film Festival this past March. Now, Saban Films has come in and acquired North American rights to the film that Meagan says, “dissolves reality with simplistic mystery.” Read her review here. In the previously...
MOVIES・11 DAYS AGO
Deadline

Next year’s International Film Festival Rotterdam (IFFR) will be home to a new art installation from Oscar-winning filmmaker Steve McQueen. Titled Sunshine State, the installation was commissioned by the festival and will see McQueen fill the event’s central venue, the Kunsthal, with both sound and image. It will open to the public on January 27 and will run until February 13. This is the filmmaker/artist’s first new installation since his major commission Year 3 at Tate Britain in 2019. This year’s IFFR will also feature artistic performances from Angolan multidisciplinary artist Kiluanji Kia Henda and Taiwanese artists Su Hui-Yu and Cheng Hsien-Yu. “We are beyond thrilled to announce the world premiere of Steve McQueen’s latest installation during the next edition of IFFR,” said Festival director Vanja Kaludjercic. “McQueen is a visual artist and celebrated filmmaker who is known for his powerful and uncompromising vision and we are proud to offer a broad audience the opportunity to experience this newly commissioned work at Rotterdam’s cultural landmark Kunsthal. We look forward to welcoming McQueen at the festival to celebrate contemporary cinema and cinematic art together with us in Rotterdam.” IFFR 2022 will run January 26 – February 6. The program will be unveiled on December 20.
VISUAL ART・6 DAYS AGO
SFGate

The next generation of Singaporean filmmakers are displaying the rich tapestry of the city-state’s culture at the Southeast Asian Film Lab, which is part of the Singapore Media Festival. Shopping malls are an intrinsic part of Singaporean culture and for Dewi Tan, who is from an anthropology and environmental science...
MOVIES・5 DAYS AGO

The traditional awards ceremony held at the Estonian National Opera wrapped up the 25th edition of the Tallinn Black Nights Film Festival on Saturday 27 November. This year’s festival, which unspooled in the Estonian capital from 12-28 November, offered a rich programme consisting of 179 features (including 34 world, 32 international and 11 European premieres), 244 shorts through its PÖFF Shorts strand, and 18 series through its dedicated TV Beats initiative.
MOVIES・2 DAYS AGO
cineuropa.org

Francesco Sossai • Director of Other Cannibals

This year's Tallinn Black Nights Film Festival hosted the screening of the first feature by Italian director Francesco Sossai. Other Cannibals. is an intimate, black-and-white drama about two singular protagonists and provides an original outlook on the theme of cannibalism. We spoke to the director about his inspiration, his characters and the visual concept of the movie, which walked away from the gathering with the Best First Feature Film Award (see the news).
MOVIES・2 DAYS AGO
Variety

‘Revolution of Our Times,’ ‘The Falls’ Triumph at Golden Horse Film Awards

“The Falls,” Taiwan’s Oscar contender and a timely drama about the trauma of home quarantine, emerged as the unsurprising winner at the Golden Horse Film Awards in Taipei on Saturday. And, in a bold decision that has the potential to enrage Mainland Chinese authorities, the prize for best documentary feature...
MOVIES・3 DAYS AGO
Variety

U.K.-French sales, distribution and production company Alief has dealt Gonzalo Calzada’s award-winning Argentine thriller double bill “Nocturna” in France and Belgium to horror-centric streaming platform Freaks On. Freaks On plans to release the film early next year, day-and-date on its platform, in select theaters and in physical media. As envisioned by Argentine writer-director Gonzalo Calzada, “Nocturna: Side A…” turns on a nearly 100-year-old man who struggles to atone for the transgressions he has committed in his life. In “Nocturna: Side B…,” Calzada explores an experimental version of the same story. “’Nocturna’ is inspired by my grandparents and the type of relationship they had...
MOVIES・1 DAY AGO

Muse Entertainment Enterprises has tapped film and TV vet Alex Jordan to serve as its new senior VP of production. Jordan, who starts on January 1, will be based in Toronto and focus on producing programming for the international market. Jordan most recently served as a producer on Paramount Plus’ “Mayor of Kingstown.” He also worked on feature “Between Waves,” which was released this summer. His other credits include working on series such as “Nikita,” “Transporter,” “Rogue” and “Private Eyes.” “Alex has a track record of producing great shows, and I look forward to having such a respected and talented leader in...
BUSINESS・1 DAY AGO
Variety

The tumultuous events surrounding the making of Bernardo Bertolucci’s 1973 film “Last Tango in Paris” will be the subject of a limited series to be co-directed by Lisa Brühlmann (“Killing Eve”) and José Padilha (“Narcos”). The series, titled “Tango,” is part of the international first-look agreement between CBS Studios and Stampede Ventures, an independent entertainment media company founded by former Warner Bros. Pictures president Greg Silverman. The series, set in Italy, France and the U.S., written by Jeremy Miller and Daniel Cohn, will span the 18 months before, during and after the production of “Last Tango in Paris,” and will be told...
MOVIES・1 DAY AGO
Variety

The 31st annual edition of the Gotham Independent Film Awards, taking place Nov. 29, will feature a variety of updates, including acting awards that are not defined by gender, a kudo for breakthrough nonfiction series and the inclusion of international documentaries in the doc feature category. The third new rule allowed for two European-based documentaries to be nominated in Gotham’s feature nonfiction category: Jonas Poher Rasmussen’s “Flee” and Camilla Nielsson’s “President.” Rounding out the Gotham category are three U.S.-based docus — Jessica Beshir’s “Faya Dayi,” Jessica Kingdon’s “Ascension” and Ahmir “Questlove” Thompson’s debut, “Summer of Soul (…Or When the Revolution Could...
MOVIES・1 DAY AGO
Variety

Fernando Díaz’s Machaco Films and Roxana Ramos’ Aramos Cine have partnered to set up a joint venture: La Puerta Roja, focused on horror and fantasy movies as well as working with prominent genre directors from Ibero-America. Both companies are based in Buenos Aires. The idea sprang from Machaco and Aramos’s co-production partnership on Demian Rugna’s next project “When Evil Lurks.” Machaco had already produced Rugna’s “Terrified,” awarded at the Austin Fantastic Fest among a flurry of international kudos, and whose remake rights were acquired by Guillermo del Toro. A cinema-TV production company, Machaco Films was founded over 20 years ago. Productions include...
MOVIES・1 DAY AGO
Variety

In Dec. 2018, two years after he had picked up “Ainbo: Spirit of the Amazon” at the first edition of Ventana Sur’s Animation!, Edward Noeltner’s Cinema Management Group (CMG) announced he had pre-sold it to over half the planet. Further deals followed with Signature for the U.K. and Rialto for Australia/New Zealand. Even before COVID-19 struck, independent movies’ worldwide sales roll-outs were getting increasingly rare. It’s one thing, moreover, for titles to sell, another for them to register any kind of real impact at the box office. But in 2021, despite theater closures and COVID-19 protocols, “Ainbo: Spirit of the Forest” looks...
MOVIES・16 HOURS AGO
Variety

GREENLIGHT Starzplay has greenlit a six-episode second season of hit travel documentary series “Men in Kilts: A Roadtrip with Sam and Graham,” featuring “Outlander” stars Sam Heughan and Graham McTavish. They will hit the road again, this time in New Zealand. Developed by Heughan and McTavish, the original series is produced by Boardwalk Pictures, in association with Sony Pictures Television. Heughan and McTavish conceived the original idea and serve as executive producers alongside Alexander Norouzi, Andrew Fried, Dane Lillegard, Sarina Roma and Kevin Johnston who also serves as director. The first season saw Heughan and McTavish having an adventure in Scotland. SALES Keshet International has...
TV SERIES・13 HOURS AGO