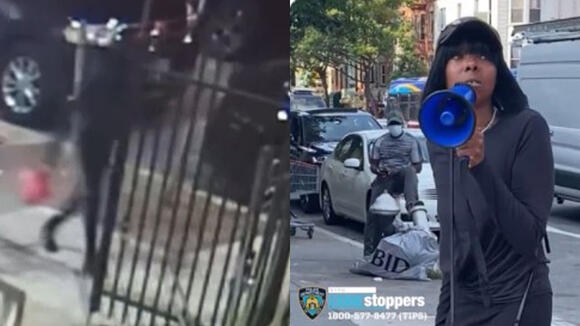 Police in Brooklyn are searching for a woman who was caught on camera lighting a Jewish school on fire. They believe she may be a mentally ill woman seen in the area. It happened on Thursday at 7:27 p.m. at the Yeshiva of Flatbush on Avenue J. The woman can be seen dressed all in black and carrying a red gasoline can. WATCH | Arson suspect caught on surveillance camera

Police release new video of the woman caught on camera dousing a Brooklyn Yeshiva with gasoline and lighting it on fire.

Police say she walked up to the Yeshiva, doused the area in gasoline, and lit it on fire. A security guard inside the school saw what was going on and he was able to put out the fire with water. The woman is described as approximately 5'4" tall, with an average build, dark hair and wearing all dark-colored clothing, black shoes, and carrying a red gasoline canister. NYPD Hate Crimes Task Force is investigating the fire, but detectives suspect the woman may be a mentally ill resident who lives nearby, so it is not clear if the case will remain a bias crime. They are also investigating whether the woman captured on surveillance is the same woman spotted shortly before the fire, carrying a red gas canister and yelling through a megaphone, on Nostrand Avenue and Ave J. Fortunately, no one was injured in this incident. Yeshiva of Flatbush Rabbi Joseph Beyda believes the incident could be teachable moment for the students. "I think you're, you're right to say it's a teachable moment for all of us, and of what kind of city we want to have, and what it takes to educate, so, yeah," he said. Midwood is said to be home to the largest community of Holocaust survivors outside the state of Israel. Regardless of the motive, an arson fire outside a local yeshiva has left residents badly shaken. "As a result of occurrences like this, it just adds to the fire-if I dare say-of these occurrences happening and happening and other times when people do know what they're doing. That's what we're worried about," New York State Senator Simcha Felder said. Police are offering a $3,500 reward for information leading to an arrest. Anyone with information in regard to this incident is asked to call the NYPD's Crime Stoppers Hotline at 1-800-577-TIPS (8477) or for Spanish, 1-888-57-PISTA (74782). MORE NEWS | Name that pooch: New York Islanders adopt 3rd 'Puppy with a Purpose'

She most likely bought that gas 5 mins before doing this. EASY CATCH!! I'll give "Gasgirl" 3 more days freedom.

She's not mentally defective. She targeted the Jewish community purposely! otherwise she would've set anything on fire!! Common sense shows this is a targeted "HATE" crime. Deal with her according to the law's of hate crimes.

she need to caught and thow in jail with the full book .every time evil show its color they cry Mental Illness it could be worse thank God it wasn't.

Officials say a man is in custody after stealing a school bus and crashing into several parked cars along the way.
BROOKLYN, NY・18 HOURS AGO
ABCNY

Police said when she asked the man why he hit her, he responded by making anti-Asian slurs.
NEW YORK CITY, NY・20 HOURS AGO
ABCNY

A 17-year-old student was arrested with an apparent ghost gun and cash in his bookbag inside a public school in Downtown Brooklyn.
BROOKLYN, NY・1 DAY AGO

"It was a gas leak," one resident told Eyewitness News. "I smelled it when I got home from work. I reported it. They ignored it and this was the result. This is what we get."
BROOKLYN, NY・2 DAYS AGO
ABCNY

Before starting his training as a firefighter, Vincent Malveaux worked as an EMT for four years including throughout the coronavirus pandemic.
NEW YORK CITY, NY・5 HOURS AGO
ABCNY

Suffolk Officer Tim Thrane, who spent weeks in a medically induced coma after being hit by an alleged drunk driver, was discharged to cheers Friday.
SUFFOLK COUNTY, NY・1 HOUR AGO
ABCNY

A New Jersey police officer accused of killing a pedestrian and then taking the victim's body to his home was allegedly driving intoxicated, according to court documents.
NEWARK, NJ・2 DAYS AGO
ABCNY

The teen's family said he has big dreams to go into real estate and had been helping at his father's business on the weekends when he's not in school.
BROOKLYN, NY・2 DAYS AGO
ABCNY

They are accused of slapping a 3-year-old boy across the face last Friday. Police say the women approached an 18-year-old girl Sunday and pulled her to the ground.
BROOKLYN, NY・2 DAYS AGO

Officials are investigating how an anti-vaccination ad, designed to look like a New York City ad encouraging vaccination, somehow ended up in a bus stop in Brooklyn.
BROOKLYN, NY・1 DAY AGO
ABCNY

Footage shows a man wearing an NYPD sweatshirt with a badge hanging around his neck push his way inside.
BRONX, NY・3 DAYS AGO
ABCNY

Passaic police say that they have identified Ernest Fuentes as one of the gunmen and have issued a warrant for his arrest.
PASSAIC, NJ・2 DAYS AGO