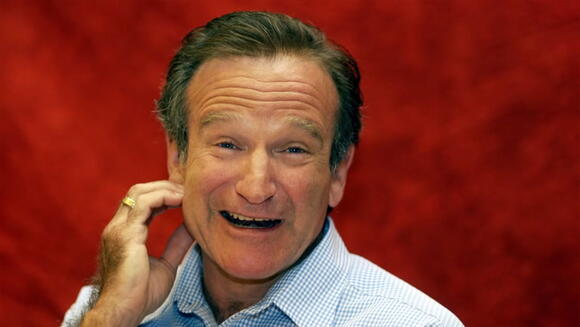 Zelda Williams , the daughter of Robin Williams , has asked people to stop sending her the viral video of an actor impersonating her father.

Earlier this week, Jamie Costa shared a five-minute clip in which he channels the late comedian. The video has since amassed nearly 4.5 million views, with many viewers commending Costa for his performance .

However, Zelda has asked people to stop sending her the clip.

“Guys, I’m only saying this because I don’t think it’ll stop until I acknowledge it,” she said. “Please stop sending me the ‘test footage’. I’ve seen it.”

The 32-year-old added: “Jamie is SUPER talented, this isn’t against him, but y’all spamming me an impression of my late dad on one of his saddest days is weird.”

Costa – who starred in 2016’s Star Wars: Origins – shared the video to YouTube under the title “ROBIN Test Footage Scene” on Tuesday (12 October).

In the scene, Costa portrays Williams on 5 March in 1982, the day he learned from his Mork & Mindy co-star, Pam Dawber, that his friend and fellow comic John Belushi died of an overdose hours after they had been together.

In the 2018 documentary Robin Williams: Come Inside My Mind , Dawber recalled how she had broken the news of Belushi’s death to Williams.

“We just walked together toward our trailers and just before he went into his trailer, I said, ‘If that ever happens to you, I will find you and kill you first,’” she said. “And he said, ‘Dawbs, that’s never gonna happen to me.’”

Archival footage featured in the documentary sees Williams open up about Belushi’s death and how it helped him get sober.

The Good Will Hunting star said: “Here’s this guy who’s a beast, who could do anything, and he’s gone. That sobered the s*** out of me.”

Zelda – who is an actor – is one of the comedian’s three children.

This article was amended on 22 October 2021 to change an incorrect reference to Jim Belushi. It should have referred to John Belushi.

A resurfaced clip of Prince William and Prince Harry reminiscing about their late mother Princess Diana has gone viral online amid news of a royal rift between the brothers.The viral video, which has been viewed more than 1.6m times since it was posted last January, shows a scene taken from the 2017 documentary, Diana, Our Mother: Her Life and Legacy.The film, broadcast by ITV in the UK and HBO in the US at the time, follows the Prince of Wales and the Duke of Sussex as they looked back at moments from their mother’s life on what was the...
2 DAYS AGO
The Independent

The Princess of Wales has posted a throwback family photograph of herself as a baby with her father, Michael Middleton.The sweet snap shows baby Kate Middleton smiling and reaching out to grab her father’s face. It was released as part of Kate’s new Shaping Us campaign to highlight the importance of early years development.Shared on the official Prince and Princess of Wales’ Twitter account, Kate wrote in the caption: “’Faces are a baby’s best toy’. On Tuesday we launched Shaping Us to raise awareness of the vital role our early years play in shaping the rest of our lives.”She...
11 HOURS AGO
The Independent

Simu Liu praised for giving advice on accounting, burnout and relationships on Twitter

Simu Liu has opened an impromptu “advice corner” on Twitter and shared his thoughts on questions about accounting, careers and relationships.The Shang-Chi star, who previously worked as an accountant at Deloitte in Toronto, responded to a fan who asked him for help with his accounting homework.The fan pleaded on Friday (3 February): “I don’t know what the f*** I’m doing…”Liu, 33, replied on Saturday: “Hey, I know I’m a little late, but how can I help?”He proceeded to answer questions from other people, which ranged from explaining what an accrual is to helping someone get over their ex.Liu’s relationship...
8 HOURS AGO
The Independent

Rachel Stevens has moved out of the home she shared with her ex-husband Alex Bourne, half a year after announcing they have separated.The former S Club 7 singer shared her feelings about the move in a new Instagram post and thanked her friends and followers for supporting her.Stevens, 44, announced in July 2022 that she and Bourne have made the “difficult decision” to separate after 12 years of marriage.In her latest post, she shared a selfie and wrote: “What a week it’s been… Sorry I’ve been MIA [missing in action]. I’ve just moved home today and I’m up to my...
9 HOURS AGO