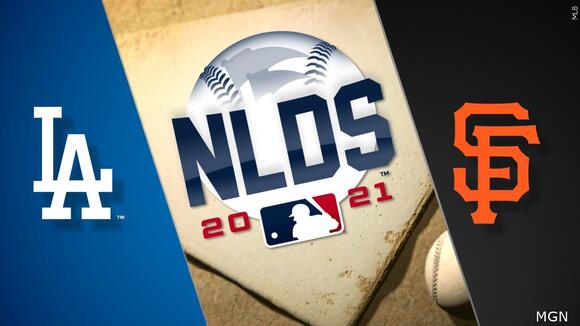 The Los Angeles Dodgers are going to the National League Championship Series!

The Dodgers beat the Giants in San Francisco in a critical and nerve-racking winner-take-all Game 5 of the National League Division Series.

The game was 0-0 up until both teams scored in the 6th inning.

Former MVP Cody Bellinger stepped up and was the big hero of the night, driving in the go ahead run in the top of the 9th.

Max Scherzer, Los Angeles' big acquisition at the trade deadline, came in at the bottom of the 9th to get his first career save.

The Dodgers will face the Atlanta Braves. The series starts Saturday in Atlanta.

The post Dodgers beat Giants to advance to the NLCS appeared first on KESQ .

There is plenty of interest in the list of big-name free agent shortstops, but what about one of the teams at risk of losing one of those players?. The Los Angeles Dodgers may have an opening at shortstop, as Corey Seager is among the highly-touted free agents on the market. The Dodgers are trying to bring back Seager, according to Jon Heyman of MLB Network, but are not showing interest in any other shortstops.
NFL・11 DAYS AGO
ClutchPoints

Mark Berman, of Fox 26 Houston, got an inside scoop on who has reached out to Carlos Correa and his agent. According to Berman, Correa’s agent has heard from the New York Yankees, Boston Red Sox, Los Angeles Dodgers, Chicago Cubs, and the Atlanta Braves. It would make sense for...
MLB・2 DAYS AGO
Dodgers Nation

The MLB qualifying offer deadline came and went on Wednesday and as expected, Chris Taylor officially opted for free agency. The coveted utility man enters the market coming off his first career All-Star Game selection and a strong postseason where he led the Dodgers with a 1.202 OPS and four home runs. With his elite positional versatility and plus bat, a robust market is already forming around the former NLCS MVP.
MLB・13 DAYS AGO
Inside The Dodgers

The collective bargaining agreement between Major League Baseball's owners and the players is set to expire on Wednesday night. It is assumed an agreement won't be reached in the coming days, meaning free agency and trade talk will be completely shut down and a lockout will be put in place. In the meantime, perhaps there will be a flurry of moves, as there might be some players who don't want to go several weeks (months?) without knowing where they'll play in 2022.
MLB・5 DAYS AGO
FanSided

For the better part of the last decade, the Los Angeles Dodgers have largely been unencumbered by their division opponents. The emergence of the San Francisco Giants in 2021, however, changed all that. From 2015 until the start of 2021, the Giants, San Diego Padres, Colorado Rockies and Arizona Diamondbacks...
NFL・13 DAYS AGO
Sportsnaut

As the 2021 season concludes, baseball fans and teams are excited for the exciting crop of MLB free agents who
NFL・2 DAYS AGO
dailydodgers.com

The free-agent market for Max Scherzer is heating up, with multiple teams pursuing the three-time Cy Young winner. Per MLB Network's Jon Heyman, Scherzer is expected to make a decision before the current collective bargaining agreement expires at 11:59 p.m. ET on Dec. 1, with the Los Angeles Dodgers, New York Mets, San Francisco Giants and Los Angeles Angels among those in the mix.
MLB・5 DAYS AGO

Corey Seager officially signed with the Texas Rangers on Wednesday. Soon after, AM570's David Vassegh informed listeners that for a while now, he had been holding onto some insider information. Apparently, before the 2021 season began, Seager rejected an eight-year, $250 million contract extension ...
MLB・2 DAYS AGO
Inside The Dodgers

For the past seven years, Los Angeles has been Corey Seager's home. Now, after signing a huge deal with the Texas Rangers, 10 years $325 million, he's begun a new chapter in his life and will be joining Dodgers' former third-base coach Chris Woodward at Globe Life. With the Rangers signing a number ...
MLB・1 DAY AGO
Black Enterprise

Potentially enlarging his ownership holdings big time, LeBron James and the Fenway Sports Group (FSG) announced plans to acquire the Pittsburgh Penguins. The group has agreed to purchase a controlling stake in the National Hockey League team. The sale calls for FSG to spend about $900 million, Sportskeeda reported. The...
NBA・2 DAYS AGO

From 1995 to 2012, Chipper Jones was the face of the Braves, bringing the organization a World Series and an MVP award. It was a somber day for Braves fans when he finally hung it up, but Jones knew he was leaving the organization in good hands, passing the torch to Freddie Freeman, and it’s remarkable how similar their careers have been thus far.
MLB・23 DAYS AGO
FanSided

Free agent Freddie Freeman’s latest Instagram post sure sounded like goodbye to Atlanta Braves fans, even if it wasn’t. If this isn’t goodbye, then Freeman owes fans an explanation because…what the hell?. The greater likelihood is that Freeman is trying to thank Braves fans for a wonderful season, in which...
MLB・26 DAYS AGO
fadeawayworld.net

Whenever the Los Angeles Lakers and Los Angeles Clippers match up, there is always some excitement from fans worldwide, but also in the city of Los Angeles. Those two are generally considered big-market teams who are city rivals, and with that comes a lot of attention. While the Lakers-Clippers game...
NBA・1 DAY AGO
sportstalkatl.com

As MLB Trade Rumors reported it, the Braves coughed up a lot of money for one of the only viable options at catcher on the free-agent market:. According to their sources, the Marlins were in on new Braves catcher Manny Pina before the Braves doubled the money Miami offered:. Pina...
MLB・16 HOURS AGO
Sportsnaut

Carlos Rodon is coming off a breakout season with the Chicago White Sox, who won the AL Central for the
MLB・2 DAYS AGO
San Diego Union-Tribune

The Atlanta Braves have tendered a contract to slugger Adam Duvall, ensuring the National League RBI leader returns to the World Series-winning club for another season
MLB・2 DAYS AGO
FanSided

Chicago White Sox: This NL team would be perfect for Carlos Rodon

The Chicago White Sox are in a weird spot. They didn’t give Carlos Rodon a qualifying offer and he is now free to sign with any team in Major League Baseball. With the year that he had in 2021, it is fair to assume that he is going to get a fairly lucrative deal on the market. Scott Boras is also his player agent which should mean that he has a fair amount of money coming his way.
MLB・2 DAYS AGO
Inside The Blue Jays

The Blue Jays reportedly discussed a trade involving Randal Grichuk and Jackie Bradley Jr. with the Milwaukee Brewers, per reports
MLB・20 HOURS AGO