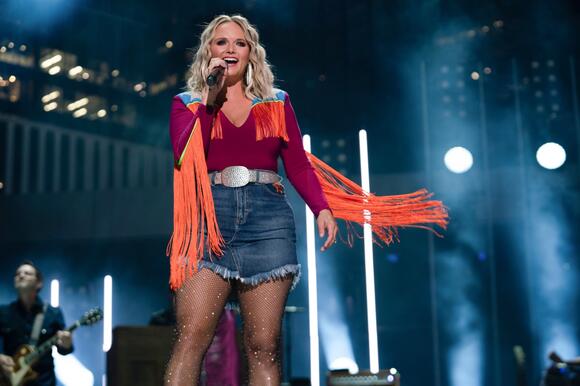 Miranda Lambert dials up the Wild West imagery in a brand new song. “If I Was a Cowboy” is peppered with references to wanted posters, tumbleweeds, and six-guns, and is the country singer’s first solo single since “Settling Down,” off the Wildcard album.

“If I was a cowboy, I’d be wild and free / rolling around these towns like tumbleweeds,” Lambert sings in the chorus, dreaming of wide-open expanses and endless opportunity and boasting about her rebellious streak: “You thought the west was wild / but you ain’t saddled up with me.”

The payoff line comes with a gender-flipping wink — “If I was a cowboy, I’d be the queen,” she proclaims.

“If I Was a Cowboy” is Lambert’s first new solo music in two years. In February, she teamed up with Elle King for King’s drinking-and-dancing song “Drunk (And I Don’t Wanna Go Home)” and collaborated with Jack Ingram and Jon Randall for The Marfa Tapes , a stripped-down album that dropped in May. In August, she worked with DJ Telemitry (the Nashville producer Jesse Frasure) to produce the first remix of her career, the Wildcard track “Tequila Does.”

Lambert wrote “If I Was a Cowboy” with Frasure. “We met doing the remix of ‘Tequila Does’ and he and I just got together one afternoon for a write and this is what came out of it,” Lambert said in a statement. “It’s funny, he’s a Detroit boy and I’m an East Texan, but somehow we wrote a song about the Wild West together.”

Lambert is the most nominated woman in CMA Awards history: She’ll compete in three categories at the November 10th ceremonies in Nashville and has two more live dates scheduled for the year, including an appearance at the Tortuga Music Festival in Fort Lauderdale, Florida, on November 12th.

Tori Kelly finds comfort in her “North Star” in the first single from Zoey’s Extraordinary Christmas Playlist, the holiday movie spin-off of Zoey’s Extraordinary Playlist. The track (which is available for preorder) and the Roku Channel film arrive on Wednesday. Produced by Harvey Mason Jr., and written by cast member Mary Steenburgen, Caitlyn Smith and Troy Verges, the song finds Kelly singing of a holiday gathering in the wake of loss. “I’m always looking up, ’cause I can feel your love and I know just where you are in the sky and in my blood,” she sings. “And I’ve never been...
MOVIES・2 DAYS AGO
Rolling Stone

The Supreme Court on Wednesday heard a Mississippi case that could overturn Roe v. Wade. After almost two hours of oral argument, it’s clear that the fate of nationwide legal abortion is now in the hands of Justice Amy Coney Barrett. That’s not good news for the future of abortion rights. The case argued today involved a ban on abortion at 15 weeks of pregnancy. Roe and subsequent Supreme Court cases had been entirely clear that states could not ban abortion before “viability,” a medical term indicating when a fetus has developed enough that it could survive outside a woman on...
CONGRESS & COURTS・1 DAY AGO
Rolling Stone

Lauren Boebert Confirms Her Apology to Ilhan Omar Was Bullshit

It turns out that Rep. Lauren Boebert’s Twitter apology to Rep. Ilhan Omar for making anti-Muslim remarks may not have been so sincere. The conspiracy theorist from Colorado posted an Instagram video on Monday recounting a call she had with Omar to discuss the remarks. Boebert claimed that she never wanted anything she said to “offend someone’s religion.” Omar then asked Boebert to make a public apology for an extended rant in which Boebert suggested Omar was a potential terrorist, to which Boebert asked Omar to apologize for her “anti-American, antisemitic, anti-police” rhetoric. Boebert says Omar then hung up the phone....
CONGRESS & COURTS・3 DAYS AGO
Hello Magazine

Miranda Lambert has been keeping a low profile over the past week but that hasn't stopped her fans from checking in on her to make sure she's okay. The award-winning star was inundated with supportive messages urging her to "be safe" over the Thanksgiving weekend, as she shared a heartfelt message with her followers.
CELEBRITIES・1 DAY AGO

Kelsea Ballerini has been all over TV this week promoting her new book of poetry, and she shared an embarrassing moment with Drew Barrymore on her talk show about being at an industry party and things getting a bit sticky with Miranda Lambert. Kelsea offered, “I don’t really know Miranda;...
CELEBRITIES・14 DAYS AGO
People

Nicole Kidman stepped out in style alongside husband Keith Urban at the 2021 CMA Awards. The Nine Perfect Strangers actress, 54, set the red carpet on fire as she showed off her midriff in an edgy cutout Saint Laurent by Anthony Vaccarello gown at country music's biggest night in Nashville on Wednesday.
CELEBRITIES・22 DAYS AGO
WSMV

On This Date: Miranda Lambert Releases The Ultimate Double Album, ‘The Weight of These Wings,” In 2016

Miranda Lambert has had some great November album releases over the years. Her 2011 album Four The Record, which contained the smash hit “Mama’s Broken Heart” and the ever heartbreaking “Over You,” the Pistol Annies’ 2018 album Interstate Gospel, and one of her best albums, her 2019 release Wildcard, were all released in November.
MUSIC・14 DAYS AGO

Miranda Lambert has announced her annual Share The Love campaign, which gives back to animal shelters. Twenty lucky shelters will each receive a $1,000 from her non-profit, MuttNation. The grant goes to randomly selected individuals who have supported their local shelter by volunteering, fostering or adopting a shelter pet in the past year.
ADVOCACY・9 DAYS AGO
Hello Magazine

Carrie Underwood and Miranda Lambert have both been nominated for two Grammys, capping off an incredible year for the pair. Both singers are nominated in the best country duo/group performance category; Carrie for her duet with Jason Aldean, and Miranda for her work with Elle King. WATCH: Miranda Lambert shares...
MUSIC・9 DAYS AGO
Whiskey Riff

Miranda Lambert is already in the giving spirit this year. With Thanksgiving being tomorrow and the holiday season officially upon us, she’s finding ways to give back through her foundation, MuttNation, and support local animal shelters across the country. They’re planning to give away $1,000 to 20 different animal shelters...
PETS・8 DAYS AGO
HollywoodLife

The Best and Worst Dressed Celebs at the 2021 CMAs: Red Carpet Photos of the Country Music Awards

The best and worst dressed celebrities at the 2021 Country Music Awards definitely made a statement. Stars like Miranda Lambert, Mickey Guyton and more walked the CMAs red carpet in stunning fashions, while others had a bit of a wardrobe miss. The 55th annual awards show, which took place on...
NASHVILLE, TN・22 DAYS AGO
Outsider.com

Miranda Lambert to Gift $1,000 to 20 Animal Shelters Through MuttNation’s ‘Share the Love’ Campaign

Country music star Miranda Lambert and her nonprofit MuttNation are donating upwards of $20k to animal shelters. Miranda’s love for animals has always played an important role in her life. Ever since adopting her first pup, Delilah, from a local shelter, she’s been a dedicated advocate for animals. A total...
ANIMALS・9 DAYS AGO
995qyk.com

Carrie Underwood posted a promo picture for her new Las Vegas residency that kicks off tonight (12/1) at Resorts World, and the outfit she’s wearing is quite revealing. Carrie is wearing a black see-through jumpsuit with her neckline showing almost to her belly button, and fans on Twitter are loving the look. One fan wrote in response, “I mean dayum girl slayyy!!!!” Another fan said, “When I tell you my jaw dropped… HOLY WOW.”
CELEBRITIES・1 DAY AGO
undertheradarmag.com

Wild Pink have shared a new song titled “Florida,” a nine-minute ode to frontman John Ross’ home state. Listen below. “‘Florida’ is a love letter to the state I grew up in,” states Ross in a press release. “It has a bad reputation, which is well deserved, but I think it’s also a misunderstood state. It’s got its own thing going on if you look hard enough and the natural beauty there is unreal. Florida is a rewarding place if you spend the time finding its charm. I grew up listening to a lot of Florida bands like I Hate Myself and Shai Hulud, which was really formative for me early on.”
FLORIDA STATE・2 DAYS AGO

Carrie Underwood's exciting update on her much-loved activewear brand, CALIA, was tainted with something unexpected on Friday, when she revealed her new winter range, would be her last. The star looked glowing in new snapshots promoting the line and all the new holiday collection pieces. But fans were saddened to...
BEAUTY & FASHION・6 DAYS AGO
musictimes.com

Carrie Underwood Marriage In Crisis: Singer and Mike Fisher Nonstop Bickering Over THESE?

Carrie Underwood and her husband, Mike Fisher, are said to be having marital difficulties. According to the National Enquirer, the couple hasn't stopped arguing over little topics. During the lockdown, Carrie and Mike's marriage was said to be working out well for them and their children, but once the country...
TROUBLE RELATIONSHIP・18 DAYS AGO
Footwear News

For Kelly Clarkson‘s lastest appearance on NBC’s “The Voice,” the iconic singer and judge brightened up the room in a colorful blue gown with crystal details, plus pearls draped around her neck and sparkling heels. The host of “The Kelly Clarkson Show” donned a satiny blue tiered gown featuring long sleeves, a plunging neckline with a ruffled collar and a crystal waist belt from Monique Lhuillier. She styled the vibrant gown with a dramatic pearl necklace with an embellished choker design as well as some rings and earrings. For shoes, the 39-year-old hitmaker selected a pair of glittering pointy-toed silver pumps from celeb-loved designer Amina Muaddi. Clarkson has become known for her glamorous looks on the singing competition show and often opts for gowns in bright colors and bold prints. Just a couple of weeks ago, she donned an attention-grabbing hot pink Jenny Packham gown embellished with beading and feathers. Shop Amina Muaddi pumps with sparkling details below. To Buy: Amina Muaddi Gilda Embellished Satin Sandals, $921; mytheresa.com To Buy: Amina Muaddi Dory Glass Mules, $1,301; harrods.com To Buy: Amina Muaddi Emili Crystal-Embellished Satin Mules, $1,210; modaoperandi.com Flip through the gallery to see Kelly Clarkson’s style evolution through the years.
CELEBRITIES・1 DAY AGO
Hello Magazine

Nicole Kidman rarely talks about her relationship with her oldest daughter, Bella, but it looks like the star has the seal of approval from her offspring. In a rare public exchange, Bella showed support for her mother as she shared an exciting moment on Instagram recently. Nicole posted a snapshot...
CELEBRITIES・27 DAYS AGO